The defining characteristic of Maine-style clam chowders is that traditionally they’re made with milk and never thickened with flour. In comparison to other types of clam chowder in New England, the northernmost New England versions are on the thinner and brothier side of the chowder spectrum. This doesn’t mean a milky Maine clam chowder isn’t hearty and delicious! It’s still a chowder and chowders by their very nature are more akin to stews than soups.

The recipe below is featured in my new cookbook, New England Soups from the Sea, and includes seventeen other chowder recipes!

A Little Bit About Steamer Clams

Maine was once considered the soft-shell clam capital of the country. Historically, hard shell clams did not grow as prolifically as in other parts of New England due to the icy cold wintry waters (though due to global warming that is now changing). Soft-shell clams, being quite adaptable to northern winters, were just as common to chowder pots as quahogs.

How to Prepare Steamer Clams for Chowder

Steamers do take a bit more preparation than hard-shell clams, which is probably why they’ve never caught on south of Maine. For starters, they accumulate a good bit of sand and grit inside their shells, which don’t tightly close like other types of clams. Rinse them in cold water and then place them in a pot and cover them with cold water. Soak them for a few minutes, stir them around gently once or twice, drain the water and then repeat this a few times more until there’s no grit left. If you plan ahead, an extended soaking of several hours in saltwater (add about 1/4 cup salt per quart of water) or even overnight is even better. Discard any with cracked or damaged shells.

When you’re ready to make the chowder, you’ll first need to prepare the clams by steaming them in a little water. This will also create the broth. Bring 1 cup of water to a boil in a fairly good-sized stockpot and add the clams. Steam for about 5 minutes or until the shells open widely. Stir the clams once or twice to steam evenly being careful not to crack the brittle shells.

In case you’re wondering, there are no store-bought canned soft shell clams or bottled soft shell clam juice products. Good! Trust me, those tender clam meats and that beautiful broth can only be had by making them yourself. I can’t help but stick my nose in the pot when they’re steaming. Man does it smell delicious, like a fresh salty breeze coming off the ocean.

Once the shells open, immediately remove the pot from the heat. Remove the clams and strain the broth through a fine-mesh strainer. You should get about 3 to 4 cups of broth. Set the broth aside and reserve. You’ll get a cloudy, grayish-looking broth, but what it lacks in appearance, it more than makes up for in fabulous flavor.

Steamer clams also have a long attachment called a “siphon” which has a slimy protective skin that needs to be pulled off after steaming. Though edible, the siphon can be tough and chewy. Its black color doesn’t make it look particularly appetizing either. Slice it off, if you prefer (which also means you won’t have to remove the skin). For these reasons, steaming more than a few pounds at a time can get a bit unwieldy. But I promise you, it’s worth the effort!

My Version of a Maine Clam Chowder

This recipe is included in New England Soups from the Sea, as well as 17 more chowder recipes. While I stuck to tried and true formulas for many of the chowder recipes, I took a few creative liberties with a Maine clam chowder. First, I used half and half instead of milk, which as I discussed in my traditional oyster stew post, is closer to the rich flavor of raw, old-fashioned whole milk than today’s highly processed supermarket whole milk. (Note: if that concerns you for health reasons, please check out my post, Is Clam Chowder Healthy?)

Second, I only used butter as the cooking fat and I used a fairly liberal amount. Typically, salt pork or bacon are first rendered for their fat but I didn’t want any pork flavor to interfere with the sweet briny flavor of the broth or the clams themselves.

Third, I did not slice off the siphon after I steamed the clams. I didn’t mind that they were a little tough. I actually liked having the opposing textures of the soft juicy clam belly alongside the chewier siphon. It should also be noted that the smaller the steamer clams the more tender the siphons.

Fourth, I didn’t chop the clam meats but rather left them whole. Soft-shell clam meats don’t slice apart as neatly as hard-shell clams which tend to be tougher. I love keeping the soft meats intact even though it means you won’t be scooping up little bits of clam meat in each spoonful.

And lastly, though I’ve left the addition of lemon juice as optional, I loved it. A squeeze of lemon juice isn’t completely unusual in chowders around New England but it’s never appealed to me in the least. This recipe is the exception, perhaps because my brothy, buttery, and lemony version is a bit of a hybrid between a chowder and a bowl of steamed soft-shell clams. And in a weird way, I think it works beautifully. 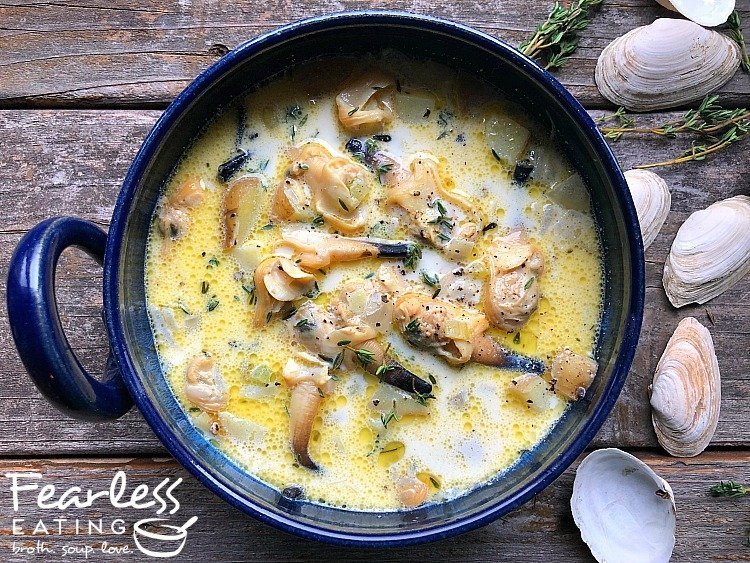