Something unexpected happened in the process of writing my next soup cookbook. I fell in love with clam juice. Yes, I can hear the collective voice of America saying, “Clam juice? Are you serious?! Gross.”

But in testing over 100 seafood soup recipes for New England Soup from the Sea (now available!), it became my absolute favorite broth. Please understand, despite it being labeled as a juice (more on that below), it is a broth! I actually love it more than chicken broth, beef broth, fish broth, or even lobster broth.

Unfortunately, most people only know clam juice as something they buy in bottles from the supermarket or as the overly clammy juices from canned clams.

But consider that legendary chef, Howard Mitcham, once called clam juice from quahog clams, “the most delicious part of the quahog…it is nectar – ambrosia – fit for the Gods on Olympus.” (source)

As a chef and gourmand, Mitcham wasn’t referring to the bottled stuff or god forbid, the juices from canned clams. So that begs the question…

What is Clam Juice?

Clam juice is just another name for the broth that results from steaming clams. Clams harbor intensely flavored liquids (sometimes called “liquor”) inside their shells.

When they are steamed in water, the shells open and release these liquids into the water, infusing it with a briny but fresh essence of the ocean.

This is clam juice.

Unlike other broths and stocks, it needs nothing to improve its flavor. It doesn’t require a mirepoix (a fancy French word for an aromatic base of lightly cooked carrots, onions, and onions). It doesn’t require herbs or spices. Heck, it doesn’t even need salt! Nor does it require hours of simmering. It is ready as soon as the clams open, which takes about 10-15 minutes.

It’s like Nature’s bouillon cube, but of course, without the nasty chemical flavorings.

When it’s made the right way, it has a clean, crisp, strong, salty flavor of the sea. There should be a fresh tang to it, kind of like the bite of an apple on a brisk autumn day. Its flavor is totally unique, unlike any other broth or stock. But like other broths and stocks, it has both soothing and nourishing qualities. However, it can also be quite invigorating too!

As far as I know, no one has ever analyzed the nutritional content of clam juice. But, clams themselves are a nutritional powerhouse, rich in omega-3s, vitamin B12, choline, iron, iodine, and selenium.

Certainly, some of those nutrients leach into clam juice too. What exactly and how much I can’t say for certain, but I’d guess the mineral content is quite high. It’s one of the many reasons consuming bone broth benefits our health. Of course, clam juice is not technically a bone broth, but culinarily speaking, it’s used in many similar ways.

This may sound strange but the next time you’re feeling depleted, sluggish, or even a little hungover, try a little clam juice as a tonic. Don’t laugh! This was not uncommon in America in the early 20th century before the rise of pharmaceuticals. In Japan, clam juice has been a hangover cure for centuries.

It has some seriously good juju to it, like one of those ancient Chinese recipes, passed down for thousands of years, with benefits that modern science can’t explain but everyone knows works. But again, I’m not talking about the clam juice in canned clams! I’m talking about clam broth.

It is the exact same thing. Now, why in God’s name it’s called “clam juice” instead of “clam broth” is a total mystery to me. If anyone out there can enlighten me, please share in the comments. Imagine chicken broth being labeled as “chicken juice?” Imagine calling fish stock, “fish juice?”

Seriously, who was the marketing genius behind labeling clam broth as “clam juice?”

Sheesh. No wonder clam juice gets a bad rap.

Besides the worst marketing name in food history, some brands of bottled clam juice are part of the problem too. They are way too fishy tasting. Like many cheap packaged stocks and broths, I doubt they are making clam juice from whole clams. That said, some brands are excellent!

Pictured are the five most popular brands in stores. These companies probably account for well over 90% of all bottled clam juice sales in supermarkets. You’d think they would all taste somewhat similar, but the differences between them are stark. I taste-tested all five and here are my results:

Bar Harbor tastes as close to a homemade clam broth as you can get. It’s strong but not overpowering and it has a clean, fresh aroma.

The color is a cloudy grey, as a good clam broth should be. You can’t go wrong with Bar Harbor clam juice.

It’s a versatile choice that can be used in any of the recipes below.

Cento is another really good choice though it may be a little harder to find in supermarkets compared to other brands.

The only negative, which isn’t a negative for me personally, but might be for others, is that it’s quite salty. The sodium content was double the other brands.

Now clam juice is supposed to be salty. But I did think it could be a little too much for some.

Nevertheless, it had a really good fresh, briny flavor and a clean aroma. If you don’t mind a strong saltiness, it’s a fine choice. For whatever reason, Cento is not currently available on Amazon but other online sellers may offer it.

The other three brands did not appeal to me, in the least. Crown Prince and Roland both had a fishiness that made my mouth pucker, exactly the type of flavor that gives clam juice a bad rap. And Snow’s was completely flavorless. It tasted more like a watered-down chicken broth than a clam broth.

How to Make Clam Broth

As convenient as the bottled stuff may be, should you ever buy fresh whole clams for a homemade recipe, such as clam chowder, you can easily make your own clam broth. Let me show you how to make clam juice at home!

You might be surprised by how many culinary uses there are for clam broth. My new cookbook, New England Soups from the Sea, pictured below, includes it in dozens of recipes. At the top of the list will, of course, be New England’s most iconic dish.

Chowder purists know that the key ingredient in any authentic New England clam chowder is not clams but clam broth. It’s the strong, briny flavor of clam broth that, when combined with cream, is the heart and soul of clam chowder.

Nevertheless, most New England clam chowder recipes don’t use real clam broth. Water, chicken broth, or the juices from canned clams (which are not from steamed clams) are quicker and cheaper substitutes. Don’t get me wrong, these substitutes can still make a decent bowl of clam chowder but not an awesome, heart-stopping, memorable one. Same goes for the many other types of clam chowder.

Yes, there’s more to clam chowder than just New England clam chowder. My cookbook will feature 18 different chowder recipes, 7 of which will be clam chowders! Of course, the first recipe will be an Authentic New England Clam Chowder.

Here are a few others that also use real clam broth:

Contrary to popular belief, there are many other types of clam soups besides clam chowder! Chapter 7 in my cookbook is titled, “Brothy Soups,” and includes 27 broth-based recipes, many of which use clam broth. Examples include a Spinach Tarragon Clam Soup, Clams Newburg Soup, a Traditional New England Clam Stew, and a few steamer clam soups will be featured. Some other examples of clam soups include the following:

You can substitute clam juice in soups and stews where the recipe calls for fish stock, lobster stock, or even chicken broth.

You might want a stronger flavor of the sea from a clam broth. Depending on tastes, it could be a full substitution or a partial one.

Furthermore, some soups include seafood that doesn’t make their own broth or stock, such as scallops. In this case, clam juice is a great choice.

That’s why it’s good to have some bottled Bar Harbor clam juice stocked in your pantry at all times! Examples are almost infinite but here are some of my recipes where it would make sense:

Clam boils are the 30-minute version of a clambake. Simply boil a bunch of clams, potatoes, onions, sausage, and any other seafood you want. Most recipes simply use water as the base. But my cookbook will feature 8 clam boil recipes that use half water and half clam broth to boost the flavor of the broth. One example would be a New England Portuguese Clam Boil.

Mussels make their own broth too but it’s not quite as strong as clams. Adding some clam juice can add some nice zing to almost any type of steamed mussels appetizer.

In many pasta and rice dishes, clam juice can helps brighten things up, kind of like fish sauce or soy sauce.

A shortlist of some of the more common seafood dishes where clam juice could be used include linguine with clam sauce, shrimp scampi, seafood fra Diavolo, any seafood risotto, or any seafood rice stir fry.

Forget that store-bought Clamato (a blend of tomato juice and clam juice) with its high fructose corn syrup, MSG, and Red #40 coloring. Just add some real clam juice to your Blood Mary (also called a Bloody Caesar) for a real spike in flavor! 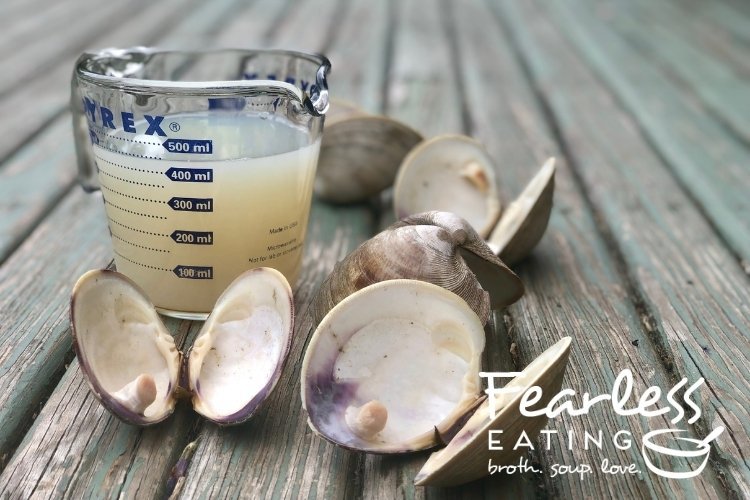 Making clam broth is as easy as steaming clams in water. This recipe will yield one quart of broth. 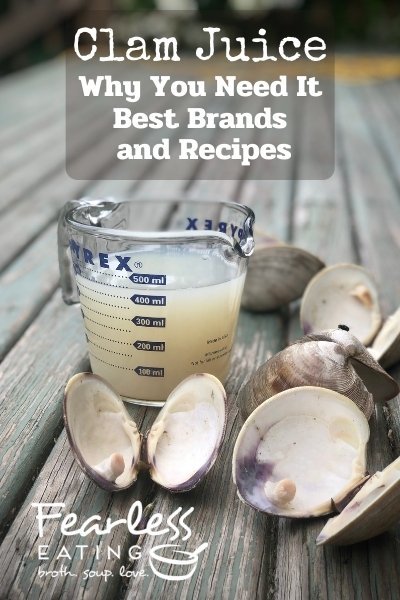