Portuguese immigrants came to New England in large numbers in the late 19th century and early 20th century. Most settled along the south coast of Massachusetts and Rhode Island where they found work in the fishing industry. Portuguese staples like tomatoes, onions, garlic, spicy peppers, and spices like cumin and paprika were integrated with local seafood and traditional soups and stews (such as Shrimp Mozambique, Portuguese squid stew, and Portuguese clam stew) took on new twists and turns.

In fact, it’s suggested that Portuguese clam chowder was the precursor to Manhattan clam chowder as tomatoes starting showing up in chowder recipes in Rhode Island and Connecticut in the late 19th and early 20th centuries. Though tomatoes in chowder mostly faded away in New England in the second half of the 20th century, it’s thought that they found a more welcoming home in the New York area where it eventually became the standardized dish we know today as Manhattan clam chowder.

Regardless of the murky history, here’s what I can say without a doubt: Portuguese clam chowder is one of the most fantastic chowders I’ve ever tasted! It’s included in my new cookbook, New England Soups from the Sea, along with 17 other New England-style chowders.

Compared to Manhattan clam chowder, it’s more piquant, richer, smoky, and spicy with whole littleneck clams that infuse the tomato base with a salty sea essence. Personally, I think it’s about a thousand times more delicious than Manhattan clam chowders which are often diluted by too many vegetables and not enough clams, especially fresh clams.

I don’t care what side of the chowder debate you’re on, red or white, you gotta try it to believe it. Your whole perception of chowder will be blown wide open, especially if you think red chowders are inferior to white. I promise you’ll have a newfound appreciation for red chowders. You’ll also probably wonder, as do I, how something this good has remained in relative obscurity for so long.

How to Make a Portuguese Clam Chowder

The beauty of Portuguese clam chowder is that you have to make it yourself. Maybe that’s why it’s such a secret as very few restaurants serve it. But it’s not hard because it’s chowder and the essence of chowder is that it’s a simple rustic dish, originally created by fishermen.

The full recipe is below but I can summarize how easy it is in four pictures.

First, you’re going to saute some onion, green pepper, garlic, and either chourico (pronounced chor-REES) or linguica sausage in olive oil for about 5 to 7 minutes. Chourico and linguica are pre-cooked, dried, and smoked sausages. The main difference is that chourico is spicier than linguica. Both may be hard to find in conventional supermarkets. Chorizo, a similar Spanish-style sausage, or even andouille are suitable replacements. I used BOTH linguica and chourico. The darker color sausage is the chourico.

Next, you’ll add some tomato paste and some fresh herbs and spices and saute everything for a further 2-3 minutes, stirring frequently.

Next, you’ll add some canned tomatoes and simmer everything for about another 10 minutes to amalgamate the flavors.

Then you’ll add your littleneck clams.

Cover the pan and simmer everything over medium heat for about 7 to 10 minutes or until the clams open. The liquid inside the clams (aka clam juice, clam liquor or clam broth) will infuse the tomato base creating a quintessential briny clam chowder flavor.

That’s pretty much it! I love finishing it off with some fresh tarragon and some apple cider vinegar for an even more bodacious flavor. Parsley or cilantro is great to use too as is red wine vinegar. And if you like things extra spicy, add any hot sauce of your choice and/or additional hot red pepper flakes.

You’ll also find chapters on stews, bisques, clam boils, and more. Approximately 20% of the 80 total recipes are Portuguese in honor of the longstanding Portuguese communities on the southern coast of New England.

Finally, if you make this recipe, I’d LOVE to hear your experience in the comments. Even better, if you’re of Portuguese descent, I’d love to hear your experience with this dish. Did your mother or grandmother make it when you were a kid? How did they make it that was different? Do you know of any restaurants that serve it? Any and all input is appreciated! 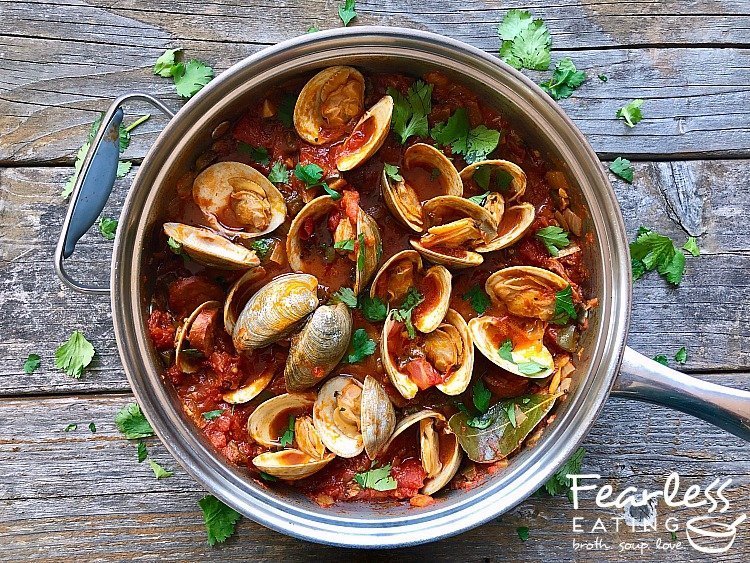 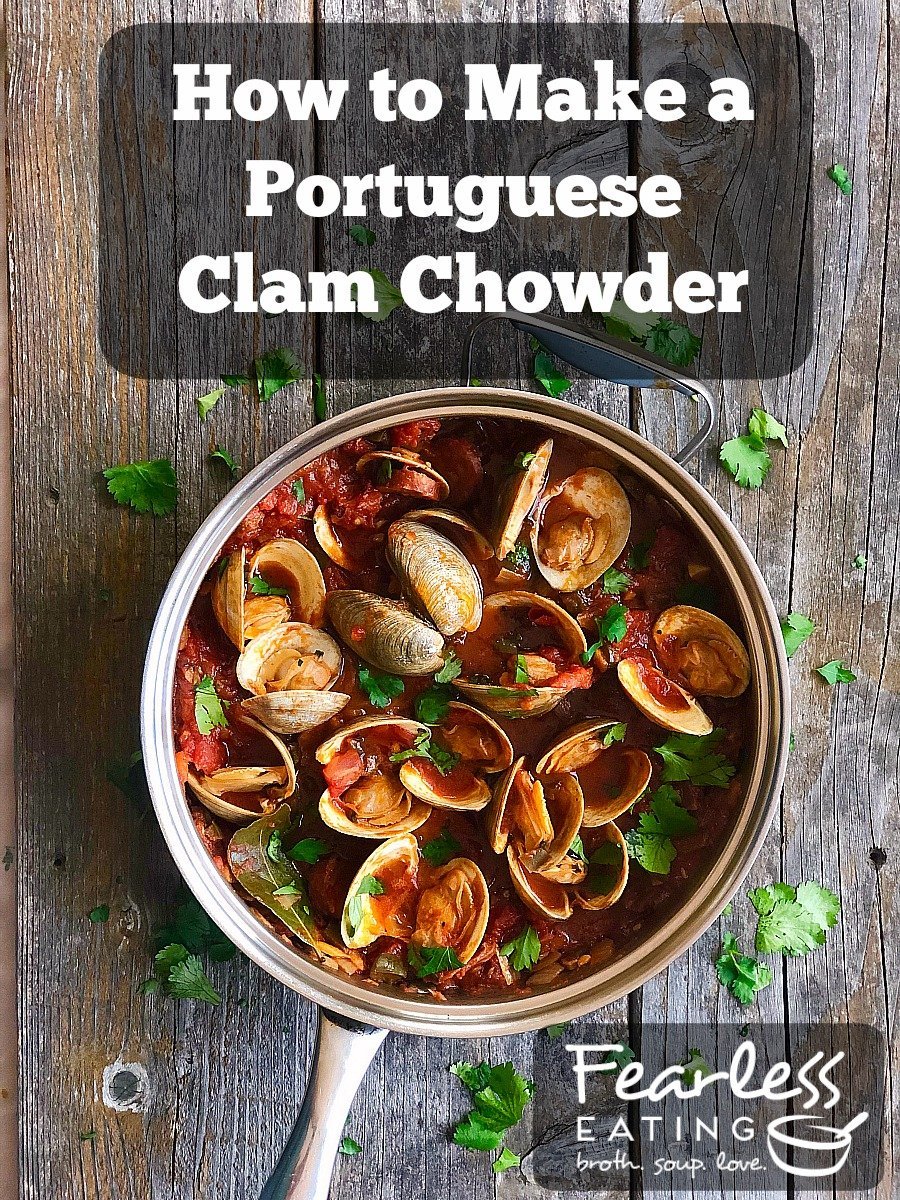