How to Make Boston Fish Chowder

Did you know that Boston fish chowder was the predecessor of New England clam chowder?

What is a Boston Fish Chowder?

It’s basically the creamy, flour-thickened style of chowder, similar to an authentic New England clam chowder, except, of course, with fish instead of clams.

Good quality versions of both Boston fish chowder and New England clam chowder are also united in their use of salt pork (or bacon), yellow onions, Yukon gold potatoes, and most importantly, real, homemade broths and stocks.

You can find the recipe below as well as many more chowder recipes in my cookbook, New England Soups from the Sea!

Before I get to the recipe, let me share two reasons why you should consider making a Boston fish chowder (instead of the more popular New England clam chowder) as well as two key recipe tips.

Two Reasons You Should Make a Boston Fish Chowder

I think there’s a reason most people prefer a clam chowder over a fish chowder – the tender, meaty texture of clams is just so good. But let’s face it. Most people don’t use fresh, whole clams when they make clam chowder. Rather, they turn to the convenience of canned clams.

Well, canned clams kinda suck (unless you like eating rubber).

They’re not nearly as juicy and tender as whole clams.

Well, with fish chowder, just go pick up any cut of fresh whitefish and you’re good to go. Really, it doesn’t matter what type of whitefish you choose. Cod and haddock are popular choices but almost any whitefish has similar, mild, clean flavors. Hake, pollock, blackfish, monkfish, halibut, tautog, or even flounder are all good choices too.

Clam broth, also known as clam juice, is pretty straightforward. Most people just buy it in jars, and you could certainly use it in lieu of fish broth in this recipe. But ideally, with a Boston fish chowder, you want to use a fish broth (also called fish stock) and that’s a great reason to learn to make your own.

1. Use salt pork instead of bacon

Salt pork is cured with salt and is fattier and saltier than bacon. It usually comes in a large block or slab. The extra fattiness is more ideal to use in chowder because the fat renders out, which makes for a great cooking fat at the same time adding a wonderful, smoky and salty flavor.

Salt pork is not always readily available in supermarkets so if you can’t find it, bacon is a suitable alternative. If you’re using bacon, try to find or use fattier pieces.

2. Flour is a great thickener

Adding some flour will create that classic, extra-thick texture that most people love. I certainly do. Make sure to add the flour to the salt pork, onions, and celery, as described below in the recipe. Many recipes call for adding the flour later in the process by first mixing it with water and then adding it to the soup. This has a tendency to both create lumps and too much of a pasty flavor.

Obviously, if you’re allergic or sensitive to gluten, you’ll have to skip using flour. Not to worry, this recipe will still be creamy and taste amazing. If you’re not going to use flour, throw in some extra potatoes and mash them on the side of the stockpot. The starch from the potatoes will help thicken the soup.

How to Make a Boston Fish Chowder 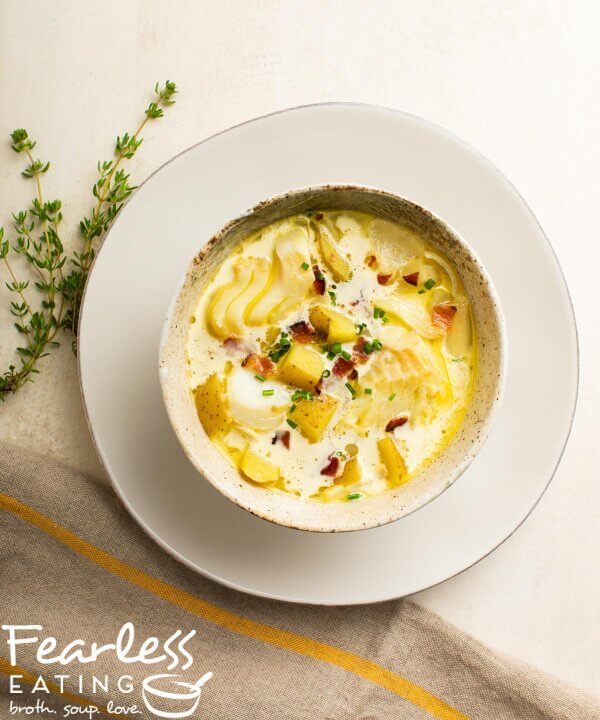 The predecessor of the more famous clam chowder, this recipe is almost exactly the same except for the use of fish and fish broth.

Boston fish chowder may be the most popular style of fish chowder in New England but there are styles and recipes too! If you want to up your chowder game and try something different, check out my Bluefish Chowder or my Portuguese Fish Chowder recipe.