Rather, it’s best appreciated by hardcore seafood lovers. It’s a really strong, briny, salty chowder. Also, just a warning but never tell a New Englander your chowder includes coconut milk or nut milk. Just don’t. Trust me on this one. You will be ridiculed. Probably not to your face (though maybe) but definitely behind your back.

When All Chowders were Dairy-Free

It’s true. The original New England chowders of the 18th century were fish chowders made with water. Clams and dairy were added somewhere in the middle of the 19th century and didn’t become a standardized New England recipe until the 20th century. So the dairy-free version found in Rhode Island (and parts of coastal Connecticut) may in fact be closest to the original chowders of the 18th century.

Perhaps when this dairy trend started, parts of Rhode Island were either insulated from it, resisted it, or just maintained the tradition of dairy-free chowders. Whatever the cloudy history, today, on the southern coast of Rhode Island, this is the preferred style of chowder, a clear broth chowder.

That would be quahogs. They are the quintessential hard shell clams of New England. Quahogs are also known as chowder clams because they are the largest of the hard shell clams and are ideal for use in chowders. Other types of hard-shell clams are technically also quahogs (quahogs are a species of hard-shell clam), though they’re named based on their size. Cherrystone clams are the second-largest while littlenecks are the smallest.

Now I won’t send out the chowder police if you choose to use canned clams. Canned clams, though convenient, easily turn tough and rubbery. They also lack the clam bellies, which contain most of the flavor of the clam meat. Nor are canned clams true quahogs. Canned clams are almost always sea clams, a different species of clam, that are harvested from the ocean floor through dredging. Quahogs mostly come from sustainable aquaculture farms, run by small businesses.

Companies sell these juices as bottled clam juice but most of them are watered down. But when you make a chowder with quahogs, there’s no reason not to make clam juice yourself by steaming the clams in water which creates clam broth. Clam broth and clam juice are pretty much the same things. It’s ridiculously easy and takes about 10 minutes tops! Here’s how to do it…

How to Make Clam Broth

I should also mention that fish broth is sometimes used instead of clam broth. Fish broth is also a fine choice though your dairy-free clam chowder won’t be as strongly flavored. However, a real homemade fish broth has a more rounded flavor as it typically includes vegetables and herbs.

Either way, you can’t go wrong!

How to Make a Rhode Island Clam Chowder 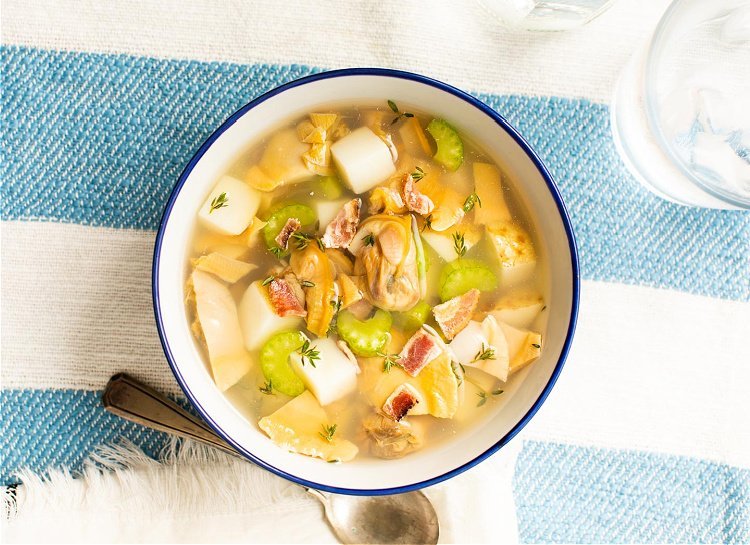 A gluten and dairy-free clam chowder recipe, Rhode Island clam chowder is for true seafood lovers, It has a strong briny and salty flavor and is a great alternative to the more common cream and tomato-based chowders. 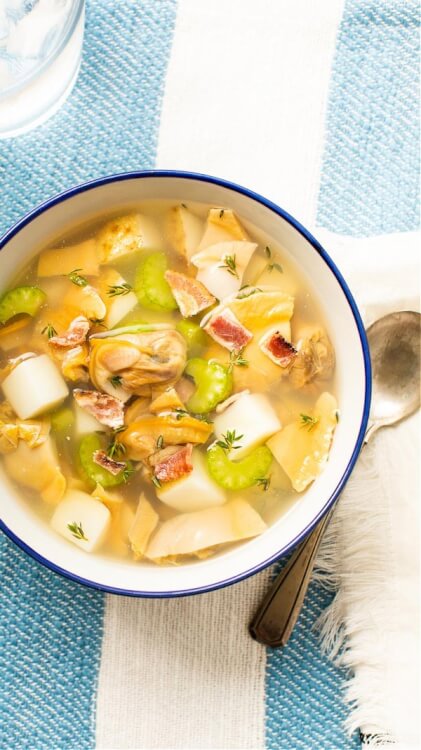