Long Island Clam Chowder: What It Is and How to Make It

If you have strong opinions about chowder you might freak out when you learn about a Long Island clam chowder. Judging from the cover pic you’re probably already a little alarmed. Yeah, it’s pink. I know, strange, isn’t it?

We all know chowder allegiances run deep in the Northeast. Everyone claims the version they grew up with is the REAL version and anyone who likes anything else is a heathenistic putz. If you’re passionate towards a particular regional type of clam chowder, just the idea of a Long Island clam chowder may set off ripples of scorn and quite possibly, waves of anger. To that I say, “GOOD!”

That means I like you. I like anyone who is passionate about food. I want to see your face turn red when you defend your regional food favorite, whatever it may be – pizza, subs, chowder, etc. I want to hear a chorus of expletives and wild hand motions as you stake your position. For example, if you tell me anything other than a New York bagel is a bagel I will immediately descend into a loud, insolent jerk. I can’t help it. Totally out of my control.

Now if you have similar feelings about chowder, please sit down before I tell you what a Long Island clam chowder is exactly. Take some deep breaths. Make sure there are no sharp objects around.

Are the veins in your forehead are starting to throb? Jaw getting a little tight? Fists clenching?

I know what you’re thinking…

It’s like someone who likes the Yankees AND the Red Sox. Ever meet one of those weirdos? It takes every bit of self-restraint to not scream in that person’s face, “WHAT IS WRONG WITH YOU?!”

Admittedly, when I first heard about a Long Island clam chowder, my reaction was kinda like…

And I grew up on Long Island.

A Trend or Gimmick?

So I took it as a challenge to do what many would consider the unthinkable.

Combine tomatoes and cream into a chowder.

In so doing I’d answer the question for myself if it really has the potential to catch on. Because on the surface it’s not that crazy of an idea when you really think about it. Cream of tomato soup and penne alla vodka are just two examples of popular dishes that combine tomatoes and cream.

So why not in chowder?

I know this will be hard for many to believe but…

It is damn delicious.

I don’t know if Long Island clam chowder will catch on or not. As of now, I could only find two places on Long Island that serve it. I wouldn’t exactly call that a trend.

But it’s definitely not a gimmick. In fact, in my research on chowders, I found a recipe in a late 19th-century cookbook for a Connecticut Clam Chowder that used tomatoes. Obviously, that never caught on but perhaps at one point, it may have been more common than we think.

Making a Long Island clam chowder is not difficult. It’s really as simple as making a Manhattan chowder base (though I keep the veggies to a minimum) and just finishing it off with cream. The full printable recipe is below but there are three essential tips I want to share that will help you make a really great version from the get-go.

If you live on the east coast, most local fishmongers will carry hard shell clams. The seafood department of many supermarkets also have them. Get cherrystone or quahogs, the two largest varieties of hard shells. Canned clams just don’t have the same rich flavor and tender juiciness. Better still is the clam liquor (also called clam juice) inside those clam shells. When steamed in a little water, the clams will open and the juice will infuse the water and make a beautiful briny broth with a fresh, clean crisp taste of the sea. This is the true essence of any type of clam chowder.

I know canned clams and bottled clam juice is more convenient. But there’s just no comparing the flavor of the real thing. If you really want to use canned clams, you’ll need about six or seven six and a half ounce cans for the recipe below. You’ll probably get just enough juice in those cans for the broth but you might need to purchase a bottle or two of clam juice.

A little tomato paste will add an extra depth of flavor and richness.

Soon I will write a post about the different milk and cream options for chowder. I’ve seen every type used in chowder recipes – low-fat milk, store-bought whole milk, grass-fed raw milk, canned evaporated milk, half and half and heavy cream. And I’ve tried all of them, except low-fat milk, which is sacrilegious to chowder. For now, trust me when I say that heavy cream is the best choice for flavor and texture. Choose a good quality grass-fed product, if possible.

I’d love to hear your opinion in the comments below. Have you ever tried a Long Island clam chowder? Would you even try it? Do you think I’m a heathenistic putz for even suggesting it? Have at it you crazy chowderheads! Better yet, make the recipe first, and then let me know what you think. 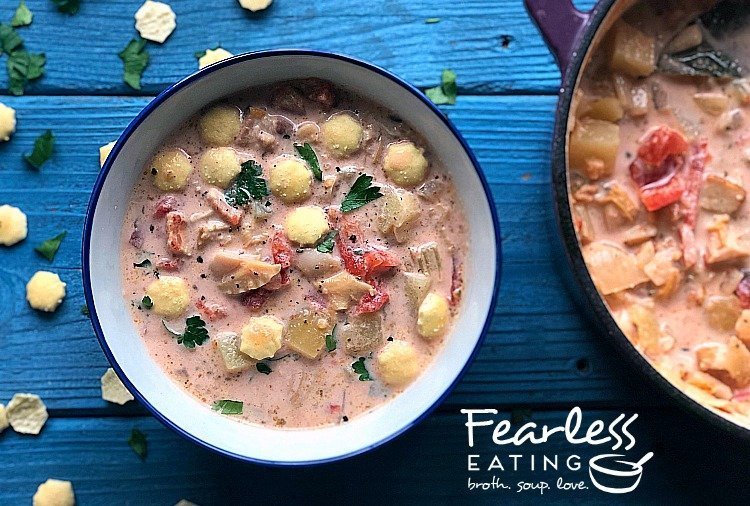 Long Island Clam Chowder is a blend between Manhattan and New England clam chowders. It’s pink in color due to the presence of both tomatoes and cream. Though it sounds strange, the melding of the two styles creates a unique type of chowder with its own flavor profile. 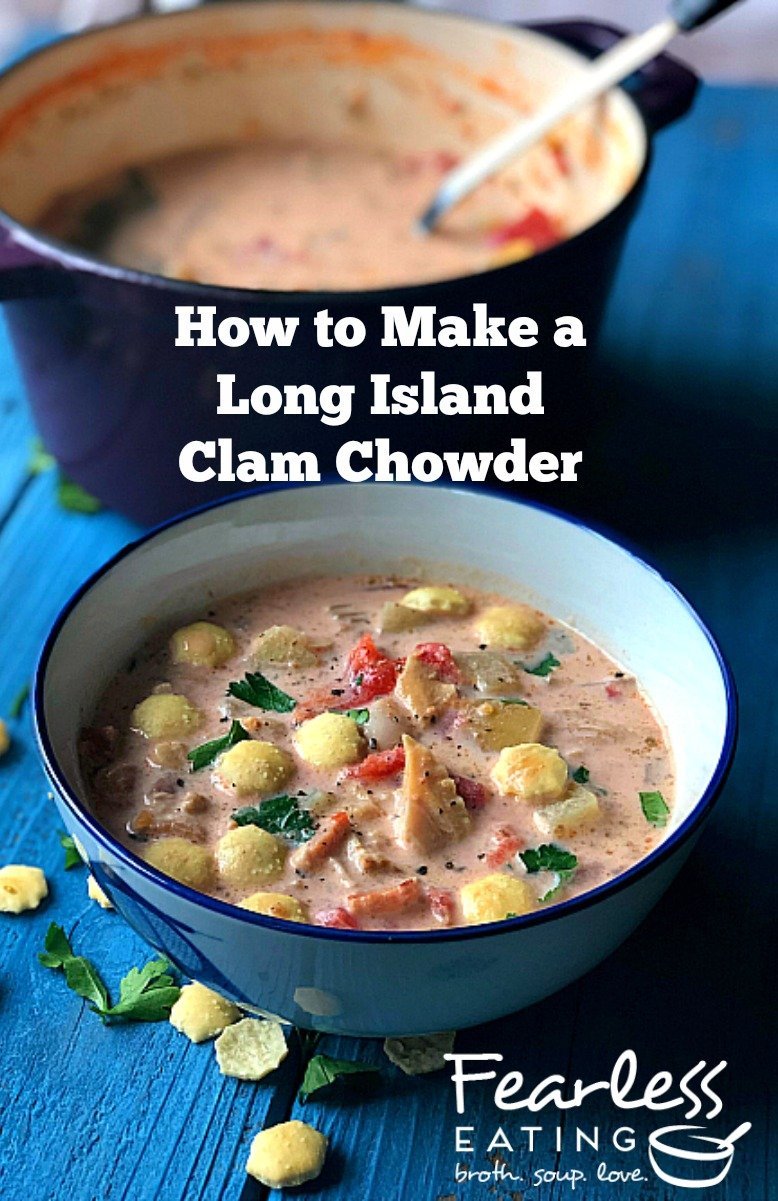