The great thing about making an oyster stew is that it is ridiculously simple. If you’re a total oyster stew-making newbie there are a few basic things to know before you get started.

What is an Oyster Stew?

First, I’m not sure why it’s called a stew but it’s really more of a brothy soup. It’s milk-based and there are only a handful of ingredients and steps. Something in the onion family (onions, shallots, or chives) is first sauteed in butter over low heat to medium heat. Then oysters are added. Then milk (or cream). And then a few simple seasonings such as freshly ground black pepper, parsley, cayenne, celery salt, or paprika. That’s it! Some recipes also use Worcestershire sauce and/or hot sauce. And of course, oyster crackers are often added too.

What is the Difference Between Oyster Stew and Oyster Chowder?

Oyster chowder is actually more like a stew and often includes onions, potatoes, and salt pork or bacon. It’s much heartier than oyster stew but still delicious in its own way!

Why is Oyster Stew Served on Christmas Eve?

In many places around the country, especially the midwest and south, oyster stew has been a traditional Christmas Eve dish for well over a hundred years now.

It is thought that Irish immigrants, following their Catholic customs to avoid meat during certain religious holidays, adapted a traditional Irish stew recipe using ling (a fish not commonly found in east coast US waters) with oysters. Ling has a similar texture and briny flavor to oyster stew. The dish became customary to consume on Christmas Eve in many Irish-American communities and caught on as a tasty, simple oyster dish around the country.

Why Are Fresh Oysters So Expensive Today?

It’s hard to imagine it today, but in the 19th and early part of the 20th century, it was not unusual to eat a meal of just oysters (good lord I’d give anything to experience that). Sadly, following World War II many of our once-prolific native oyster reefs were wiped out through pollution and over-harvesting. By the 1970s oyster production in the US had fallen to a mere one percent of its peak years in the early 20th century.

Today, in many places around the United States oysters are slowly making a comeback. Many native oyster beds are slowly recovering. Most of what we consume today is coming from well-managed aquaculture farms with a limited supply. Thus, the high cost.

But you only need three to four oysters to make an intensely flavored bowl of oysters stew. And if you buy them directly from a good seafood monger you can get them for a much cheaper price than in fancy restaurants. A good online source here in New England is The Local Catch. Another positive is that as oysters slowly return to our plates, many recipes that have gone out of fashion are being rediscovered, like traditional oyster stew!

The simple oyster stew recipe below is also featured in my new soup cookbook, New England Soups from the Sea, along with 79 other seafood soup recipes. Many are similar to oyster stew in that they are traditional recipes that have faded away but are ripe for rediscovery! If you love oysters you’ll also find oyster soup recipes for:

1. Make sure you know how to shuck oysters.

You need to shuck them yourself because you need not just the oysters but the ultra-briny liquor (sorry, not that type of liquor), the liquid inside the shell, which is the key that makes oyster stew so delicious. As opposed to some shellfish, like clams, you don’t get a lot of liquid from oysters, but what you do get is a powerful punch of oystery deliciousness. It’s like a super-concentrated dose of oyster flavor, kind of like a pseudo-bouillon cube, only real.

And if you’ve never shucked oysters before, this could easily happen…

That is a picture of my bloody hand. Doh!  Like a total idiot, I didn’t use a towel to protect against the oyster knife slipping, which of course, it did. Luckily, it was only a minor gash.

Of course, you might also ask if you can use canned oysters or jarred oysters. Yes, they’re certainly convenient and can be purchased at your local grocery store. But understand that they’re not quite as tasty as fresh shucked oysters. Remember it’s not just the oyster meats that make a good oyster stew, it’s also the oyster liquor, the juice inside the oyster shells. There’s nothing quite like those juices, fresh from the shell. It’s why fresh oysters on the half shell are considered so delicious by oyster connoisseurs!

2. Make sure you know what it looks like when oysters start to curl and ruffle.

So after you shuck them, you’ll saute the oysters in some butter with some chives or onions, as pictured here…

You’ll do this for a few minutes until the edges of the oysters start to curl and ruffle. If you’ve never sauteed oysters before, it may not be completely obvious when this starts to happen. So here’s a little visual…

As soon as those edges start to curl, add your oyster liquor and milk or cream. You don’t want to overcook the oysters! They’re supposed to be soft, meaty, and juicy.

In the 1967 gem of a little “book” (more like an in-depth pamphlet), Clam Shack Cookery, a collection of old Cape Cod recipes, fisherman Captain Phil Schwind says this about milk…

For the benefit of those who can’t remember back before milk came in cardboard or plastic containers, all pasteurized, homogenized and preserved, there was a time when milk came in round, glass ‘milk bottles’, and if allowed to set, the cream would rise to the top of the bottle. This ‘top’ milk, nearly cream, was what my grandma was referring to when she spoke of ‘whole’ milk. The rest, the skim milk she used to feed our cat, Old Tiger.

He’s referring to raw milk here and throughout the book asks the reader to use “rich milk” in many of the recipes. If you can’t find rich, raw milk, get the best quality WHOLE milk you can find, ideally from grass-fed sources. If you don’t have access to good quality whole milk, use half and half or even cream. The creaminess of half and half is a closer approximation to rich, raw milk than today’s overly processed, flavorless whole milk in supermarkets.

4. Don’t be afraid to add a dollop of butter to your bowl.

No fear of fats here on Fearless Eating!  Back before everyone became terrified of butter (and other healthy fats), many traditional oyster stew recipes recommend adding a dollop of butter.  Sounds a little weird to add butter to an already rich, milky stew, but it adds an extra depth of creamy richness that can be so very satisfying.

How to Make Oyster Stew 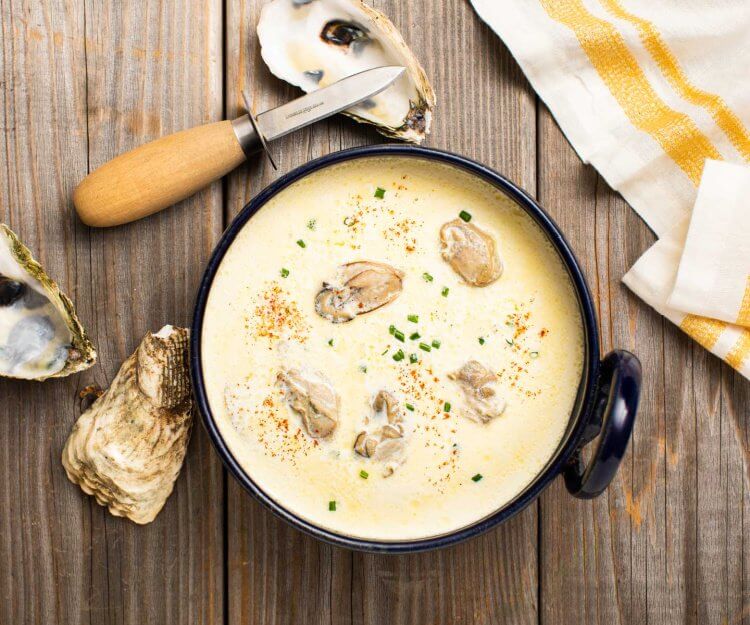 This simple traditional oyster stew highlights the delicious briny flavor of oyster liquor and milk or cream. Serve as an appetizer or a light meal. 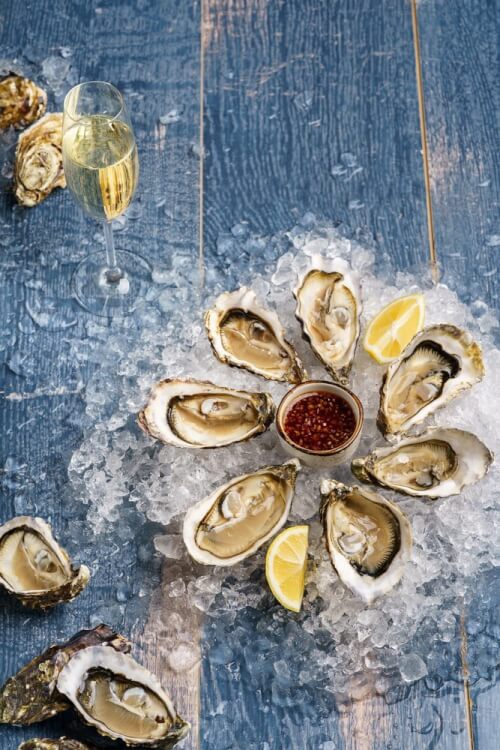