How to Make a Mussel Chowder with Fennel

Have you ever seen a mussel chowder on a restaurant menu? I sure haven’t. Chefs have to make things that sell so I’m guessing the overwhelming popularity of New England clam chowder keeps mussel chowder off menus. But a mussel chowder recipe is just as easy to make and just as flavorful!

In fact, I think mussels are better suited to chowder than clams. Man, I can hear the chowder police sirens ringing in the distance after saying that. Here in New England, it is BLASPHEMY to say anything negative about clam chowder.

But clams are often diced in chowder recipes and can easily get tough. Personally, I think tender, juicy, whole mussels are a more natural fit for a hearty chowder.

Furthermore, unlike clam chowder, mussel chowder hasn’t been standardized so you probably don’t have a pre-conceived expectation of exactly what it should taste like.

And that means you can try different ingredients and be creative.

How to Make a Mussel Chowder with Fennel

Fennel is a perfect complement to mussels! Its subtle anise flavor will add a dimension to mussel chowder that is unlike anything you’ll find in more typical clam chowders.

My mussel chowder recipe is pretty simple and straightforward. I wanted that anise flavor to really shine through so I didn’t add much else beyond the standard chowder ingredients. But you could certainly experiment and add additional herbs, white wine, or even other vegetables.

First things first, get yourself some mussels. I got five pounds of these beautiful Atlantic blue mussels…

Five pounds sounds like a lot but by the time you steam them and discard the shells, that will only leave you about 2-3 cups worth of mussel meat. That’s plenty though for the recipe below that will make at least 6 servings.

Next, rinse the mussels under cold water to remove any dirt or sand on the exterior of the shell. Discard any ones with broken shells or that are already open. Some may be just slightly open. Press them closed. If they stay closed, they’re fine. If they don’t, discard them. Remove any beards (the stringy thing sticking out of the side of the shell) by pinching them and pulling them down towards the hinge of the shell.

For clarity, here’s a mussel with a beard…

I wonder if female mussels find them sexy.

Next, it’s time to steam the mussels and make your mussel broth. Bring 2 cups of water to a boil in an 8 or 12-quart stockpot. Add the mussels, cover, and steam them for about 2-3 minutes. The shells should start opening, like so…

Open the lid and stir them around and then put the lid back on and steam for another 2 minutes until all the shells are open.

Mussels hold seawater inside their shells so when the shells open they’ll release that into your 2 cups of water and make a beautiful salty mussel broth. This is the exact same way a clam broth is made! They’re the simplest seafood broths to make and yet, the tastiest (at least in my opinion).

Next, strain the broth with a fine-mesh strainer (or layer a regular strainer with fine mesh cheesecloth). You’ll get about 1 quart of mussel broth. Set the broth aside. Remove the mussel meat from the shells and set them aside too.

Look at those beautiful whole mussels! Imagine a spoonful of those babies surrounded by a rich, creamy broth with chunks of potatoes and onions. At this point, you’re almost there.

If you’re not going to make your chowder right away, put both the mussels and the mussel broth (after it chills for about 30 minutes at room temperature) in the fridge.

The rest of the mussel chowder recipe is pretty straightforward and you can follow it (or print it) in the recipe card below. You can also find this recipe in my new cookbook, New England Soups from the Sea.

Now there are two things I want to highlight first because they’re not common ingredients in most American kitchens.

How to Prepare Fennel

The first is the fennel itself. I don’t know about you but when I was growing up my mother never once used it in any dish. Technically it’s an herb but the large white bulb is used more like a vegetable.

To prepare the fennel, chop off the stems where they meet the bulb. Save the stems for use in your broths. And save some of the feathery fronds which can be chopped and used as a garnish. Once you have just the bulb, core it like so…

Then just dice the bulb into small pieces, just like you’d chop an onion.

How to Use Salt Pork

The next somewhat uncommon ingredient is salt pork.

Most chowder recipes today use bacon instead of salt pork. Salt pork is fattier and saltier than bacon. It’s great to use in chowder for two reasons. First, the fat easily renders out, which makes for great cooking fat. Second, it’s not as strongly flavored like bacon. Sometimes bacon’s strong smoky flavor can compete with other ingredients.

Salt pork is not always readily available in supermarkets so if you can’t find it, using bacon is totally fine. But if you’re using bacon, try to find or use fattier pieces. Slab bacon, as opposed to bacon strips, would be a good choice.

Here’s what it looks like removed from the package. Notice those nice fatty streaks…

To prepare the salt pork, chop it into half-inch cubes. Next, heat a 6 to 8-quart stockpot over low heat and add the salt pork. Cook until the fat renders a few tablespoons. Turn the heat up to medium and brown the salt pork for a few more minutes. Be careful not to burn it! Once browned, remove the salt pork but leave the fat.

Reserve the browned salt pork for an optional addition to your soup.  They can be added just like bacon bits! This is HIGHLY RECOMMENDED. Once cooled, chop the cubes into smaller pieces, if necessary.

The rest of the recipe is simple and follows a standard chowder formula of adding the veggies and cooking until softened, adding the broth and potatoes and simmering until tender, and finally adding the cream and mussels. 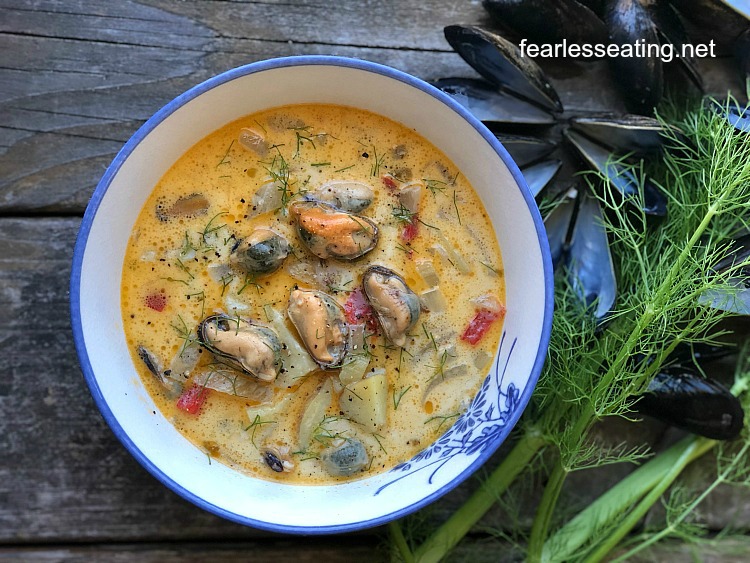 Mussel chowder follows a standard chowder-making formula. But the use of mussels, fennel and a mussel broth puts an interesting and delicious twist on more common chowder recipes.

Here’s a few tips and variations:

1. It’s always good to let your chowder rest at room temperature before serving to let the flavors meld together. This is known as “curing.” An hour or so will improve the flavor quite a bit. Refrigerating it for a day or longer will improve it even more!

2. Adding fresh herbs with the potatoes will give some nice additional flavors. Tarragon and thyme both would work well.

3. To make the diced pieces of salt pork even more divinely delicious, put them in an oven at 350 until they crisp up.