Who doesn’t love lobster? I don’t know anyone. If I did, I would immediately de-friend that person. Seriously, don’t trust anyone who doesn’t like lobster. Something is clearly wrong with them. Now, if by some chance you do know some lobster-hating weirdo, see if you can get them to try a lobster corn chowder.

If they object, just say it’s regular corn chowder. If they ask what those lobster-esque looking chunks of meat are, tell them it’s a type of exotic cauliflower or something. I don’t know. Make something up. Because it’s just not humanly possible to dislike lobster corn chowder.

That’s why it’s featured in my cookbook, New England Soups from the Sea, which also includes 17 other chowder recipes!

Tender chunks of juicy lobster, hearty chunks of onion and potato, bacon, and a briny lobster broth simmered with white wine, fennel, and herbs married with heavy cream all melding together is about the most divine lobstery thing you’ll ever taste.

For a few brief seconds, you might even consider disowning your children, divorcing your spouse, and moving to Maine to become a lobsterman (or lobsterwoman).

At the very least, all your worries will temporarily fade away and you will experience immense contentment and joy.

Here’s the recipe to prove it! 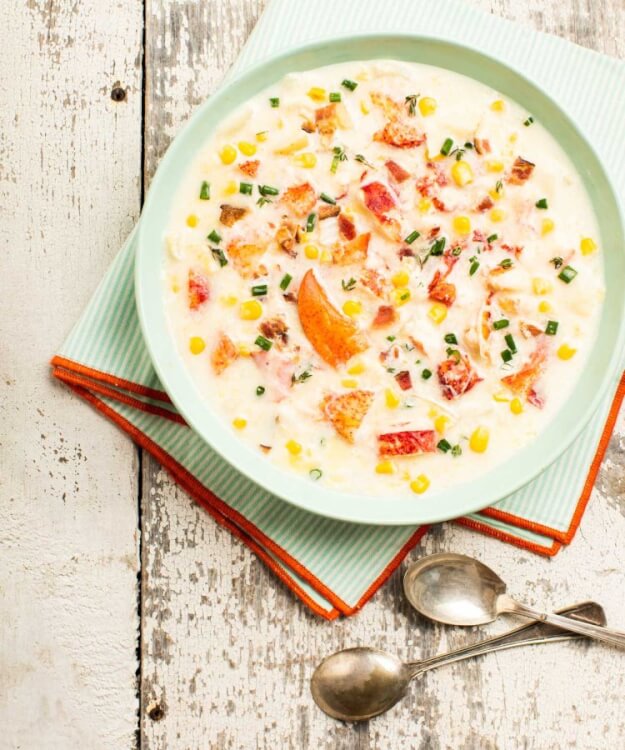 Tender chunks of juicy lobster, hearty chunks of corn, onion, potato and bacon in a lobster broth with herbs and cream make for a divine tasting lobster corn chowder.