If you really want to get someone’s blood boiling, argue for a Manhattan clam chowder. Many New Englanders detest the tomato-based version though it has its advocates on the southern coast of Connecticut and Rhode Island.

But the true measurement of an authentic New England clam chowder recipe isn’t about the style, but rather, the one thing that should unite all the different types of chowder in New England (even Manhattan clam chowder).

Aren’t they beautiful? Quahogs are the quintessential hard-shell clams of New England. They do two things in particular that elevate your run-of-the-mill restaurant clam chowder into an authentic one with flavors so pungent, so fresh, so evocative of the ocean, they could make a grown man cry.

Let me show you! Please note, below the video I’ve included a summary of the main points as well as a printable recipe. This recipe is also included in my new cookbook, New England Soups from the Sea, which is now available!

How to Make an Authentic New England Clam Chowder Recipe

The Case for Fresh, Whole Quahogs

Fresh whole quahogs harbor some serious soul-soothing flavors that cannot be duplicated from canned clams. While that may not be earth-shattering news, it’s not so much the clam meats themselves as it is the bold, briny juices inside the clamshells that define an authentic New England clam chowder recipe.

Step 1 to make any type of authentic New England clam chowder is steaming quahogs in water.

This will both cook the clam meats and release their juices into the water, thus creating clam broth. As opposed to other types of stocks or broths, nothing else is needed to enhance clam broth. No veggies, no herbs, no spices, or even salt as the juices are naturally salty. It is absolute perfection in its pure unadorned state, the ideal base in any clam chowder recipe.

In The Provincetown Seafood Cookbook, chef Howard Mitcham calls clam broth “the most delicious part of the quahog…it is nectar—ambrosia—fit for the Gods on Olympus.”

A homemade clam broth is what separates the legions of average-tasting chowders from truly divine tasting ones.

The Case Against Bottled Clam Juice

Now you might ask, “Why not use bottled clam juice?” Bottled clam juice is the same thing as clam broth. As an aside, why companies call it the unappetizing sounding “clam juice” as opposed to “clam broth” is a total mystery to me. You’d think you want to market your product in a way that’s appealing and, you know, not gross. Imagine boxed chicken being marketed as “chicken juice.”

Anyway, clam broths, as opposed to other types of seafood broths/stocks, can retain their flavors pretty well when bottled. However, most bottled clam juice products are not made from quahogs and in my opinion taste a tad too clammy. They lack the sharp but clean flavor of a homemade clam broth. That said, Bar Harbor brand clam juice is made from New England quahogs and is quite excellent.

But if you’re going to buy bottled clam juice for making a New England clam chowder that means you’re not going to use fresh quahogs. There would be no point in buying bottled clam juice when a natural byproduct of steaming fresh whole clams in water is clam broth. Rather, you’ll be using what the zillions of boring online clam chowder recipes use.

First, canned clams are sea clams. Sea clams are not quahogs and while they can also be quite delicious, they lose so much of their flavor when canned.

Second, canned sea clams come only from the large muscle of the sea clam. This muscle is then chopped or minced, perfect for mass consumption and canning. These tougher portions of clams turn even tougher when heated in chowder. I’ve had some clam chowders in restaurants where you could chew the clams like gum.

On the other hand, whole quahogs include the clam bellies, the most flavorful part of clam meats, which are more tender and which will add additional flavors to your chowder. You can chop these whole clam meats into larger chunks and even leave some whole!

Third, most chowder recipes that use canned clams also use the juices inside the cans to flavor the chowder. Those juices are not pure clam broth and not nearly as flavorful. In my opinion, they’re too clammy and lack the pungent fresh ocean flavor of a homemade clam broth.

I’d rather support smaller-scale companies, like those that raise quahogs via sustainable aquaculture practices. Quahogs are commonly farmed along our coasts, which as opposed to shrimp and fish farms, are excellent for our coastal environments. Farmed quahogs improve water quality and they don’t require antibiotics or artificial feeds.

Other Features of an Authentic New England Clam Chowder

While quahogs and their luscious broth are the most important feature of an authentic New England clam chowder, there are some other considerations too.

Best types of onions and potatoes

Let’s start with the onions and potatoes. White or yellow onions are a good choice for chowder. Avoid red onions which are too sweet. You want medium starch potatoes that hold their texture and shape when cooked in a hot liquid. White potatoes or Yukon gold potatoes are both excellent choices. Avoid Russet potatoes which are too starchy and will fall apart when cooked.

Many old-school New Englanders favor salt pork over bacon. They say that bacon’s smoky flavor is too strong. And while I do agree with that, it is hard to find good quality salt pork today. I’ve tried several store-bought brands and they don’t render enough fat.

Bacon is perfectly fine to use and you can control the smoky flavor. Seek out thick-cut bacon or slab bacon with noticeable strips of fat. You’ll render this fat over low heat which will be used to cook the onions. The bacon can then be removed, cooked separately, and diced into bacon bits. That way, you can avoid an overly bacon flavor to your chowder. But many people love that smoky flavor and choose to leave it in.

Another contentious point is the type of dairy to use. Some northern New Englanders prefer a milkier version with whole milk instead of cream. However, traditionally, old-school New Englanders used rich, raw milk. Today’s overly processed whole milk lacks the fat content and thus, flavor, of old-school milk. In that case, there’s an easy solution. Just use half and half. It’s a closer approximation to rich, raw whole milk than today’s supermarket whole milk. But personally, I recommend heavy cream.

For those of you that are “health-conscious” and are concerned about the fat content in half and half and heavy cream, I’d encourage you to read my previous post, “Is Clam Chowder Healthy?”

Please understand, as my video above explained, we’re not using a lot of heavy cream in an authentic chowder. That’s actually another big difference to so many restaurant-style chowders, especially those from chain restaurants. They’re too heavy on the dairy.

Remember, the essence of an authentic New England clam chowder recipe is the clam broth. That’s the flavor that should predominate, not milk or cream. In an authentic recipe, the ratio of clam broth to dairy is around 2:1 to 4:1. In my video recipe, you’ll see I only add 1 cup of heavy cream to the 4 cups of clam broth. That was perfect! It gave the chowder a nice richness without it being too rich and creamy.

Lastly, the method of thickening can vary widely. It’s important not to over-thicken your chowder, which can easily dull the flavor of the clam broth. For this reason, I prefer to thicken chowder with a slurry as opposed to a roux. In the video above you can fast forward to the 17:30 mark and see how easy it is to utilize a slurry.

Though New England clam chowder is the most popular chowder style, there are many other seafood chowder styles that include not just clams but fish and shellfish too.

Some people are shocked to hear that New England Soups from the Sea includes not one, not two, but eighteen different New England chowder recipes.

Of course, the recipe below for an authentic New England clam chowder is included. Other chowder recipes include the three regional styles mentioned at the top, as well as a Connecticut clam chowder, a Portuguese-style clam chowder, 6 types of fish chowder, and 6 types of shellfish chowders. If you love chowder I promise you won’t be disappointed!

But it also includes sixty-two other New England soup recipes including broths, stocks, bisques, stews, and boils. Each recipe includes authentic ingredients and time-honored methods of preparing and cooking. Needless to say, no recipes will include canned clams!

Last but not least, here is the printable recipe. Please share your thoughts and comments in the comment section.

This recipe for an authentic New England clam chowder uses whole quahogs steamed in water to create a pungent, luscious clam broth. It's easy to do and creates an unistakable ocean-fresh flavor! 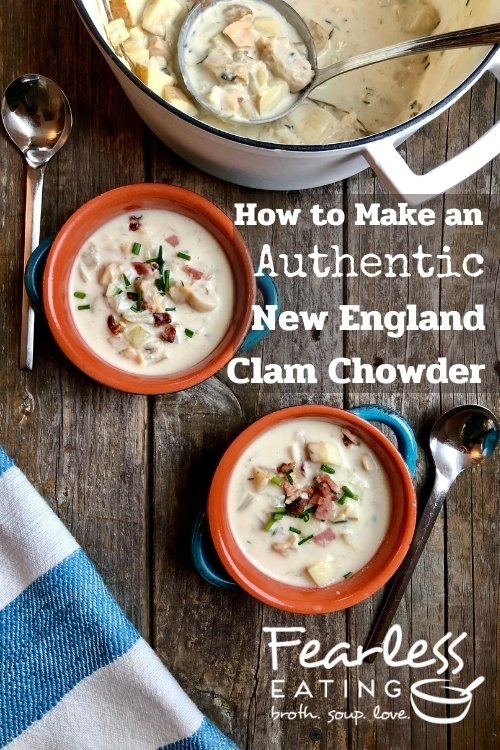