In case you were guessing, the little-known nutrient in seafood soups is NOT omega-3s. Everyone knows about the health benefits of omega-3s. I know it. You know it. Your mother knows it. My mother knows it. Every doctor, every health website and every major health organization has been telling us this for decades now. Heck an entire industry of fish oil supplements has developed because of it.

Nor is the little-known benefit of seafood soups their high mineral content. A lot gets written about iodine and selenium, both of which are essential to thyroid health. Recent research has even shown that selenium protects us against mercury in seafood.

I’m talking about something you really only get from seafood soups. Well, you could get it somewhere else but few people would directly consume it (more on that below). It’s something your doctor doesn’t tell you about and something your mother (and my mother) doesn’t lecture you about either. The little-known benefit is hinted at in an ancient South American proverb…

Fish broth will cure anything

Now of course it won’t cure anything. It’s just a proverb. But it is a testament to how well regarded fish broth is not just in South America but all over the world.

Fish Broth Around the World

For example, Thailand, where I’m currently traveling. Seafood soups, made from fish broth, are easily available everywhere such as tom yum goong. But seafood, especially fish, is also consumed in WHOLE form. The other night I had a whole barbecued fish that was just divine. And yes, I ate parts of the head. The cheeks and the meat around the jawbones, around the eyes and the tail were just dripping with juicy fat (and thus omega-3s) and flavor.

Both fish broth and fish head dishes are popular around the world. For example, fish head curry (made with fish broth) is popular throughout southeast Asia. Many European countries value fish heads as well. Now don’t worry I’m not going to tell you to start eating fish heads. I understand that most of us in America have not been raised to eat fish heads. But there is an important middle ground.

We can use them to make fish broth and in turn, seafood soups. You will get not just a high dose of omega-3s and minerals, you’ll also get…

That’s the little-known nutrient. There’s a lot of collagen in fish heads. A lot has been discussed about collagen in recent years. But it’s rarely mentioned outside of bone broths from land-based animals like chicken and beef.

Few people realize that fish broths are not just a great source of collagen but also a MUCH SIMPLER AND CHEAPER way to access and consume collagen. In case you’re not aware of the health benefits of collagen…

What Exactly is Collagen?

Collagen is what binds and glues us together. It’s the most abundant protein in the body because it makes up so many different parts of us. For example, it forms the strong but pliable connective tissues in things like skin, bones, tendons and cartilage. It’s also a building block for our hair, nails and the lining of our internal organs. As we age, collagen production slows down and we lose the natural fluidity of our youth. Wrinkles form, joints ache, our hair loses its natural sheen and so forth. Yay to aging! But we can slow that process down through good lifestyle choices such as a whole foods diet that includes collagen-rich sources. You may know that one of the best sources is bone broths.

The longer you simmer chicken and beef broths the more the proteins in collagen break down into their individual amino acids. This makes it easier for our body to digest and assimilate them. When collagen breaks down it forms gelatin. Gelatin is basically cooked collagen.

You can see evidence of this when a broth cools. It will thicken and form gelatin. The more gelatin a broth contains the more it will jiggle, just like Jell-o, after cooling. This is why collagen-rich parts of land animals, like feet, heads and backs are included beyond just bones when making a gelatin-rich broth.

It’s the individual amino acids in gelatin that have so many health benefits. Glycine, proline and glutamine, in particular, have potent anti-inflammatory properties (source). Gelatin also has hydrophilic properties (meaning it attracts water) and thus acts as a sort of lubricant that can help facilitate food through the digestive system. Perhaps this is why many doctors used it therapeutically with patients in the first half of the 20th century to treat an assortment of digestive problems, including IBS, inflammation, heartburn and dysbiosis (source)? And perhaps this is why for centuries, grandmothers have prescribed simple broth-based soups for things like the common cold and digestive issues?

I could easily carry on with additional health benefits and link to all sorts of scientific studies that detail those benefits. A great article that goes into a lot more detail is Why Broth is Beautiful, if you’re interested. My point is that we know gelatin has a myriad of health benefits but people are overlooking the cheapest and simplest way to consume it – from seafood soups made from fish broth.

I know that sounds a little crazy because so few people in America would even consider buying fish carcasses to make fish broth but hear me out here.

There was a time when almost NOBODY made homemade chicken and beef broths. It was called the 1970s, 1980s and 1990s. And then people started making them again thanks to the locavore movement which gained steam in the early 2000s. Bone broths became trendy again and their health benefits re-discovered.

So there’s a good chance you already make gelatin-rich broths from chicken and beef. But you know that in order to create a nutrient-dense gelatin-rich broth, you need to simmer your broth for a long time. It can take upwards of twelve and sometimes even twenty-four hours, especially with larger bones from beef.

I know this is where some of you Instant Pot fanatics claim that you can make a gelatin-rich broth in a fraction of the time. Maybe so. But I’ve tried it and I don’t recommend the Instant Pot or other pressure cookers for making bone broths. But even if it did, it wouldn’t matter anyway because making a fish broth in the Instant Pot won’t save you any time compared to making it on the stovetop! A gelatin-rich fish broth only takes an hour to make. Why?

But in fish, the collagen easily breaks apart and dissolves when exposed to heat. It takes a fraction of the time. Marine collagen also has a smaller particle size and lower molecular weight compared to the collagen from land animals which means it’s the most easily digested and absorbed of the different types of collagen.

Furthermore, collagen pills and powders are not cheap. Bones from chicken and beef are not as cheap as they used to be. But bones from fish? DIRT CHEAP. So cheap in fact, that you can often get them FOR FREE.

Some US fisheries actually ship fish heads to countries where there’s a bigger market for them. But most simply discard the carcasses overboard. It’s estimated that for every pound of a boneless fillet, two to three pounds of scraps are discarded. This isn’t just wasteful, it’s also insane because there’s so much valuable nutrition in them.

Where to Find Fish Carcasses

Simple. From your local fishmonger. Or the seafood counter at your local supermarket. Or if you live near the coast and know a commercial fisherman, even better. Just ask for them. Some will give them to you for free. Some might charge around a dollar a pound.

Everyone complains about the cost of real food but here’s an example of something that is so cheap and so nutrient-dense it’s almost hard to believe.

Study the Benefits in Yourself

You still might be thinking… Dude, come on, fish carcasses?! Are you serious?! I hear ya. I’m not saying it’s for everyone. Yes, they can gross people out. Most people scoff at the idea of making fish broth at home. But not everyone. There are people who do love seafood, who are curious, who are open to learning. If that’s you and you’ve never made a fish broth before, just give it a try.

Make it one time and study the benefits in yourself. The historical and widespread use of fish broth around the planet is a good indication of its health benefits. So is the tons of anecdotal evidence, which includes me, from people who report immediate and noticeable health benefits when consuming fish broth and seafood soups made from fish broth.

Common reactions include a feeling of nourishment, ease, and digestive wellness. I know how good fish broth and fish broth-based soups make me feel and I don’t need to wait around for evidence-based studies to prove it. Our ancestors could not identify omega-3s, minerals, or amino acids but they had the passed down wisdom of knowing how to prepare foods in nutrient-dense ways. Fish broth and seafood soups were certainly an essential part of that.

How to Make Fish Broth

It’s even simpler than making chicken broth. But the process is almost identical. I have a recipe and video here. The key thing to remember is to use fish carcasses with the heads. Again, it’s the collagen-rich heads that will create a gelatin-rich broth.

So what do you do with fish broth once you make it? Make simple seafood soups! There is an infinite amount. A short survey of traditional seafood soups from around the world would prove it. I am currently working on a book about New England seafood soups. Contrary to popular belief, there’s a lot more to that than clam chowder and lobster bisque (though you wouldn’t know it from going to restaurants), and that includes brothy soups made from a variety of different types of seafood stocks and broths.

In the meantime, here are 15 seafood soup recipes from my blog that use fish broth: 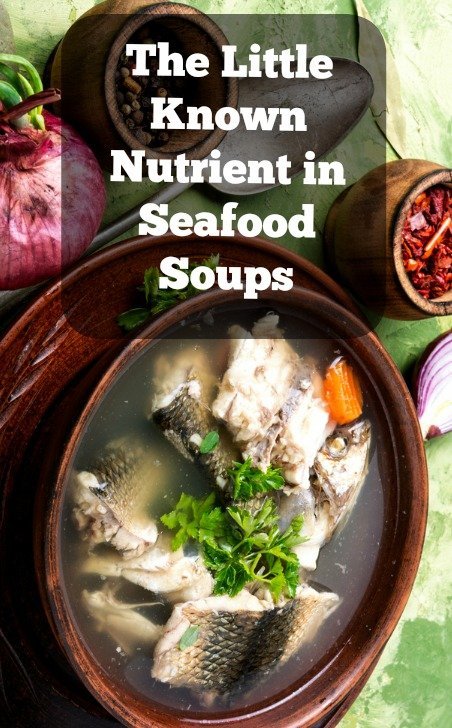