In many ways, my love of broth and soup started with Mohinga back in 2007. Although I didn’t know it at the time, it would inspire me to write my broth and soup cookbook, Fearless Broths and Soups. So before I show you how to make Mohinga, let me share an excerpt from my book in which I explain why I consider Mohinga the greatest noodle soup EVER. I hope it inspires you to make the simple Mohinga recipe that follows!

Back in 2007, I traveled to Burma (also called Myanmar) for two months. Now Burma might not seem like the most popular destination on the globe but the primary purpose of my trip was to deepen a Buddhist meditation practice I’d learned several years earlier. Burma is a deeply Buddhist country and though not well-traveled by many westerners, offers many opportunities for the study and practice of meditation.

But meditation wasn’t the only purpose of my trip. To be honest, I’m not the noblest of meditation practitioners. Too much meditation and I go a little stir crazy. Being in a foreign place, naturally, I wanted to experience the country outside the confines of meditation centers.

Little did I know that the secondary intention of my trip, to travel and see the country, would lead to a serious addiction.

The first time I tried it in Yangon, I knew I was hooked. From that point forward, I could not start my day without it and I would do whatever it took to find the best sources.

On a few occasions, that meant wandering down a dark alley where few foreign travelers ever set foot and no English was spoken. The locals always knew why I’d come. Knowing head nods and sly smiles were the only form of communication needed.

But more commonly, to get my daily fix, it simply meant stepping right outside my hotel and getting it on the street.

Be it the cities of Yangon or Mandalay, small towns and villages, the sacred temples of Bagan or even inside the meditation centers themselves, the source of my addiction was everywhere.

Mohinga is the national dish of Burma, a traditional Burmese soup with such exquisite flavors, that it’s as if all the quintessential flavors of Southeast Asia come together in perfect balance and harmony. Though technically not a drug, in the Buddhist sense, where everything within the net of our senses can cause intense craving and desire, it’s pretty damn close.

Mohinga starts with a fish broth. That may not sound very exciting but it’s what’s added to that broth that makes it so divinely delicious. Lemongrass, banana stem, ginger, garlic, and onions slowly simmer away and infuse the broth with both an herbal, lemony sweetness and a pungent earthiness. Fish sauce gives the broth a subtle-but-not-too-subtle fish essence and fresh local fish gives it all a hearty boost.

But that’s only the beginning.

All of that sweet, sour, salty deliciousness is then ladled over rice noodles and then served with sides of fresh lime, dried red chilies, cilantro, thinly sliced red onions, and more fish sauce. You add as much or as little as you want depending on your personal tastes.

Hard boiled eggs, crispy fried onions, a crispy fish cake, and other herbs and spices are often part of the broth and accompaniments as well. Different areas of the country have different interpretations and ingredients. Yangon (formerly called Rangoon) Mohinga is slightly different that Mandalay Mohinga and so forth.

And in Burma, they primarily have it for breakfast. I would wake up with such a craving for it that I could barely function until I had my fill. It is hands down the best noodle soup I’ve ever had and if I ever go back to Burma, my primary purpose will be for Mohinga.

Oh how I wish when I was there in 2007 that I’d had a cellphone. My God the videos I would have taken! So I’ll leave it to the well-known travel food blogger, Mark Wiens, to show you what it’s like to eat this amazing Burmese breakfast in its country of origin.

Yes, eating Mohinga on the street is an experience. It’s frenetic, it’s loud, and the seating can be a little cramped!

I will say that Mark’s bowl of Mohinga looks a little different than the ones I had. But again, every Mohinga recipe is different. That’s the beauty of traveling for real food.

Let me also clarify two things in the video. First, Mark refers to the crispy cake-like thing as a “donut.” It’s definitely NOT a donut. It’s probably some form of rice or fish cake, a common Mohinga ingredient. When it gets saturated with broth, it will lose its crispiness and can take on the consistency of a donut.

Second, towards the end, he says that “there’s something starchy in there” when referring to the consistency of the broth. He guesses that it’s potato starch. It’s more likely toasted rice flour or garbanzo bean flour.

How to Make It

I hope my little addiction story inspires you to try my Mohinga recipe. Now truth be told, I originally had no intention of including a Mohinga recipe in my cookbook. And that’s because I’d never made it. For years, it intimidated me. I knew there was NO WAY I could duplicate the real thing. For starters, I didn’t have many of the local ingredients native to Burmese cuisine. For example, you’ll never find banana stem in western markets. And I knew I could never make the crispy fish cake correctly. So I thought for sure I’d be disappointed.

But I decided to experiment with a simplified version. This Mohinga recipe may not be “authentic” but overall, I actually thought it was pretty close to what I experienced in Burma. To be honest, I was thrilled with the results. Here’s how to do it…

Many health food stores, like Whole Foods, now regularly carry lemongrass stalks. It’s really not hard to find anymore. The top piece is a whole stalk. It’s about one and a half feet long. Cut it in half so you have the middle piece. Trim off the end and then remove a few of the rough outer layers. Dice it into pieces as shown on the lower piece.

Saute everything over medium heat for about 5 minutes or until the veggies are fragrant and softened.

Mix it into the veggies and saute for another minute or two.

It should take on a nice deep golden yellow color from the turmeric. Bring the Mohinga to a boil and reduce the heat to a gentle simmer.

Garbanzo bean flour (also called chickpea flour) looks somewhat similar to almond flour. It has a bit of a grainy texture. Simply add it to the Mohinga and stir it in. It may clump a bit. Stir it well and press some of the clumps against the side of the stockpot until it’s dissolved. You can scoop out some of the broth into a small mixing bowl, mix and dissolve the flour, and then stir it back into the main pot.

Simmer for about 10 minutes, stirring frequently until it thickens slightly. While the Mohinga is simmering, prepare the rice noodles according to the package directions. Regular rice noodles or rice vermicelli noodles are both fine.

Catfish is the most common species of fish used in Burma. You can use that but I think it’s best to use a whitefish closest to where you live. I live in New England so I’m using hake. Any fresh or saltwater whitefish species will work fine.

Cut the fish into 1 to 2-inch pieces. Add it to the broth and simmer for about five minutes or until the fish is cooked through.

Add rice noodles to individual bowls. Ladle the Mohinga over the noodles. Add any of the optional seasonings, to taste. I highly recommend adding fish sauce, a squeeze of lime, onions, cilantro, and a hardboiled egg.

Step 8. Taste and drift off into brothy bliss! 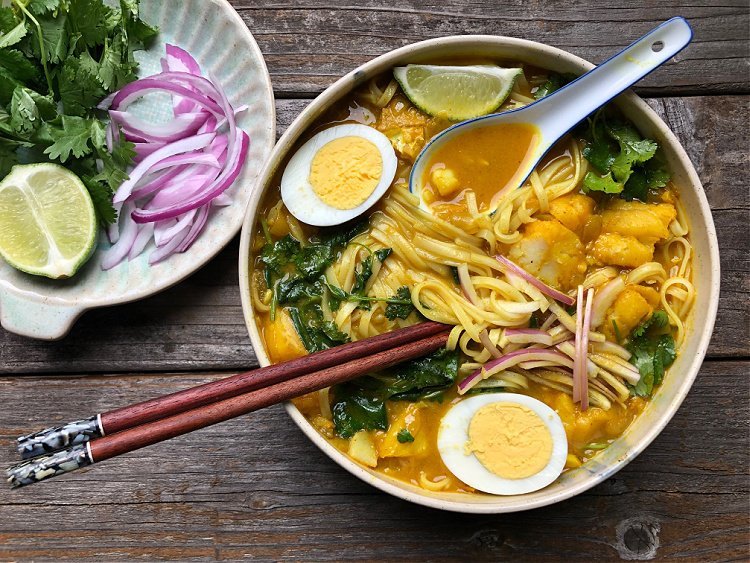 Burma’s most popular noodle soup, mohinga is a fragrant blend of southeast Asian herbs and spices all swimming in an earthy rich broth. 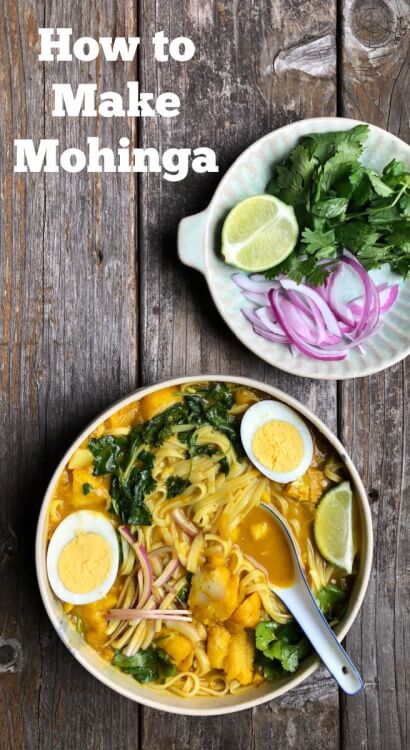