For decades we’ve been told mercury in seafood is a concern. On the surface, it sure makes sense. Though mercury occurs naturally in the environment, industrial sources like coal burning power plants increases mercury in the atmosphere which settles in our waterways and gets consumed by fish. Larger fish eat smaller fish and so it can bio-accumulate up the food chain which is why fish like tuna and swordfish have been shown to have the highest levels of mercury.

The Vital Importance of Seafood in Children

In 2019 the journal PLEFA did a review of 44 studies involving over 100,000 mother-child pairs and over 25,000 children under age 18 who ate seafood. The New York Times article, Why Children (and Pregnant Women) May Want to Eat More Fish summarized the review by saying “the studies variously found that seafood eaters had lower risk of attention deficit hyperactivity disorder, better school grades, and higher I.Q. by as much as 9.5 points compared with their peers who ate no fish.”

It’s widely known that the omega-3 essential fatty acids found in seafood, eicosapentaenoic acid (EPA) and docosahexaenoic acid (DHA) are vital to proper growth and development in children. Omega-3s are called “essential” because the human body cannot manufacture them on its own. You HAVE to get them from dietary sources. And EPA and DHA are found almost exclusively in seafood. In particular, DHA is highly concentrated in our brain tissue and accumulates quickly in the brains of children during pregnancy and infancy.

Interestingly, in the PLEFA study, no adverse effects were found on either the mothers or their children, including those who consumed seafood with higher levels of mercury. The beneficial effects were still observed.

Since the 1960s, studies on other mammals, birds and fish have shown similar results. Despite exposure to mercury, no negative effects of that exposure were seen. (source)

Recent research suggests why this may be.

It turns out that selenium has highly protective effects against mercury in seafood. Studies have shown that selenium binds to mercury which prevents it from binding to other things, like our brain tissue. (source, source, source) And that the higher the levels of selenium in seafood, the smaller the risk from mercury. And guess what? Pretty much all fish from our oceans are high in selenium. Check out this chart on page 3 which compares the selenium and mercury levels of common ocean fish.

It’s now understood that measuring ONLY mercury levels in seafood is not a good indicator for potential risk.

A newer way to assess the risk of mercury in seafood is through something called the Selenium-Health Benefit Value, or Se-HBV, a measure of the ratio of selenium to mercury. The higher the ratio of selenium to mercury, the lesser the risk of mercury. Very few seafoods have Se-HBV values with higher ratios of mercury to selenium. A few that are a concern include swordfish, a few types of sharks and pilot whales. Personally, I don’t know too many people who eat the latter two.

Check out this Se-HBV graphic which was put together by Dr. Sarah Ballantyne of The Paleo Mom.

This is not to say that pregnant women may still want to exercise some caution, especially with swordfish. However, because omega-3s are so crucial to the growth and development of children and in light of these new findings on the protective role of selenium, many practitioners are advising pregnant mothers to consume omega-3 rich ocean fish regularly. Dr. Sarah Ballantyne is one of them. She recommends NO LIMITS on fish consumption during pregnancy.

Please understand that I’m NOT saying we shouldn’t be concerned about the health of our oceans be it from industrial compounds, plastics, overfishing and warming seas. But when it comes to eating seafood, I think the benefits far outweigh the risks. And I think too often we fail to see the biggest risk of all…

So many of us are beating each other up over the pros and cons of a plant-based diet vs. an omnivore diet but the biggest enemy is right in front of us every day: The Standard American Diet (SAD).

I can’t tell you the amount of people I know who won’t eat seafood because of mercury concerns but don’t bat an eye at drinking Diet Coke. Or eating at McDonald’s. Or eating any of the industrially produced foods in supermarkets like factory-farmed meats, farmed shrimp, genetically modified foods, fake processed foods full of preservatives, artificial flavors and colors, refined sugar and poor quality industrial oils. I’d be much more concerned about all the chemicals in those things than trace amounts of mercury in seafood.

But if you are still concerned, here’s some more food for thought:

Seafood is such a rich source of omega-3s that even non-fatty fish, typically low in mercury, are still decent sources of DHA and EPA. Many types of shellfish, like oysters and mussels, are also excellent sources. You can find a list of the omega-3 content in common types of seafood here. But I’d rather give you a more practical piece of advice:

In other words, eat a diversity of seafood products. You’ll get plenty of omega-3s (and other nutrients) when you do that. And it’s unlikely you’ll have to worry about mercury in seafood or even purchasing pricey fish oil supplements. It’s a lot more tasty too.

Eating like a fish means you’re more likely to support local American seafood, which is subject to strict environmental regulations. The majority of Americans eat only a handful of species, such as shrimp, much of which is imported and which contributes to environmental problems. There’s many other benefits to diversifying your seafood choices! Click here to learn more about how and why to eat like a fish. 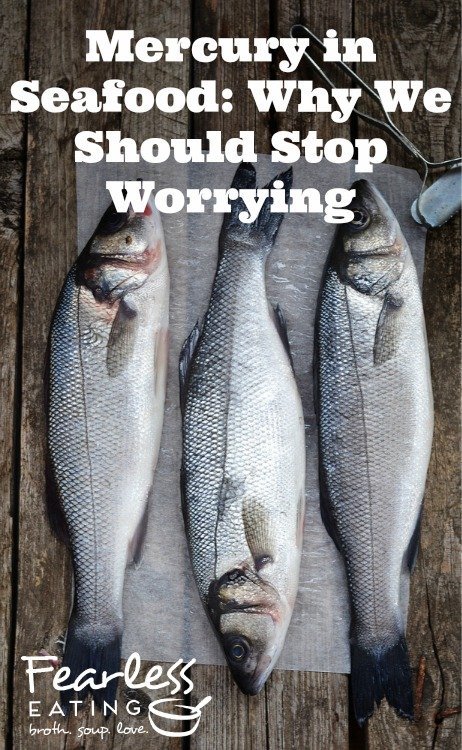