Take any coastal region of the world. If you dig deep enough, you’ll find dozens if not hundreds of native seafood soup recipes in that region. Most of these you won’t ever find on the internet. In fact, the overwhelming majority of seafood soups remain relatively obscure.

Take New England, for example, a region known for its rich seafaring heritage and seafood cuisine. In my cookbook, New England Soups from the Sea, I include 80 seafood soup recipes from around New England. Yes, 80! Most people are surprised when they hear that. After all, very few restaurants venture beyond New England clam chowder and lobster bisque.

Before the food industry eroded our coastal culinary traditions and simplified our tastes in seafood, there was a time when Americans consumed the bounty of the sea in many forms, including seafood soups, and were comfortable making a wide variety of seafood soup recipes. I’m sure this is true in other areas of the world too.

Old cookbooks are a testament to the diversity that once existed. Chowders used to include dozens of different species, not just clams. Bisques were commonly made with more than just lobster. Fish soups included a greater diversity than just cod and haddock. And seafood stews, native to every seafaring culture on the planet, showcase varieties that are as vast as the ocean itself.

The 100 seafood soup recipes included here may seem like a lot but it barely scratches the surface. Regardless, there’s a lot more to seafood soups than just clam chowder and lobster bisque. Hopefully, you’ll find something new and try something different!

For example, fish stock gives fish soup recipes, be it fish chowders, stews, or even brothy fish soups, an added but delicate boost in the briny and salty qualities of the sea. It’s a much better choice than water or chicken stock in any fish soup recipe.

Most of the 100 seafood soup recipes are made with homemade stocks and broths. But not all include directions for how to make them. The recipes in this section will go into more depth and serve as a reference for making your own.

Perhaps the most widely consumed seafood soup, at least in America, New England clam chowder reigns supreme in this category of seafood soups.

Contrary to popular belief, its position as the King of Chowders is only a fairly recent historical development. There are many types of clam chowder in New England, as well as other regional styles around the United States. These classic seafood soup recipes take many forms and can include almost any type of fish or shellfish.

When it comes to bisques, it’s rare to find anything other than a lobster bisque on restaurant menus. But other types of seafood bisques can, and should, be made too.

The key to any great bisque is the stock. Crustaceans, especially lobsters and crabs, make incredible stocks. The one advantage of making bisque from seafood other than lobster and crab, is they tend to be less time-consuming. Mussel and clam bisques only require their respective broths, which are easily made via five to ten minutes of steaming.

27. Corn and Blue Crab Bisque by Grits and Pinecones

29. Crawfish Bisque by Went Here 8 This

Every seafaring culture has its native seafood stews. Bouillabaisse, cioppino, gumbo, paella, and countless others combine multiple types of fish and shellfish with their ultra-flavorful juices from their shells, mixing, melding, and morphing into some truly wondrous symphonies of the sea.

The difference between a soup and a stew is really just the amount of liquid. Soups are brothier and stews are thicker, the latter coming from a higher ratio of meat and vegetables to broth and/or an extended simmering to reduce the broth to a thicker consistency.

But there are plenty of gray areas. Many types of seafood soup recipes have a stew-like character more from the multifarious types of seafood than from a thickened base. For example, bouillabaisse is often more soup-like than stew-like. Same for the simple milk-based New England shellfish stews, like oyster stew, And some soups like chowder are more like stews. Thick or think, in the end, the only thing that really matters is if it tastes good. And with stews and medleys, you can never go wrong. I consider them the Mt. Everest of all seafood dishes and truly some of the greatest dishes on the planet.

42. Seafood Paella by Spain on a Fork

47. Shrimp and Crab Gumbo by Burrata and Bubbles

50. Shrimp Etouffee (Cajun Shrimp Stew) by Dinner at the Zoo

More Seafood Soup Recipes from Around the World

There are so many seafood soup recipes from around the world that it would be impossible to include them all. Any country with a significant coastline surely has a long tradition of soups with seafood. What follows are some of the more well-known recipes. If you have some favorite seafood soup recipes not included here, please share in the comments below!

Also, I’ve attempted to select recipes without overly exotic or impossible-to-find ingredients. You may have to substitute an ingredient here and there but the recipes could at least be closely approximated in most kitchens.

67. Traditional Miso Soup with Dashi Stock by Just One Cookbook

70. Jamaican Rundown (Jamaican Fish Stew) by Recipes from a Pantry

TAKE A LOOK INSIDE!
Fearless Eating may receive commissions from purchases made through links in this article. As an Amazon Associate I earn from qualifying purchases. More info here. 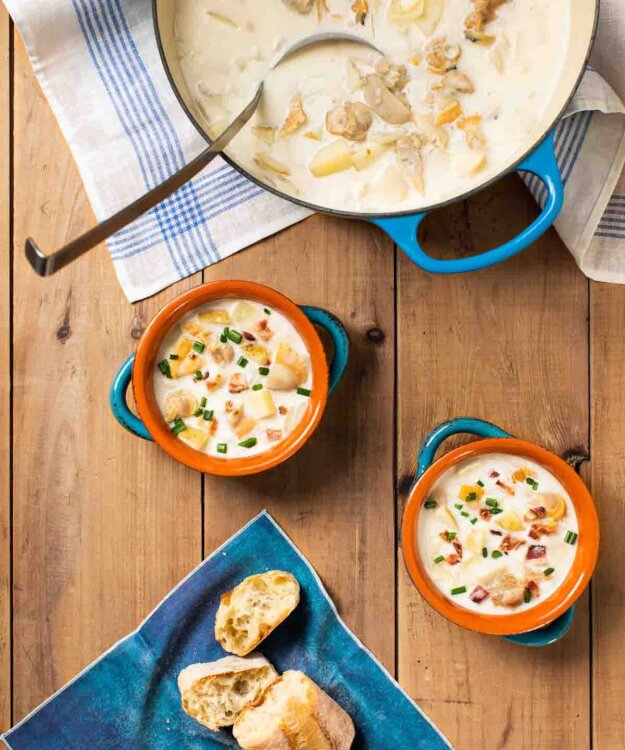