There are times when the beauty in this life stops you dead in your tracks. A misty mountain vista with shades of blue and purple, a fiery orange sunset that lights up the sky, an uplifting piece of music. The same could be said of a New England bouillabaisse. When it’s done right, it’s like time stops and for a brief moment all is right with the world.

The Many Rules of Bouillabaisse

Bouillabaisse is one of those dishes that has more rules than a football game. Every time I make it I think some fancy French is going to appear in my kitchen and start throwing yellow flags.

I hate rules when it comes to cooking.

But keep in mind that the true spirit of bouillabaisse is a humble fisherman’s stew, made with the so-called “trash” fish that were too bony or unusual to be sold at markets.

Eventually the fancy French chefs got their hands on it and made it into something highly refined (and pretty damn expensive too) with very specific steps for preparing, cooking and serving it. So called “authentic” recipes call for at a minimum, four different types of fish and typically shellfish too.

But these rules, for the most part, are rarely followed to the degree the purists claim are necessary. As bouillabaisse spread from its origins in Marseilles to seafood-rich places all around the world, cooks adapted it with their local ingredients and adhered to some guiding principles that thread together most bouillabaisse recipes. When it comes to a New England bouillabaisse, I’ve come up with three “rules” that are certain to give you good results every time.

Rule #1: Use a variety of New England fish and shellfish

Generally speaking, the more variety, the better, especially shellfish because of the succulent liquors contained within which will add wonderful depths of flavor. New England littlenecks, blue mussels, blue crab, squid and sea or bay scallops are all great.

Obviously, seafood isn’t cheap today so do the best you can. If all you can swing is one type of fish and some clams and mussels, that’s good enough. Still not cheap but when you follow rule #3 below, trust me, it’ll be worth it.

When it comes to fish, I like including both a lean, mild fish with a more oily, fatty fish. I’m sure that would be a major penalty flag to bouillabaisse purists (because fatty fish can cloud the broth) but I don’t care. I love the contrasting textures and flavors of both.

And if possible, seek out something besides cod and haddock. Lesser known species of fish have just as much nutritive value and are just as delicious as more commonly consumed fish.

Turns out, we have A LOT of them in New England too. Because if we are to support a more sustainable system of seafood, it’s important that we broaden our choices and embrace more local options.

Blackfish, black sea bass, skate, sea robin, porgy and monkfish are all mild New England white fish, similar to cod and haddock, with a tender but firm texture. Bluefish, striped bass and Atlantic mackerel would be better choices in the fatty fish department than tuna, swordfish and farmed Atlantic salmon.

If you can find something even more uncommon try it! Jonah crabs, periwinkles, slipper limpets and razor clams are rarely seen in markets but have potential if more people embraced them. And if you don’t live in New England, try whatever is local to you, including freshwater species.

Rule #2: Make your own fish stock

No yellow flags here! This is one rule the bouillabaisse purists would surely approve of. If you’ve been following my blog lately you know I say this with EVERY seafood soup recipe. The flavors you’ll create will be so superior to anything from a box or can. You can learn to make your own fish stock here.

There’s more to it than that but those three ingredients will work some serious magic with your homemade fish stock. Always include them and you really can’t go wrong. My recipe includes some fennel seeds for a little extra dose of anise flavor.

Rouille, a zesty, garlicky mayonnaise, is part of a traditional bouillabaisse. It’s not essential in my book but it sure is delicious on some toasted bread or even mixed into the broth. It is an extra step so don’t sweat it if you can’t get to it.

How to Make a Rouille

Step 1: Slice a red pepper into about four pieces and lay them flat on a baking sheet lined with aluminum foil.

Make sure to slice off the top of the pepper (so it lays flat) and remove the seeds and fleshy parts.

Step 2: Lay the pepper slices skin side up on a baking sheet and broil about 10-15 minutes, or until the skin is charred.

Remove and let cool for a few minutes. Peel off the skins. They will peel off very easily.

Gradually add olive oil in a slow and steady stream with the blade running, until the mixture thickens like mayonnaise.

Salt and pepper, to taste. Transfer to the fridge where it will further thicken.

Again, this is an optional step but man oh man a rouille spread on some toasted bread and dipped in the broth will amp your New England bouillabaisse satisfaction level from a ten to an eleven (and because Spinal Tap references are always a good thing). 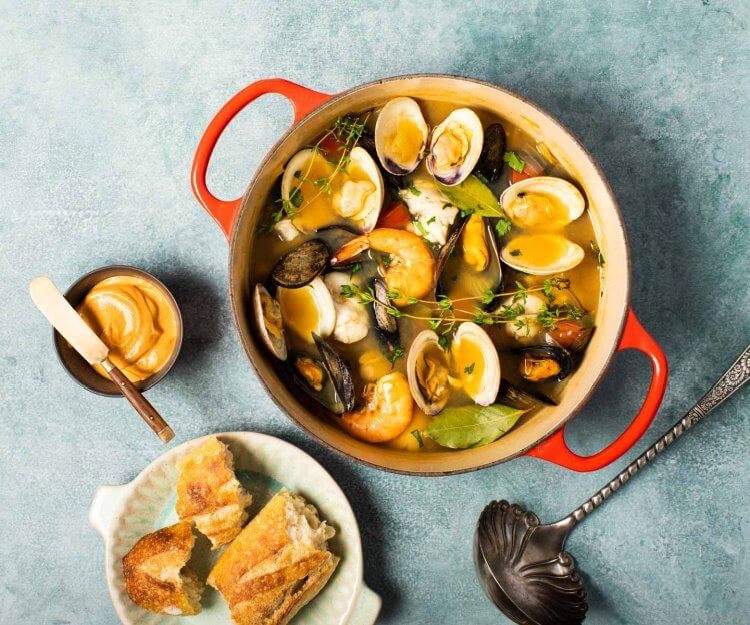 For the optional rouille (makes about 1 ½ cups): 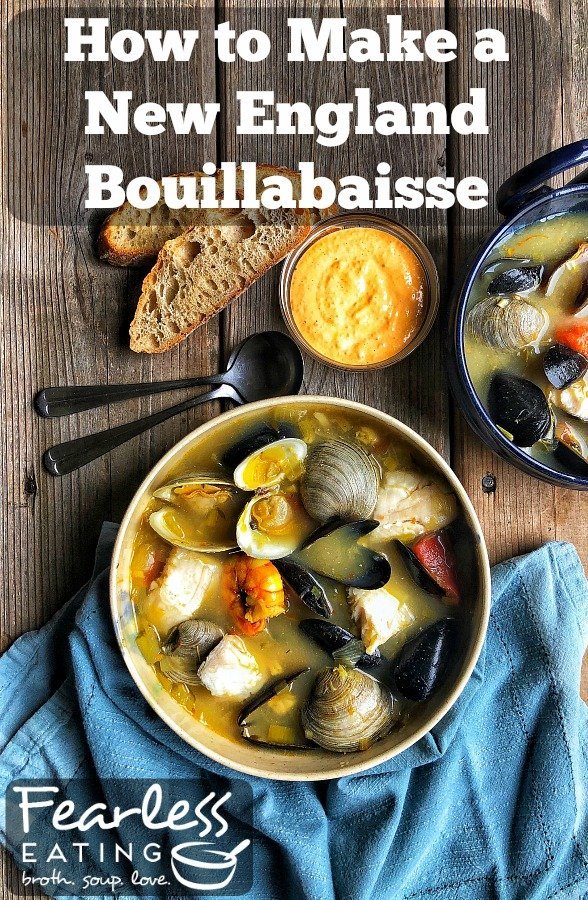