What follows is an excerpt from my cookbook, New England Soups from the Sea. Though the book includes 80 recipes for chowders, bisques, stews, and medleys, only one, a Portuguese Shrimp Mozambique, features shrimp. That doesn’t mean we need to stop eating shrimp entirely. But I do want the reader to be aware of the many environmental problems associated with the global seafood system. And there’s no better example than farmed shrimp.

Why Americans Eat A LOT of Farmed Shrimp

Judging from the popularity of shrimp on menus and the consistent year-round availability of it in our supermarkets, you might think that we’ve always eaten a lot of shrimp in America. But prior to the 1960s, most Americans were not regularly consuming shrimp. Shrimp was more of a regional delicacy, especially in the Cajun country of Louisiana.

Starting in the 1970s, as consumer tastes in seafood narrowed, ironically, our taste for shrimp expanded dramatically. Shrimp’s meaty texture and sweet taste run contrary to many types of seafood with negative connotations of “slimy” or “fishy.” Most people I know who say they don’t like seafood make an exception for shrimp. Today, the average American consumes over four pounds of shrimp per year, more than any other seafood by a long shot, including both canned tuna and salmon.

But the biggest reason we consume such massive amounts of shrimp today is that shrimp is an ideal fit for the global demand-based market system which treats seafood as a commodity without regard to where it comes from, who catches it, or how. Shrimp freezes well and can be efficiently stored, packaged, and shipped all over the world. It is available year-round, has short-life cycles, and reproduces itself quickly, thus ensuring a constant supply. Finally, it can be caught in the wild in prodigious quantities but it can also be farmed in prodigious quantities too. And that last reason is perhaps the biggest reason of all.

In the 1970s and 80s, seafood franchises like Red Lobster and Long John Silver rose to prominence and expanded our national appetite for shrimp.

Within a very short time, Americans could not stop eating shrimp. Initially, most of the shrimp came from our Gulf states. But as demand grew, cheaper, more consistent supplies were sought. Many countries from Southeast Asia with historically rich and fertile shrimp grounds saw an opportunity. To fulfill the American demand for shrimp, millions of acres of native mangrove forests were converted to shrimp farming operations, many of them financed by American corporations. And that’s the first reason to stop eating farmed shrimp.

#1: Farming Shrimp Can Cause Ecological Damage

For starters, mangrove forests are vital tropical coastline ecosystems. They are essential habitats for countless types of marine life. They act as a buffer against typhoons and hurricanes and help prevent erosion. Their dense network of roots and vegetation help improve water quality by filtering pollutants. They also sequester carbon from the atmosphere and are thus a buffer against climate change. And they provide livelihoods to countless native communities who have historically lived along the coasts as subsistence fishermen.

#2: Most Shrimp Farms are Not Sustainable

Heavy use of antibiotics has been employed for decades on shrimp farms much the same way they’ve been used in the factory farming of livestock. Man-made shrimp ponds present other issues such as a build-up of waste. Shrimp farms became so toxic that they were abandoned so that new ones could be built. The vicious cycle continued for years until the problems became so widespread that eventually producers and governments started to recognize the ecological damage and the need for better, more sustainable means of production.

Today, improvements are being made and that’s a good thing, but problems persist and only a very small percentage of imported farmed shrimp is inspected. You really don’t know when you buy farmed shrimp from abroad what standards or lack of standards were followed.

But even with more sustainable methods of production, the bottom line is that most of the farmed shrimp industry still operates within the economic model of global demand, which basically means capitalism. And that model means the very countries producing this shrimp, such as China, Thailand, Vietnam, India, and Indonesia, export the overwhelming majority of it to wealthier nations.

Countless native subsistence fisheries, that once produced food for their own communities, have been displaced by multi-national shrimp operations. Meanwhile, our national shrimp fisheries have struggled to compete with the low prices of mass-produced farmed shrimp from overseas. Today 90% of shrimp consumed in the United States comes from foreign shrimp farms.

I had a chance to speak recently with Jared Auerbach, former fisherman, and CEO of Red’s Best, a seafood company in Boston that works with small-scale community-based fishermen. I asked him what he thought of our government-regulated national fisheries and their strict system of quotas and rules. The first words out of his mouth?

He went on to say, “Our national fisheries should be a source of pride for us because they’re thriving and sustainable. Regulations have NOT allowed free markets to dictate it which is pretty incredible when you think about it because most Americans, especially those in business, are free-market capitalists.”

Jared went on to say that New England waters, including Boston Harbor, are now clean and beautiful because of regulations and that it saddens him that others don’t realize how much progress has been made.

He feels there’s too much negativity in the media, and too many clickbaits about overfishing, pollution, and other issues. He points out that in recent decades fishermen, scientists, legislators, and environmentalists have done some great work to sustain our fisheries and that while there are very real threats to our ocean ecosystems, supporting more local seafood from America would go a long way to minimizing those threats.

A great place to start would be to STOP eating farmed shrimp from overseas.

We have great shrimp right here in the United States! Our abundant coastlines are rich in many different types of shrimp, both cold and warm water varieties. Most American shrimp fisheries are wild-caught and not farmed. You may know that the most prolific region in the Gulf of Mexico where the overwhelming majority of American wild shrimp comes from. But there are other smaller shrimp fisheries all along our coasts.

Of course, some say that the demand for shrimp is so high in America that American shrimp fisheries can’t meet it, therefore we need to buy farmed shrimp from other areas of the world. These arguments almost always come from those who benefit, in this case, the shrimp aquaculture industry.

How to Stop Eating Farmed Shrimp

So here’s an argument that the multinational shrimp companies don’t want you to hear: Why just NOT eat shrimp from overseas and look to more local options? Clams, mussels, scallops, crabs, crayfish, and even fish can all be used in place of shrimp in many recipes. It’s really not that radical when you think about it. It just takes some awareness and a change in buying habits.

New England Soups from the Sea is a great place to start. It includes a species guide to local New England fish and shellfish so that readers can learn about a greater diversity of local seafood options.

For the good of our oceans and local fishing communities, we need to expand our seafood choices. There’s so much more to seafood than farmed salmon, canned tuna, and farmed shrimp!

Finally, read labels at the supermarket when buying shrimp. You’ll be amazed when you see how much of it comes from overseas. Think twice about going to an all-you-can-eat shrimp buffet at a popular “local” seafood chain restaurant.

As consumers, we have more power than we think. Our collective choices can make a bold impact. Our oceans and national fisheries desperately need us to support a more localized and sustainable supply-based economic model.

An important part of this transition is to re-acquaint ourselves to the wonderful diversity of seafood that exists right here on our coasts. 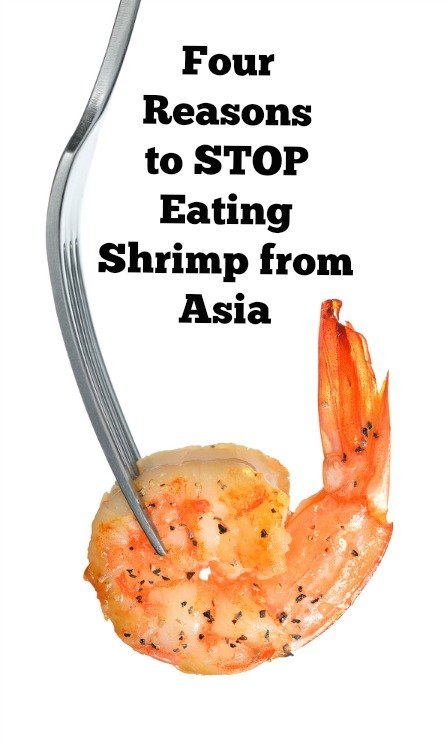