Why and How to Make a Portuguese Squid Stew

When was the last time you saw a squid stew on a menu? Probably never, right? But if you did, would you order it? Probably not, right? Why risk spending a bunch of your hard-earned money on something you’ve never had before. It would take a little leap of faith to order a squid stew.

As strange as a squid stew might seem, consider this quote by chef Howard Mitcham from his Provincetown Seafood Cookbook:

“In the hands of a skillful cook this octopusfaced monstrosity is one of the world’s greatest seafood delicacies. But poor thing, nobody knows how to cook him, except a few million Chinese, Japanese, Siamese, Vietnamese, Indonese, Micronese, Melanese, Javanese, Balinese, Nepalese, Polynese, Portuguese, Italians and Spaniards.”

Mitcham goes on to criticize Americans for not embracing this plentiful seafood delicacy that is more often used as food for fish (in the form of bait) than food for us. That said, we have been eating increasing amount of squid since Mitcham published his classic cookbook in 1975. However, the overwhelming majority of it is in the form of calamari (which is Italian for “squid”) appetizers in restaurants. Very few would dare purchase fresh squid or have a clue what to do with it at home.

Let’s start to change that today. It’s important! We need to embrace more of our local seafood from our own waters. We need to re-learn traditional cooking methods and simple ways to use seafood. A squid stew is a great place to start, in particular, a Portuguese squid stew.

5 Reasons WHY You Should Make a Portuguese Squid Stew

Did you know that over 90% of seafood consumed by Americans eat is imported? Considering we have thousands of miles of coastline teeming with native species of fish and shellfish, that is absolutely ABSURD.  Squid is abundant almost everywhere in our oceans but especially from Maine to North Carolina.

Furthermore, unlike many species we import, domestic squid is not overfished and it is sustainably managed. By expanding our curiosity, by embracing more diversity from our local waters, such as squid, we help to support more local fishermen, many of whom struggle to compete with large-scale (and often destructive) international seafood companies.

2. Squid is easy to prepare

When you buy squid from a local fishmonger, it will more than likely come already cleaned, meaning its eyes, beak, viscera and quill will be removed. At that point, all you have to do is slice the long hollow body into rings and slice off the tentacles. Yes, this will look just like calamari looks!

It’s one of the cheapest foods from the sea on a per pound basis.

4. Portuguese cuisine is delicious and making new things is fun

I’m guessing Portuguese cuisine is not something you’re totally familiar with. Here in Massachusetts where I live, there’s a strong Portuguese influence, especially on the south coast in the Fall River and New Bedford areas. The cuisine is rich in seafood and has a plethora of traditional soups and stews that utilize all types of fish and shellfish. I’ve been having a lot of fun experimenting with many of these lately, including a Portuguese clam stew, and I can’t tell you how unbelievably delicious they are! Well I can, but you have to make one yourself to truly believe it.

5. Because a Portuguese squid stew is freakin’ AWESOME.

That’s not only my opinion! I included this recipe in my new cookbook, New England Soups from the Sea, because it was a huge hit during the recipe testing phase.

I also include it in my cookbook because of reason number 4 above.

Approximately twenty percent of the recipes are Portuguese recipes. A few examples include a Portuguese seafood stew, Portuguese clam chowder, and Shrimp Mozambique.

OK, now let’s learn how to make the squid stew.

How to Make a Portuguese Squid Stew

Everything you need to make a Portuguese squid stew can be found in any supermarket. The one exception would of course be fresh squid. Try to avoid buying pre-packaged frozen squid which is more likely to come from large-scale commercial operations that use demersal otter trawls, a large net that is dragged across the ocean floor that can easily damage sensitive seabed ecosystems.

Once you have all the ingredients it’s quite easy to make. The full recipe is below (which you can print out) but let me simplify it for you by boiling it down (pun intended) to 3 simple steps with some visuals.

Step 1.  Saute onion, peppers and garlic for about 5 minutes after which you’ll add the squid and some spices.  At this point, it will look quite delicious…

Don’t worry. It will slowly transform into a beautiful squid stew through the last step.

Step 3. Simmer the stew very gently for at least two hours but as long as four hours. All those flavors will condense and intensify. I took an off-the-cuff video for my Instagram page which should give you a good idea of what it will look like after several hours of simmering…

Once it’s nice and thickened, you’ll serve it over steamed rice in individual bowls and let each person season it to their preferred taste. Common seasonings are salt, pepper, parsley, cilantro, hot sauce and red pepper flakes. Add as much as you desire of any of those. However, I’d HIGHLY recommend adding some lime juice from fresh lime wedges. The sweet and sharp acidic flavor of lime really complements the tomatoes, red wine and spices. Everyone at my tasting party agreed!

One last tip. For the liquid base, you can use fish stock, chicken stock or clam broth (also called “clam juice”). I’d highly recommend clam broth, in particular, Bar Harbor brand clam broth. Clam broth gives the stew a fantastic background briny flavor of the sea, which you know, you kinda want for a seafood stew. But other types of bone broths/stocks are suitable to use as well. 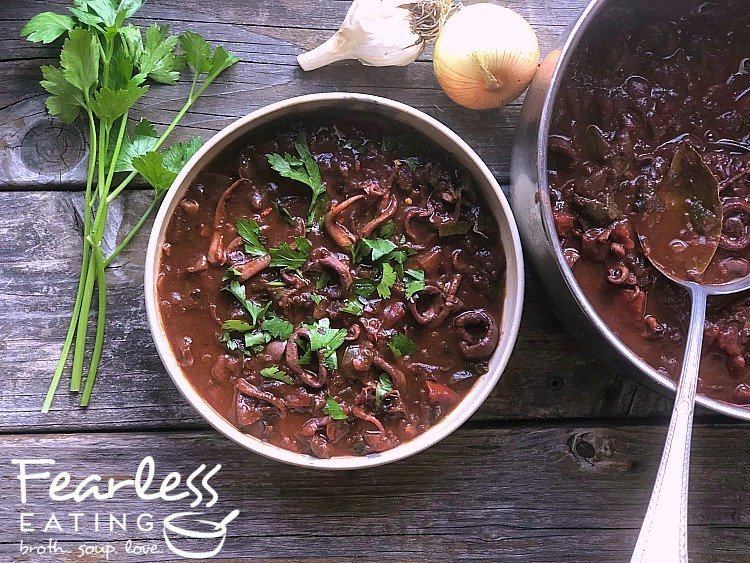 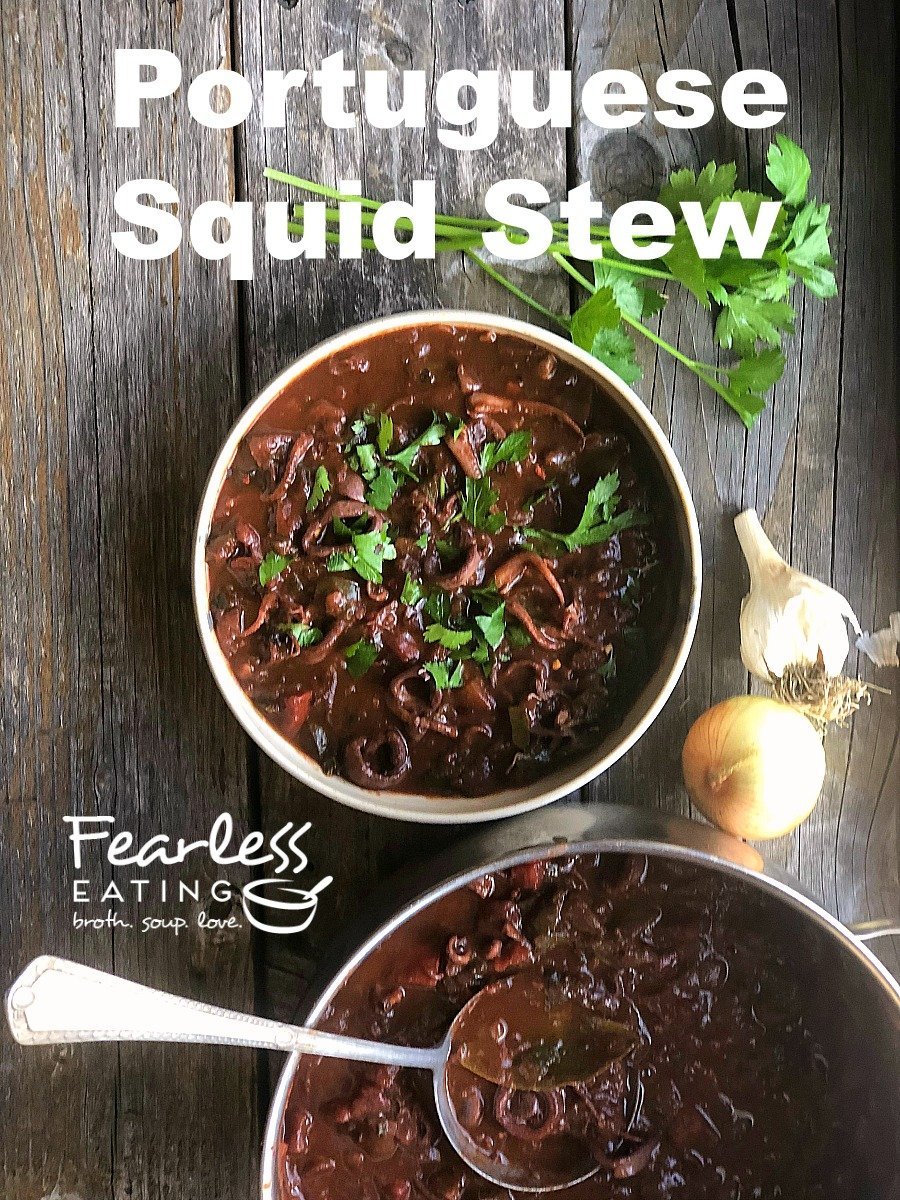