I couldn’t agree more. Fast forward to today and fish broth is still without a doubt, the most underused, undervalued, and underappreciated broth. When made properly, it has a delicate, aromatic, fresh ocean flavor that elevates the flavor of countless seafood soups and stews. And it’s actually simpler to make, cheaper, and less time-intensive than chicken or beef broth.

Don’t get me wrong. I know that finding fish bones, heads, and carcasses is not as easy as finding chicken and beef bones. I also understand that modern kitchens are not always ideal for working with whole fish. And let’s face it, most people get a bit squeamish when using whole fish. In this comprehensive post, I will show you how to easily find fish bones and I’ll share a great store-bought option for those of you who don’t want to make it at home.

But first, let’s clarify some terminology.

Generally speaking, they’re the same thing. In the culinary world, fish broth is more commonly referred to as fish stock. But in recent years, the words “bone broth” have become sort of an umbrella term, used mostly by health and food bloggers, for all types of broths and stocks. You’ll now see “fish broth” as much as “fish stock.”

For that reason, I’m going to stick with fish broth in this post. That said in my new seafood cookbook, New England Soups from the Sea, I do stick with the terminology of the culinary world.

Basic fish stock is quite similar to making a basic chicken broth. Throw your bones/carcasses into a stockpot filled with water. Add carrots, onions, and celery. Simmer it for a while and then strain it. The result is a delicate fresh fish flavor. A robust fish stock uses a technique called “sweating”, which cooks the fish before adding the water. This brings out a more robust flavor in the broth. In this post, I’m going to show you how to make a robust fish broth.

Regardless of which type you make, the biggest question most people want to know is…

Where to Buy Fish Bones

There are a few options. The first is local fishmongers. Because very few people in America buy whole fish anymore, most fishmongers are forced to throw away fish carcasses after they fillet the fish.

Ask them if they can set some fish bones aside for you. They’d be happy too. And most will probably not charge you much. They are not in demand and can be purchased quite cheaply. Some may even give them to you for free, especially if you’re a regular customer.

The second option is to order fish bones from an online supplier. Online seafood suppliers are becoming more common. This is a good thing because it allows them to sell directly to consumers.

Selling direct creates a more equitable relationship between fishermen and consumers. It gives consumers increased access and diversity to locally-caught seafood, pays fishermen a fairer price for their work, and strengthens the economies of local fishing communities.

A favorite of mine is The Local Catch out of Rhode Island. If you live on the southern coast of New England, you can order in-season, fresh, locally caught fish and shellfish and have it shipped right to your doorstep. Similar to fishmongers, they probably won’t have fish bones listed for sale. But just ask. More than likely, they’ll have some.

You can also check out the Seafood Finder on The Local Catch Network to find options in your geographic location.

How to Make a Robust Fish Broth

Ok so let me show you how to do it in a simple video demo. Now, I made this video years ago. In the interim, I’ve learned quite a bit more and there are a few things I would say differently. See the text below the video for some updated info. But the basic technique I demonstrate for a robust fish broth remains the same.

First, you can use oily fish for a fish stock/broth. I’ve since learned that this idea that only non-oily fish are suitable is a bit of a myth that’s been passed down from French cuisine. I had a colleague in Alaska who made fish broth from salmon carcasses and it was absolutely delicious. I’ve made fish broth using bluefish and I loved it. Oily fish will create a very strong-tasting broth. But it pares well with soups that feature oily fish, which are stronger-tasting than nonoily fish. Of course, these dishes are less common than their nonoily counterparts but a few examples might be this bluefish chowder or wild salmon chowder.

Second, I’m not sure why I said the veggies are optional. They really add some important flavors so I wouldn’t skip them. The wine and herbs are optional, but they add some great flavors too.

Third, do NOT put the cover back on once the water comes to a gentle simmer. Putting the cover on could easily raise the heat above a gentle simmer which we want to avoid because it can overcook the delicate fats.

Fourth, if you desire a more gelatinous broth, about halfway through simmering, press into the fish heads with a kitchen utensil. This will break them apart and facilitate the collagen out of the heads and into the broth. When the broth cools, that collagen will form gelatin.

I know that many folks are just not going to buy fish bones and make it at home. No judgment here. I understand. Luckily, there’s a good store-bought option.

That would be Aneto Fish Broth. This is the only store-bought fish broth I can enthusiastically recommend. Now it’s a little pricier than other store-bought seafood stocks and broths. But it’s worth it because the rest use a lot of cheap ingredients and flavorings. The rest are also pretty horrible tasting, in my opinion. They’re either too fishy or too flat-tasting.

If you’re not going to make your own, Aneto is your next-best option by a nautical mile. The flavor is quite outstanding for a packaged seafood broth. Even more impressive, they don’t use any chemical flavorings. Find Aneto Fish Broth here.

If you don’t want to make it and Aneto is not available, there are some good substitutes that can mimic fish broth’s flavor.

Clam juice has a stronger flavor than fish broth but it can be diluted in water.  To what degree you dilute the clam broth is up to you and your taste buds. It also depends on the flavor. Some brands are better than others. My post on clam juice reviews the 5 most common store-bought brands.

The most common example is a Japanese dashi broth which is made from kombu, a type of dried sea green. A sea greens broth has a delicate sea tang flavor that can be used as a substitute for fish broth. There are many types of dried sea greens in stores. Any of them would be suitable. Here’s a good post on how to make a dashi broth.

Some Recipes that Use Fish Broth

My new cookbook, New England Soups from the Sea, includes dozens of recipes that use fish broth! Besides a basic fish stock and a robust fish stock, it also includes a wide variety of fish chowders, brothy fish soups, and different types of seafood stews and medleys. 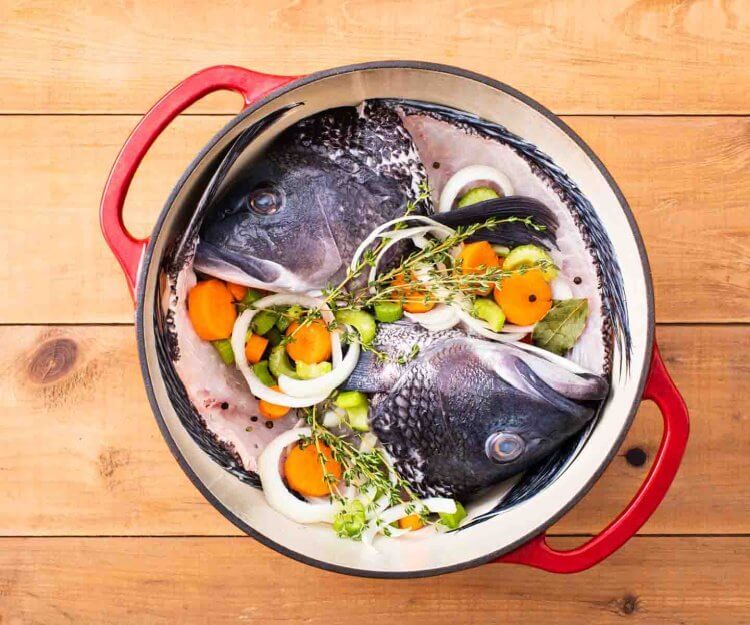 A robust fish broth uses a technique called "sweating" to bring out a stronger flavor from the fish. 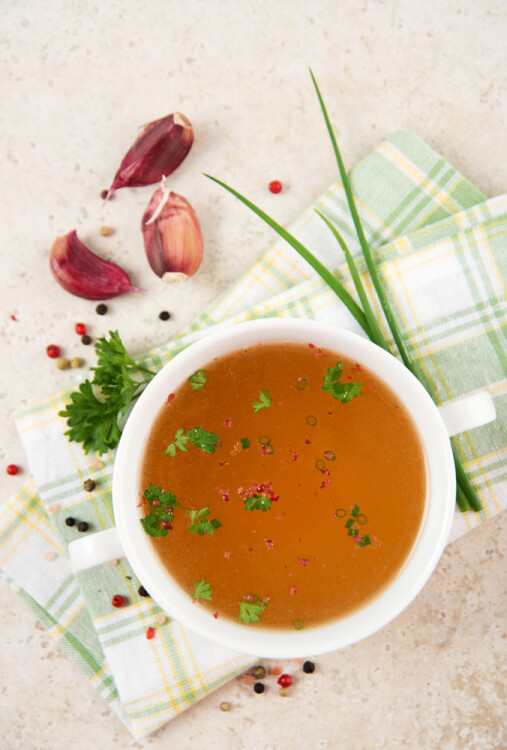