Shrimp Mozambique is one of those fascinating recipes that exist only in small regional pockets of the United States and I’m excited to include it in my new cookbook, New England Soups from the Sea. Though the name suggests it’s an African dish, it’s actually Portuguese so you’ll often hear it referred to as Portuguese Shrimp Mozambique. You’ll find it in the Portuguese communities on the southern coast of New England (such as Fall River and New Bedford, Massachusetts) but its roots are, in fact, in Africa.

What is Portuguese Shrimp Mozambique?

Portuguese Shrimp Mozambique is a delicious buttery, garlicky, spicy, stew-like dish made with onions, garlic, a little beer or wine, and, of course, shrimp. As you can imagine, the dish gets its name from Mozambique, Portugal’s former African colony.

The defining ingredient is an African chile pepper known as a piri piri pepper (sometimes spelled peri peri). Over time Portuguese colonists cultivated and adapted piri piri peppers into their own cuisine.

Like all traditional dishes, there are many different versions of Shrimp Mozambique. Some use fresh, whole piri piri peppers and some use a piri piri hot sauce. However, piri piri peppers, be it fresh or in hot sauce form, are hard to find outside specialty Portuguese markets in America. Most recipes use other types of peppers or hot sauce.

Many versions also include a dried spice mix made of annatto, coriander, cumin, and oregano. More on that below.

Though the name may sound exotic, the dish is actually very simple to make. Once you have all the ingredients it shouldn’t take more than a half-hour!

That’s everything you’ll need. Going clockwise from the upper left we got shrimp, olive oil, butter, white wine, clam juice, hot sauce, an onion, garlic, and parsley and lemon. In the middle is a spice mix known as Sazon seasoning. Two of those ingredients need a little more explanation.

What is Sazon Seasoning?

It’s a popular spice mix used in Latin, Spanish and Portuguese cuisine that is typically made of annatto, coriander, cumin, oregano, pepper, and salt. Perhaps the most popular version is Sazon Goya con Culantro y Achiote (Sazon with Coriander and Annatto).

Everybody online seems to love this seasoning blend. I ordered some but was disappointed when I saw the ingredients which are full of artificial flavors and colorings. If you want convenience though, you can find it here. But you can easily make your own. I’ve included a simple homemade Sazon seasoning in the recipe below. The only spice you may not easily find is ground annatto which gives the dish a deep red color. Any mild paprika is a suitable substitute.

Clam juice! I love the briny kick it gives the dish though it’s not a traditional ingredient. Leave it out if you desire a more authentic experience.

That said, in my opinion, a little clam juice makes it more like a stew and less like a sauce. It also gives it a slightly more pronounced seafood flavor.

Just make sure to use a good quality clam juice, like Bar Harbor. There are some really lousy clam juice products out there that I discussed in my detailed post about clam juice.

Piri piri hot sauce is hard to find outside specialty Portuguese markets though you may be able to find it via online sellers. Click here to find some options on Amazon. But really, any type of hot sauce you like is perfectly fine as a substitute.

The Best Type of Shrimp for Shrimp Mozambique

That would be any wild-caught US shrimp. It’s a much more sustainable and environmentally responsible choice than farmed shrimp from overseas. My post, 4 Reasons to Stop Eating Farmed Shrimp explains this in more detail.

It depends on your heat tolerance. If you’re using a piri piri hot sauce, know that piri piri is a moderately spicy hot pepper. For those with a high tolerance, it’s probably fine. For others, it can be light-your-mouth-on-fire spicy. But again, you can alter the heat level by choosing any type of hot sauce you want. Frank’s hot sauce would be a good choice if you want a mild but not overpowering kick.

A Quick Summary of Steps from the Video

Step 1. Dice and saute the onion and garlic in olive oil and butter

Step 3. Add the wine and clam broth, bring to a boil, and simmer until the liquid reduces by about one-third.

Step 5. Add shrimp and simmer until they turn pink and cook through about 3 to 5 minutes.

Step 6. Ladle the stew into bowls and season with salt, pepper, fresh parsley, and/or lemon juice, to taste.

WHAT TO SERVE WITH SHRIMP MOZAMBIQUE

Shrimp Mozambique is commonly served over white rice, fries, or pasta. It can also be served as is without any starch. In that case, some crusty bread is great for dipping into the stew.

This recipe for Shrimp Mozambique is featured in my new cookbook, New England Soups from the Sea. Approximately 15-20% of the 80 recipes are Portuguese because there is a strong Portuguese identity in many communities in New England, especially the southern coast of Massachusetts and Rhode Island.

Many have roots dating back as far as the early 1800s when New England whaling ships sailed across the Atlantic and brought back Portuguese men looking for new opportunities.

These communities have adapted their native cuisine to native New England foods, especially the seafood, and nowhere does that fusion shine better than in the seafood stews. This is, in my highly biased opinion, the ultimate way to experience Portuguese cuisine in New England.

Some of the recipes include a Simple Portuguese Clam Stew and a Portuguese Squid Stew. There are also Portuguese-style chowders, clam boils, and many other recipes sprinkled throughout the cookbook. 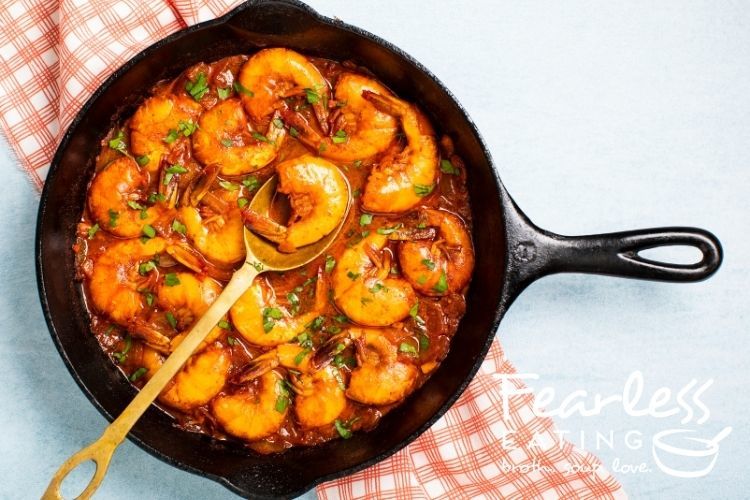 With only a handful of ingredients, this zesty Portuguese shrimp dish can be whipped in a half hour or less!

For the Sazon spice blend 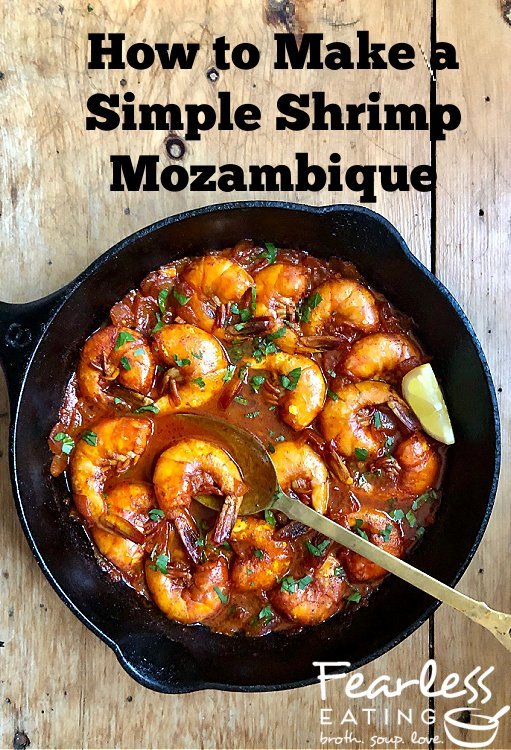