But first, understanding the difference between a clambake and a clam boil will clarify exactly what a clam boil is.

Clambakes are usually epic feasts that can feed dozens if not hundreds of people. They are traditionally prepared by steaming everything in a large fire pit that has been dug on the beach. The pit is lined and heated with stones and wood, layered with fresh seaweed (which produces lots of moisture and steam), and then covered with a tarp or canvas that traps all the heat. It’s a time-consuming all-day affair, so much so that many people now hire caterers to do it for them.

Clam boils include the same ingredients but everything is boiled in a large pot instead, thereby also creating a delicious broth as a byproduct. Clam boils take a fraction of the time to prepare and cook as a clambake. They can be made in about a half-hour by anyone, anywhere with just a stockpot and stovetop. Clam boils are typically also meant for groups of people, just on a much smaller scale.

It includes the same types of seafood and similar vegetables as a typical New England clam boil recipe. However, Portuguese versions include chourico or linguica, the two classic smoked and spiced sausages of Portuguese cuisine which add a smoky, zesty flavor to the broth. Additional spices are often added to the broth such as paprika and red pepper.

Portuguese New England clam boils are closer in spirit to the iconic shrimp boil and crawfish boils of Cajun country which is renowned for having highly seasoned and spicy broths. So yes, a Portuguese New England clam boil broth will have some heat! You can tone it down or ramp it up with more or less of the seasonings. Adjust the flavors any way you want. You could even add some hot sauce if desired.

My version below takes things a step even further by adding some wine, apple cider vinegar, and lemon in the initial stages of making the broth. I also boost the clam flavor with some additional bottled clam juice. I think it adds fantastic depth and character to the broth. Personally, I think the broth is the best part of clam boil recipes!

Yes, clam boils include clams. I know, shocking! These are typically soft shell clams (steamers) and/or hard shell clams, typically littlenecks. Sometimes larger hardshell clams like cherrystones are used but they can take up valuable space in your stockpot.

Small to medium-sized waxy potatoes that hold their shape when boiling are best. Red, new, fingerling, Yukon gold, and purple potatoes are all great. Avoid Russet potatoes which easily fall apart when boiled.

Onions are perhaps the most underrated part of clam boils (more on that below). Similar to potatoes, you want smaller to medium-sized onions. Yellow and red onions are both great. I particularly love the sweet, crisp flavor of red onions in clam boils. Whichever you choose, make sure the onions are fresh, very hard, and without any soft spots. The skin should adhere firmly to the flesh.

Fresh local summer corn is always best and this is one of the many reasons that clam boils are typically held in warmer months. But sometimes an indoor winter clam boil is just as good! In that case, you may skip the corn on the cob, though it is possible to purchase frozen corn on the cob. It will have been lightly blanched before freezing and will only require about half the boiling time as fresh uncooked corn of the cob.

This is one of my favorite parts of Portuguese clam boils! The spicy, crispy crunch of a juicy Portuguese sausage, followed by a salty clam and a slurp of clam juice is a trifecta of flavor that has to be experienced. As mentioned above, chourico or linguica are the most common Portuguese sausages. Linguica is milder than chourico. If you can’t find either one, try to find a smoked chorizo sausage, which is very similar.

You’ll often see clam boils enhanced by mussels and/or lobsters. Feel free to add them, in any amount you want (or that will fit into your stockpot). Garlic is another frequent addition. Add a few cloves for smaller serving sizes or for larger amounts, simply slice an entire unpeeled garlic bulb in half, crosswise, and add it with the potatoes. I think garlic makes a great addition to Portuguese clam boils.

The larger the group, the bigger the stockpot you’ll need. Old-school traditional outdoor seafood boils that serve large numbers of people utilize huge stock pots (some can be upwards of 100 quarts) that are heated on portable outdoor gas stoves. My serving size of 6-8 people will still require a fairly large stockpot. At a minimum, you will need a 20-quart pot. This 20-quart Cook’s Standard Classic Stockpot is the one I have and recommend:

It’s stainless steel and has a heavy bottom for even heat distribution. The handles are really sturdy which makes lifting a bigger and heavier pot a lot safer. I’ve had it for over a decade now and it’s my go-to stockpot for making large batches of bone broth or other larger preparations like clam boils.

Find it here on Amazon

You might also consider a steamer rack insert that fits inside your pot. Simply lifting it out when everything is done is a super-easy way to remove all the ingredients. Without a steamer rack, you’ll need a good-sized slotted spoon to scoop and transfer everything out of the pot. You could also use a sturdy strainer with a long attached handle.

It can be difficult to gauge how much to cook in a group setting. Different people have different appetites. I’ve heard that in cajun country, locals will consume 4-5 pounds of food at a crawfish boil. Old-time stories of communal New England shellfish feasts tell similar tales of prodigious consumption. Personally, I could easily down 4 dozen clams and mussels (about 2 pounds) and a good pound or two of everything else. Seafood feasts can readily bring out some hefty appetites in people! It’s always best to cook too much instead of too little. Save everything and have it for leftovers.

That said, our modern-day whacky nutrition climate of trendy diets, calorie counters, people terrified of salt and fat, and people on god-knows-what medications, will probably mean your group will have its share of more moderate eaters (not to mention those that won’t like any seafood). That’s good news if you’re a seafood fanatic like myself. More for us!

My recipe serving size is for 6-8 people. You may have to adjust those amounts up or down.  Generally speaking, here’s an estimate of an average per person serving broken down into individual amounts.

How to Cook a Portuguese Clam Boil

For something as simple as boiling things in water, you’d be amazed at the different methods of cooking a clam boil. It can be a little tricky to cook everything perfectly, especially with larger servings. The more people, the bigger the pot, the more challenging it will be, but all in all, most things turn out good so don’t stress it. The real joy is the shared feast with fellow friends and family.

The size of your ingredients, how you chop and slice them, and the order in which you add everything to the pot, will determine how it all cooks. The idea is to cook everything as evenly as possible. Make sure you have a suitable stockpot to fit everything inside.

Step 1 – Create the seasoned broth (directions in the recipe card below) and bring it to a boil.

Step 2 – Reduce the heat slightly, add the potatoes, cover the pot and boil for 7-8 minutes

Step 4 – Add the onions and sausage for 5 minutes

Step 5 – Add the clams for another 5 minutes or until all the shells open.

For the potatoes, slice the smaller ones in half and quarter the medium-sized ones. This will not only make them cook quicker but they’ll better absorb the flavor of the broth.

For the corn, slice them in half or thirds.

For the sausage, also slice them in half or thirds.

For smaller onions, about the size of golf balls, you can add them whole but for larger ones, slice them in half.

I add the onions with the sausage which is a little later in the process than most clam boil recipes. Personally, I love a lightly boiled onion. A light boil will remove its sharp taste but retain a nice crunchy texture. Most boils add the onions with the potatoes. This almost always turns them overly soft and without much flavor. I don’t understand how anyone likes a mushy, overcooked onion. I’ve noticed at clam boil parties that the onions tend to be the most ignored item. For this reason, I suggest adding them with the sausage.

Finally, know that depending on the size of your stockpot, it’s quite possible that by the time you add the shellfish, many may not fully submerge in the water. That’s fine. They’ll steam right on top of everything else.

How to Serve a Clam Boil

There are no rules here but just know that serving it is typically messy and that’s part of the fun! For clam boils served inside, transfer all the ingredients into several large serving bowls. For boils served outside, typically tables are lined with newspaper and everything is dumped on top. I’m not a big fan of newspaper ink potentially leaching into my food but do whatever you see fit. You can purchase eco-friendly jumbo brown paper rolls that can act as a table lining.

Put out a few trays or empty large bowls for people to dispose of their clamshells and corn cobs.

No clam boil is complete without small dipping bowls of broth and melted butter. Make sure to serve lots of sliced lemon wedges so that each person can season their bowls to their heart’s content.

Finally, fresh bread is a fairly common clam boil side dish. Trust me when I say that one loaf will be devoured quickly, especially when it can be dipped in broth and butter. I’ve learned the hard way that some of your guests may eat more bread than anything else. Include at least two loaves to keep your gluten-guzzling guests happy. 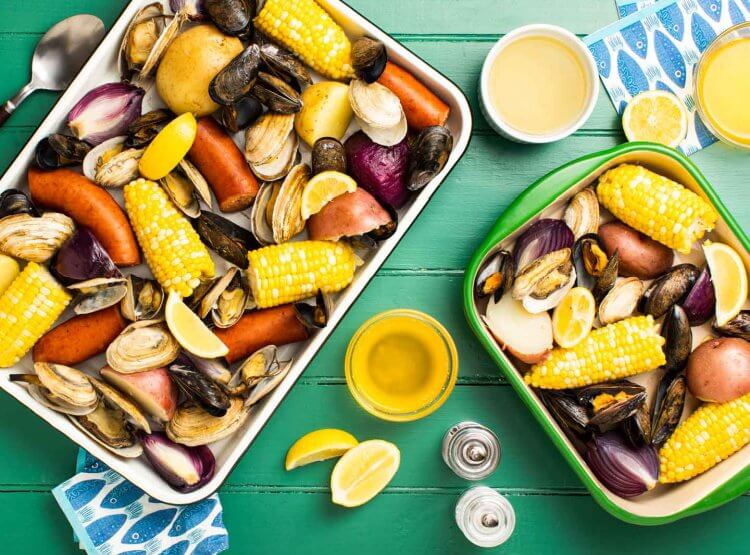 A Portuguese New England clam boil is kind of like the simplified version of a clam bake. Here's a simple recipe that can be made in less than a half hour.

For the rest of the boil

Seasonings and accompaniments, to taste 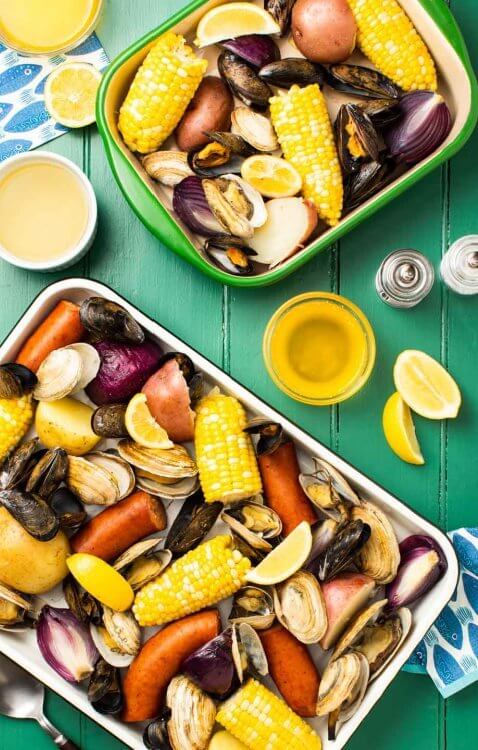