How to Make a Hanoi Pho

Most of what’s served in Vietnamese restaurants in America is the Saigon-style, which I featured in part 1 of this 3-part series. I’ve read that many Vietnamese are VERY opinionated as to which type of pho is the best. Regional food debates can get quite passionate! I imagine it’s similar to the heated debate between New York pizza vs. Chicago-style pizza.

And this is perhaps why my new favorite type of pho is in fact…Hanoi-style pho.

Because as a native New Yorker, just the words “deep dish pizza” make my blood boil. Chicago-style pizza is like eating a pizza sandwich. It’s way too doughy with too many toppings. Just get a calzone or an Italian sub for god’s sake. The best pizza is plain and all about that magical combination of a thin crust, cheese, and sauce. All that extra fancy stuff obscures the very essence of pizza!

And that’s kind of how Hanoi pho enthusiasts look at pho. They think it’s a simpler, purer form of pho.

OMG. Now, this is how pho is really supposed to taste!

Most of us in America are familiar with Saigon pho, which is sweetened with sugar and then served with sriracha and hoisin sauce for additional flavoring. It’s also accompanied with lots of herbs, bean sprouts, and lime wedges.

It’s delicious, of course, but my one criticism of Saigon pho is the ubiquitous use of Hoy-Fun brand sriracha (the one with the rooster on the bottle) and Lee Kum Kee brand hoisin sauce. They tend to give it a somewhat homogenized flavor because almost every restaurant uses these two brands. They also can easily overpower the flavor of the beef broth.

But with Hanoi pho, it’s ALL about the beef broth. There’s NO sriracha, NO hoisin sauce, and minimal garnishes. I guess it’s kind of like how pizza should be all about, you know, pizza, and not stupid amounts of toppings.

And when the beef broth is made the old-school way, slowly simmered with charred ginger and onion and those classic pho spices, man does it develop some unbelievable flavor.

How I Learned to Make a Hanoi-Style Pho

Via the Pho Cookbook by Andrea Nguyen.

It’s written by Andrea Nguyen, a native of Vietnam, and she explores a wide variety of ways to make pho. But it’s her three recipes for what she calls the “old-school stunners” that inspired me to write this series.

These stunners are made in the traditional way, with a broth that’s been slowly simmered for hours, the way they’ve been doing it for decades on the streets of Vietnam.

As I always do when I learn a new recipe, I adapt it to suit my own tastes (and to what I can find in local food stores) without venturing too far from the original. I usually make it a few different ways with a few different twists, compare the results, share what I like and don’t like, and give you some options to make it how you like it.

How to Make Hanoi Pho

There are 9 steps to make a Hanoi pho (see the full, printable recipe is at the bottom of this post). The first two are identical to Saigon pho.

Step 1. Get your beef broth going with a variety of beef bones

I don’t want to repeat myself verbatim from my last post (and Google doesn’t like it either) so please refer to the first two steps here.

In brief, get about 6-7 pounds of a variety of beef bones, cover them with filtered water in a large stockpot, bring the water to a boil and skim the scum that rises to the surface.

For this recipe, I used some shallots in place of onions (which Nguyen recommended for more savory notes) and charred them (along with the ginger) via a high heat broil in my oven…

You then want to peel and slice off the charred bits…

Add the shallots or onion and ginger to your beef broth.

For the spices, that would be 1 cinnamon stick, a few whole cardamom pods (crushed to expose the seeds), 1 teaspoon fennel seeds, and 4-5 star anise.

These are similar to the spices used in a Saigon-style pho with a few small exceptions. But the biggest difference here is that there’s NO sugar added. One of the defining features, if not THE defining feature, of Hanoi pho is its savoriness. And that’s why dried shrimp is added too.

This dried shrimp pictured above was from my local Asian food market. You could also use other types of dried seafood like scallops and anchovies. You should be able to find something in any Asian food market because dried seafood is a common addition to many Asian soups, pastes, and sauces. And that’s because of its umami flavor!

But if you can’t find anything, it’s not that big of a deal. Just skip it.

Simmer everything in steps 1-3 for about 4-6 hours.

Now the next step is optional but I made this Hanoi pho recipe twice, once with step 4 and once without it, and I can say with absolute confidence that you should do this…

Peel it, core it and then slice it up into small chunks and add it to the broth.

I don’t know how common this is in Vietnam but Nguyen recommended it to give the broth just a delicate hint of sweetness.

All I can say is that it took the broth to an out-of-this-world sort of level. Without the apple, the broth was still great, so no big deal if you skip this step. But there’s a subtle, albeit noticeable, more rounded, balanced flavor with it.

Step 5. Strain the broth and add fish sauce, to taste

After simmering for 4-6 hours, remove the broth from the heat and let it sit for about 15-20 minutes. Then strain it using a fine-mesh strainer and/or fine mesh cheesecloth. Next, season it with fish sauce.

Start with 2 TBSPs and taste. Add up to 2 TBSPs more, to your desired taste. If you’re making this for a group of people, go easy here and let each person add additional fish sauce, to their personal tastes, when it’s served in individual bowls.

Also, if you’re not going to use the broth right away, don’t season it with fish sauce until you’ve removed it from the fridge and reheated it.

Try to use shaved beef or just slice any cut of beef as thin as possible.

Again, I’ll refer you to part 1 in this series, because steps 6 and 7 are identical. In brief, use any type of beef you want but sirloin and NY strip are good cuts to use.

Step 8. Prepare your herbs and seasonings

For the herbs that would be the classic trifecta of pho herbs – cilantro, Thai basil, and mint. You don’t have to use any of them, if you don’t want. Many Hanoi pho purists feel that even the herbs can distract from the flavor of the broth. Nguyen doesn’t use Thai basil in her recipe but I just love it so much, so I did use a little bit. Green onions are also a common addition.

For the seasonings, there’s very little other than fish sauce. But you could add a simple homemade sauce of garlic, chiles, and vinegar.

It’s a simple garnish that complements Hanoi pho well with sour and spicy notes. This is totally optional, though recommended if you can remember to prepare it the day before. And it’s so easy to make. Nguyen has a simple recipe in her book that I slightly adapted to my taste.

Take 2-3 cloves of garlic, crush them slightly, split one or two chiles and then add a quart cup each of rice vinegar and water to a small glass jar.  Cover and put it in the fridge for a day to meld the flavors and it’s ready to go.

You can play around with those amounts and find what you like. Nguyen used a 2:1 ratio of water to vinegar but I thought that was a bit too diluted. And she only used one serrano which I didn’t think was spicy enough so I added a red Thai chile for an extra kick.

Step 9. Put it all together

Place the rice noodles in individual serving bowls, followed by the raw beef, and pour in the hot broth to cook the beef. Add additional fish sauce, the herbs, green onions, and the garlic vinegar, to taste. 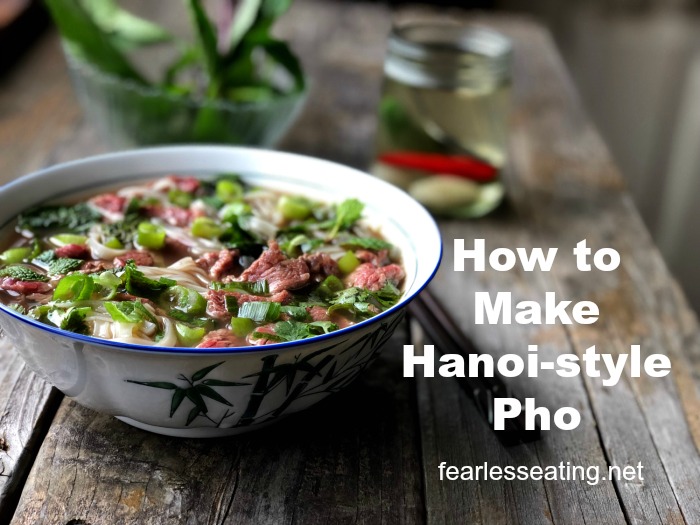 Hanoi pho features a savory beef broth with minimal use of garnishes and seasonings. It’s really all about the broth and many pho enthusiasts consider it the original and purist form of pho. It takes time to make the broth but it’s well worth it!

Garnishes and Seasonings, to taste 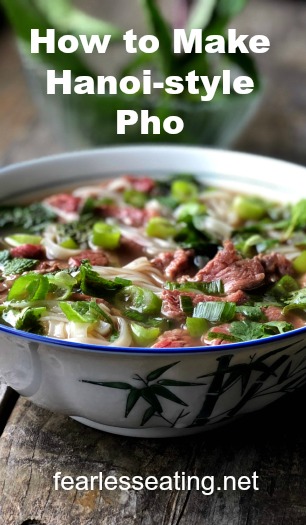 How to Make Chicken Pho