Of course, I don’t have ALL the New England cookbooks and of course, my list is entirely subjective. I’ve avoided some old-time New England cookbooks that, while fascinating and even influential, use a lot of ingredients (and language) that are not common today. Instead, I’ve focused on more modern cookbooks meant for today’s home cooks. If you have any that you also cherish, please share them in the comments below!

Yes, my latest soup cookbook, New England Soups from the Sea, is finally available! I could not be more excited to share it with the world. It contains 80 seafood soups from around New England. I promise you there’s a lot more to New England-area seafood soups than just creamy New England clam chowder.

The chowder chapter includes the 6 regional styles of New England clam chowder, as well as a wide variety of fish and shellfish chowders. There are also chapters on bisques, stews, broths and stocks, brothy soups, and clam boils.

It also includes information on how to support local fishermen (and fisherwomen), 39 profiles of local fish and shellfish, and how to avoid the global seafood trade that is damaging our oceans.

Click here to see New England Soups from the Sea.

A standout among the many seafood-themed New England cookbooks is Eventide: Recipes for Clambakes, Oysters, Lobster Rolls and More from a Modern Maine Seafood Shack.

Written by the owners and chefs of the famous Portland restaurant, this cookbook is beautifully photographed with chapters containing unique recipes for shellfish, clambakes and modern shack fare such as buttered lobster rolls and New England clam chowder.

The Provincetown Seafood Cookbook, by legendary chef Howard Mitcham, is one of the most entertaining but also important New England cookbooks ever written.

Recently updated with a moving foreword by the late, great Anthony Bourdain, it’s full of fascinating stories of the fishermen and seafood of Provincetown. Originally published in 1975 it captures its seafaring character before it became the vacation hot spot that it is today.

Homegrown: Cooking from my New England Roots, by chef Matt Jennings, is an awesome collection of traditional New England recipes with modern twists.

Though created by a skilled chef, all of the recipes are meant for home cooks, with easy-to-follow instructions.

Some of my favorites include: Maple-Lime Grilled Chicken, Legs, Farmstead Mac and Cheese, Beer-Steamed Littleneck Clams with Chorizo Verde and the Northern Carbonara Spaghetti with Razor Clams and Salt Pork.

Each recipe comes from a specific Connecticut restaurant or food producer while also highlighting their commitment to sustainability and quality.

What I love most about this New England cookbook is that the recipes come with context, stories and beautiful photographs. Many also highlight local farms and fisheries.

Some of my favorite recipes include Creamy Oyster Stew with Fennel, Spiced Skate Wing, Sweet Corn, Bacon and Crab and Chowder, Toasted Orzo with Spinach, and Chorizo and Maple Brined Pork Rack with Apple and Leeks.

Clam shacks are an iconic part of coastal New England culture. There’s nothing I love more than an unpretentious seaside setting and fresh local seafood.

The New England Clam Shack Cookbook, by Brooke Dojny, captures the spirit of these places with wonderful features of the people who own and operate them.

The New England Open House Cookbook, by Sarah Leah Chase, has a little bit of everything. There’s a nice mix of recipes from coastal areas like Connecticut and Cape Cod to more inland areas, like the mountains of Vermont.

There’s a dish for almost any time of the year, holiday, or special occasion.

The recipes are not overly chef-y and many include great little stories, anecdotes and historical tidbits.

If you don’t love seafood, this is the New England cookbook for you!

The Berkshires Farm to Table Cookbook focuses on the passionate farmers and chefs of inland western Massachusetts.

It’s a wonderful testament to the growing locavore movement.

The Coastal Table, by Karen J. Covey, focuses on a very specific are of New England, namely the south coast of Massachusetts and coastal Rhode Island.

This is a really unique area steeped in seafaring history and of course, incredible seafood. But it’s also a rich and vibrant agricultural area with many farms and farm stands dotting the landscape.

Karen captures the spirit and essence of this unique part of New England with dozens of recipes inspired by the many local farms and fishermen. 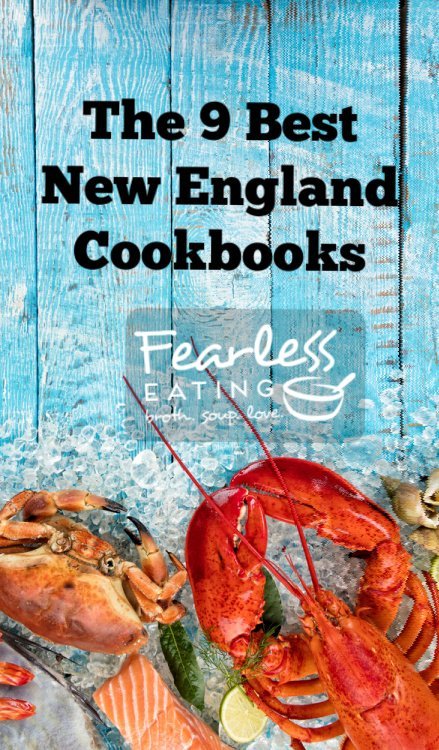