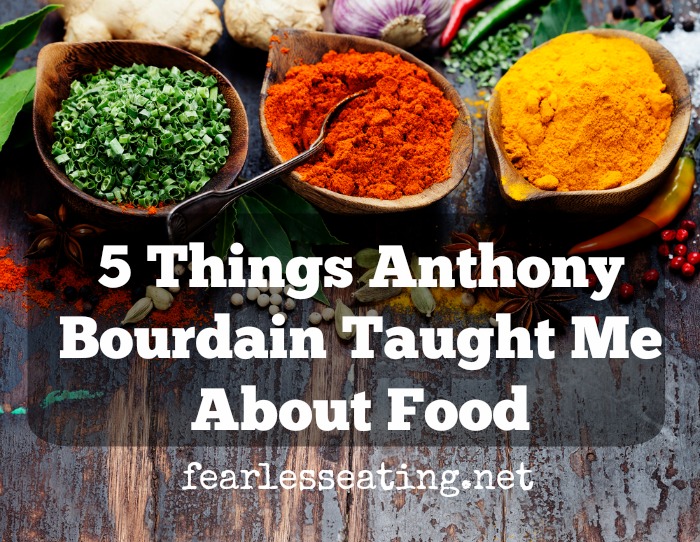 I couldn’t believe the news on the morning of June 8th.

I had a meeting with a friend when I saw it all over my Facebook feed so I couldn’t quite fully process it beyond the immediate shock.

But afterwards, when I saw the outpouring of love on social media, it hit me harder than I thought.

I never realized just how many people Anthony Bourdain touched (and I’m sure he didn’t fully realize it either). Sure, when celebrities die tributes are a part of that, but this one seemed to hit a nerve with people in a way that I can’t ever remember.

I think almost everyone harbored a secret desire to be Anthony Bourdain.

I mean who wouldn’t want to travel and eat all over the world and get paid well to do it?!

But it was the way he did it that made him so unique and popular. He had a rawness that he didn’t try to hide for the cameras. He smoked, he drank, he had tattoos, he loved punk music and he talked openly of his personal demons. But he was down to earth, painfully funny and of course, his knowledge, love and passion for food was just infectious.

Which makes it harder to process why he would take his own life.

We can never know the pain other people carry inside (and we all have it to varying degrees), but when I heard the news, I had a thought that perhaps all the travel may have been a part of it.

Maybe his persona as a world traveler, the popularity of his show, and the lives that were dependent on it (film crews, editors, writers, etc.) made him feel trapped by travel.

I read that he traveled over 250 days a year filming for his show. I can’t even imagine it. When I went to Cambodia in the winter of 2017 part of that journey was to explore the possibility of turning this blog into a full-time travel blog.

I got my answer real quick:

No way could I do it. I would’ve gone crazy. It’s just too much stimulation and it didn’t feel healthy or normal to me. In short spurts, sure, travel is great and I intend on doing a lot more of it in the future. But I hit a wall somewhere around the 6 week point in a trip. I’m cooked after that and I crave the familiarity of home – like traffic that is sane, like not being asked if I need a tuk tuk (a three-wheeled taxi) about 10,000 times per day, like New England forests, local coffee shops, walks with the dog and my own bed.

In the aftermath of Bourdain’s death, she wrote…

“Most travel influencers will tell you to seize the moment, move, explore, discover, experience it all. That’s also beautiful and yes I agree, but in honor of the delicacy of your nervous system, in honor of the child within you who may have been perpetually rushed and pressured her or his whole life, in honor of the ego who never thinks you are good enough, I say slow down.

Whether you’re traveling or not, be forgiving and patient with yourself. Explore your inner world to discover all the places where it hurts. Find the war that’s going on within. Become an aid in your own inner crisis. Rediscover the favorite hidden secrets spots inside you. Learn to love yourself so fully that you live in paradise everywhere you go.

That is the adventure. Love. The only one here to save us.”

Again, I have no idea what compelled Bourdain to end things. Whatever his reasons, I’m eternally grateful for the time he spent here on Earth. He taught us all so much about food – to be curious, to expand your taste buds, to support local food businesses, and especially, to appreciate the people behind it.

Anyone who watched his food travels shows surely learned something.

And if you want to share your thoughts or anything he taught you, well, I’d love to hear it. Please share in the comments at the end of this post.

Since I started this food blog and started writing books about broth and soup I’ve had many friends say I should start a restaurant.

And no one has ever written about it better than Anthony Bourdain.

Whenever I momentarily lose my sanity and think to myself, “Yes, a little cafe featuring soups from all over the world would be great,” I think of Kitchen Confidential.

Like many people, my first exposure to Bourdain was his epic book, Kitchen Confidential: Adventures in the Culinary Underbelly, that exposed the ugly truth of what goes on behind the scenes in most restaurants – the long hours in hot, crowded conditions, the chronic pain (especially in the feet, back, hips and knees), the manic fast pace, the verbal abuse, the alcohol abuse, the hard drug abuse, the lousy pay and the crazy cast of societal misfits that come and go faster than the seasons.

I’ve worked in restaurants all over the US – New York, Virginia, DC, Alaska and here in Massachusetts and as anyone who’s ever worked in a restaurant can tell you, that book was spot on.

The experience working in my last restaurant gig was so horrific thanks to the verbally abusive manager that I said to myself, “That’s it. I’m not putting up with this shit anymore.”

That said I’ve also worked in some restaurants that were well run, with chefs that weren’t angry all the time, restaurant managers that were not abusive and people that seemed to be fairly well adjusted. But they were few and far between.

If you’ve never read Kitchen Confidential, even if you’ve never worked in a restaurant, do it. Put it on your Amazon wishlist or just go buy it NOW.  Because although it will shock and horrify you and make you think twice about going out to eat ever again, it will also make you cry with tears of laughter. It isn’t just funny, it’s brilliantly funny and incredibly entertaining.

I promise you’ll love it.

Especially if you can do it as well as Bourdain did it. He wasn’t just a good writer, he was a GREAT writer. He had an almost Kerouacian stream of consciousness style of writing that was as frenetic and inspired as it was funny.

Like the time he interviewed for a head chef position in New York City with a big Mafia-esque looking restaurant owner who kept asking him in a quiet, hard-to-understand hushed voice, “So what do you know about me?”

To which he kept replying, “nothing,” only to realize later that what the owner was really saying was, “So what do you know about meat?”

Needless to say, he did not get the job.

I’ll never be as good a writer as Anthony Bourdain but like all great writers do, they inspire you to write yourself, to find your own voice and do it for the love of it.

Anthony Bourdain is one of many people in my life who’ve inspired me to do this writing thing and make a living out of it, no matter the consequences.

Sure beats working in a restaurant.

Kitchen Confidential may have launched his stardom but his travel shows cemented it.

As far as I’m concerned, there’s no better way to experience a place than to eat the local food. There are so many hidden gems that will reveal themselves to you. Bourdain had a gift for digging them out and exposing them in all their unrefined beauty.

When you travel for food it enriches your understanding of people, cultures, agriculture, history, economics, even politics.

There’s stories in everything you eat. Stories of blood, sweat, tears and laughter. When you uncover those stories, it connects you, even for a brief time, with the place you’ve traveled to. You become less of a tourist and more of a traveler. The former seeks a temporary escape while the latter seeks to be changed from the experience.

Anthony Bourdain inspired me to travel for food and find those gems.

I’d always pre-judge an episode of No Reservations or Parts Unknown based on the location. Somewhere in the US? He’d make it interesting. Somewhere in Europe? It would be cool for sure. But the episodes in southeast Asia were must watch television for me.

I loved how much Bourdain loved southeast Asia. I always thought he seemed a little freer, a little funnier, a little more relaxed when he was there.  And I loved how he captured the spirit of it all – the crazy markets, the insane traffic, the sights, sounds and colors. I wanted so bad to teleport myself through my TV when he was eating some unbelievable noodle soup with all those quintessential southeast Asian salty, sour, sweet and spicy flavors.

5. Southeast Asian Soups are the Best Food in the World

As I wrote in my book, Fearless Broths and Soups, it was a type of Buddhist meditation that inspired me to travel to Myanmar many years ago. But it was a traditional noodle soup known as mohinga that would be my primary reason for returning, should I ever go back.

The main reason I’d travel to the opposite side of the world is for soup.

I promise you I’m not exaggerating.

If that sounds a little overdramatic, well, let me give you one of my favorite Bourdain moments…

To me, that’s Anthony Bourdain in a nutshell – the humor, the rawness, the passion, the thrill of anticipation for that bowl of pho.

In closing, here’s one of my favorite Bourdain quotes from the book, Soup for Syria, and one that is exceedingly apropos in light of his death…

“Soup is elemental, and it always makes sense, even when the world around us fails to.”

Wherever you are Anthony, I thank you for making the world a better place and teaching us all so much about food. 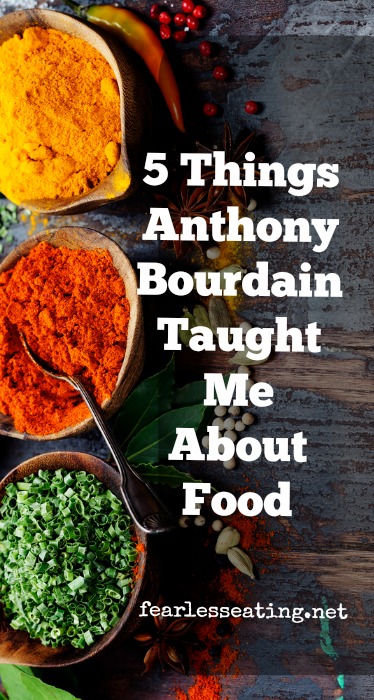