Of all the fermented sodas I’ve made, this homemade cream soda recipe is the simplest of them all. Besides sugar, water, and a starter culture, all you need is one simple ingredient.

Or if you really want to be a purist, you can use real vanilla beans instead.

Either way, vanilla is what makes cream soda taste so good.

I’ve had this fascination with making Lacto-fermented sodas for a few years now. There’s still a part of me that is absolutely amazed that you can actually make healthy versions of soda at home.  I know, it’s weird to even say “healthy” and “soda” in the same sentence.

But it’s true.  My first fermented soda post, a Lacto-fermented blueberry soda, discusses some of the health benefits.

Another reason I enjoy making them is that they are ridiculously easy.  Of all the things I ferment in my kitchen, sodas are the least time-intensive.

Since I’d never made a homemade cream soda recipe before, I decided to try both vanilla extract AND vanilla beans in separate batches and compare the taste.  I also used them together in a few batches as well.

I also used a few different starter cultures to see how that impacted the final flavor too.  Previously, I’d only used whey for a starter culture but this time I also used a ginger bug and champagne yeast (where and how to make them are discussed below).

And finally, I included a little lemon juice in one batch because I’d read from a few sources that it enhances both the flavor and creaminess.

So I simmered about 6 quarts of water, dissolved the sugar, then added the sugar water to five different quart-sized mason jars, then added different combos of ingredients, and let them ferment at room temperature for about 4 days.

Here’s the different combos I tried:

After four days I bottled them in soda bottles (as seen in the cover pic) and let them ferment and carbonate for a few days longer at room temperature.

Hands down, my favorite cream soda recipe was batch 2 which was the one that used the ginger bug.  In fact, it wasn’t even close. It had a bright, crisp wonderful vanilla flavor that tasted like, well… cream soda.

The silver medal went to batch 1, which used the champagne yeast.  It did taste a little yeasty to me, which isn’t necessarily a bad thing, and not something I may have noticed had I not compared it to other batches.  But the flavor wasn’t quite as rounded and full compared to the ginger bug batch.  But it was definitely drinkable.

It was also the fizziest.  It carbonated MUCH FASTER than the other batches.  And that’s actually something you have to be careful about (explained below).

The batches that used whey were my least favorite, which surprised me, especially because in two of those batches I combined a vanilla bean AND a tablespoon of vanilla extract. I figured they’d both be packed with vanilla flavor, which is the essence of a good homemade cream soda.  But they weren’t any more pronounced in flavor compared to the batches that used just vanilla extract or a vanilla bean.

I don’t know for sure why this happened but I’m going to guess that it’s because the whey is flavorless. The previous sodas I made were all fruit sodas and probably had enough flavor from the fruit itself.  In the case of a fermented homemade cream soda, perhaps the vanilla and sugar needed a slight flavor boost from the ginger bug to really make it work.  I can’t say for sure!

As far as the one batch that used lemon juice, it was god awful.  It gave the soda an off-tasting citrus flavor. I later read that lemon zest is better to use than lemon juice for this very reason and it’s the oils in the lemon peel that create the enhanced creaminess.

You live, you learn.  That’s fermentation in a nutshell.

Next time I’ll try the lemon zest instead. If you try it, please comment below and let me know how it turned out.

Finally, I was also surprised that the batches that used just the vanilla bean didn’t taste any better than the ones that used vanilla extract.  Was there something else I did wrong here?  Probably but I haven’t quite figured it out yet. Nevertheless, if you want to try using a vanilla bean, here’s a great video on how to split and seed a vanilla bean.

Now all of this is not to say that this is exactly how you should do it. Fermentation is an inexact science. That’s the beauty of it.  You can’t control all the conditions to give the exact same outcome every time. That’s one of the many reasons you’ll never see fermented cream soda (or any fermented soda) in stores.

Slightly different ingredient amounts, room temperature variations (things ferment faster in warm weather compared to cool), and variations in the micro-organisms in each starter culture will affect the final flavor.

The bottom line is to experiment for yourself and have fun with it!

Making whey or using champagne yeast is certainly quicker and easier. Here’s how to make whey.  And champagne yeast comes ready to go in little packets.  Here’s a good source.

You could also use water kefir and I’ve heard of some people using the juice from fermented vegetables like pickles and sauerkraut.

One other super important thing before I get to the recipe…

That goes for any Lacto-fermented soda, be it a homemade cream soda recipe or not.

As opposed to conventional sodas (which manually add carbonation), carbon dioxide is a natural byproduct of the Lacto-fermentation process.  Soda bottles can rapidly increase in carbonation, and thus pressure inside the bottle, especially in warmer weather.

When you transfer the soda to the soda bottles, be sure to open them every day to release the buildup of carbon dioxide. You shouldn’t have to let them sit too long to carbonate well. Sometimes it only takes one day.

How I Learned the Hard Way

I made a batch of root beer last fall.  For some reason, it didn’t ferment well.  I opened the bottles every day for a week, then every other day for a few more weeks after that.  Nothing. No fizz. No signs of fermentation at all. Maybe it was because of the cooler fall weather. I’m not sure.

And then, I totally forgot about the bottles for a few weeks because I figured they were dead. I left them capped in the kitchen.

Because they weren’t dead at all.

This is what happened…

My roommate, who was home at the time, said it sounded like a bomb went off.

There was glass EVERYWHERE.

Luckily, no one was in the kitchen when the bottle exploded, otherwise, someone could’ve been injured. I’ve heard of this happening to others.

So never leave anything fermenting in soda bottles at room temperature for too long.

Another mistake I made was that I used a type of soda bottle that is notorious for exploding. I didn’t know it at that time but needless to say, I no longer use them.  You can see in the photo above that the bottle that didn’t explode has a square shape in the body of the bottle (below the neck).  Don’t get those.

I now use these, which have a round shape, and which are supposedly better built to handle increased pressure:

You can find them here on Amazon.

You could also use plastic bottles too.  Personally, I don’t like to use plastic but I know some people who do just to be on the safe side.

Another option if you’re going to use glass bottles is to also use one small plastic bottle as a gauge of pressure.  As pressure builds, the plastic will expand and you can feel the increased pressure when you squeeze the bottle. This will help you know when to open the glass bottles to let the pressure out.

OK, finally the cream soda recipe! Check out the links below the recipe for additional types of fermented sodas. 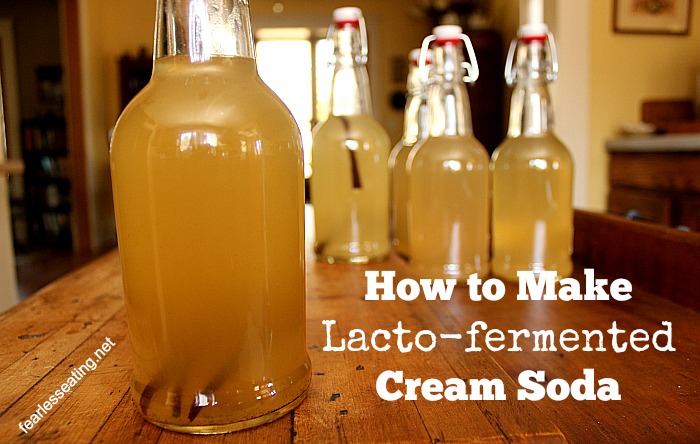 Fermented cream soda is the easiest fermented soda to make at home! All you need is water, sugar and vanilla beans or vanilla extract. 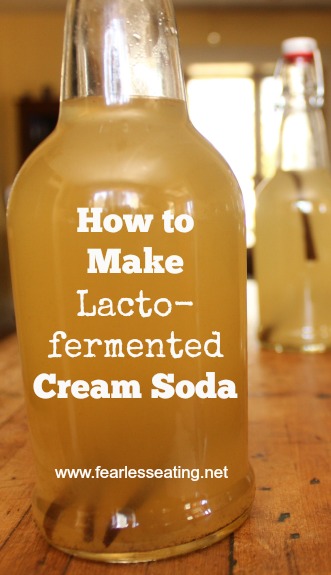 How to Make Fermented Mango Soda