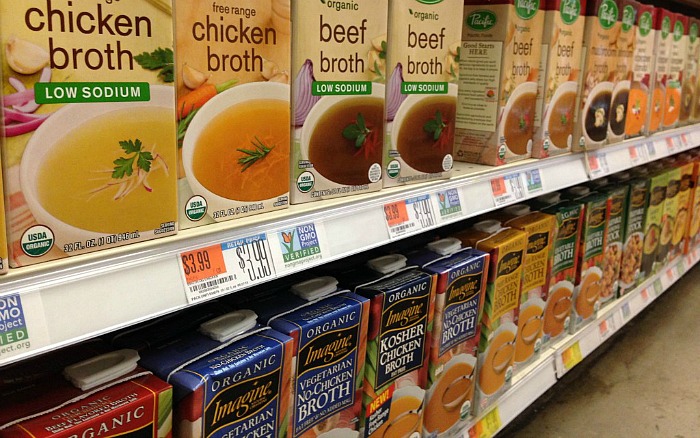 If you follow my blog you might be surprised to hear that I sometimes recommend store-bought broth.

When I work with my nutritional therapy clients, I try to get them to make their own homemade bone broth.  I explain the health benefits, give them handouts for how to make them and even share my video for how to make chicken and beef broth.

The reality though is that not everyone is ready for this.  As easy as it is for some, it can be very overwhelming for others.

A recent client in her 40s had never cooked a thing in her entire life.  Her entire diet consisted of cold foods, even in the middle of winter, and she wondered why she felt so sluggish. The first week I instructed her to get in the habit of cooking her oatmeal… instead of eating it cold.  And cooking a few eggs. And having some soups.

But I knew I had to use store-bought broth as a crutch until she was ready to make her own.

Now until recently, there wasn’t a single store-bought broth I could enthusiastically recommend.  Not even the organic ones.

The Problem with Store-Bought Broth

And that’s because virtually all store-bought broth uses added flavorings.

The worst brands use MSG (monosodium glutamate) and other chemical flavorings such as the ubiquitous “natural flavors,” which means flavors created in labs.

But the organic ones aren’t much better.  They also heavily rely on flavorings.   The more common ones you’ll see are “natural chicken flavor,” “natural beef flavor,” and “yeast extract.”

Natural chicken and beef flavor are not natural at all.  Again, they’re derived in labs, and they’re standard flavor enhancers in the organic store-bought broth industry.

Yeast extract is derived from an industrial process that removes the cell walls of yeast to extract the contents.

Well, it actually does taste good!  That’s why it’s in so many processed foods.  Similar to MSG, it has an umami/meaty taste.  In fact, yeast extract contains the free glutamic acids in MSG that can cause adverse reactions in the nervous system and brain.

Now it’s very controversial whether or not these free glutamic acids (which occur naturally in Nature) are concentrated enough in the flavorings of processed foods to cause harm to the body.

But what’s not controversial is that yeast extract is a flavor enhancer.

And that’s because store-bought broth is not real broth.

To help you understand why store-bought broth is not real broth, I’ve come up with a simple formula to explain it.

Real bone broths need time to develop flavor. The longer you simmer bones, the more nutrients that leach out and thus, the more flavor.  Additions of real herbs, real spices and real vegetables like carrots, onions and celery will also add more flavor.

Store-bought broth companies certainly don’t simmer bones for very long, if at all.  And you’ll often see things like “onion powder” or “carrot puree” or “celery juice concentrate” instead of actual herbs and vegetables.

Second, a good broth will contain good quality bones. The better the diet and treatment of animals, the healthier they are (duh!) and the more nutrients that leach out.

And finally, a good bone broth uses not just bones but a variety of other collagen-rich animal parts that impart valuable nutrients such as gelatin which, when a broth cools, gives it a jello-like consistency.  Gelatin is rich in amino acids that play important roles in digestion, joint health, skin health, detoxification and even sleep and mental health.

Store-bought broth is NEVER gelatinous, organic or not.

I did a survey of every boxed and canned broth I could find in three conventional supermarkets and three organic supermarkets.

I found a total of 20 companies (8 were organic) with a total of 50 different chicken and beef broth products.

There wasn’t a single on that didn’t use some form of flavoring.  And most of them were using multiple flavorings.

Recently I discovered that Pacific brand broths released a new line of broths without any flavorings.  I was almost shocked when I saw the ingredients label.  So shocked that I was also suspicious.  So I reached out to the company with some questions.

As public awareness of the value of real bone broth grows, I believe (and hope) more companies will be striving to do this in the future.  But at this point, Pacific is the only store-bought broth company that has eliminated them in at least some of their products.

But I wasn’t finished with my questions.  In particular, I wanted to know how well they were adhering to my formula for developing real natural flavors.

They assured me that their new products are simmered for at least 12 hours.

All the poultry is pasture-raised on certified organic feed (which I was told is inherently non-GMO, though the feed is not non-GMO Project verified) and it comes from organic farms in the US, with an emphasis on local/regional when possible.

And they even told me that they’re now including bones with collagen and connective tissue for a more nutrient-rich and thicker product.  As a result they contain more protein, calcium and iron than their previous products.

If you’re not quite ready to make homemade broths or you just need a ready-made broth when you’re in a pinch (and who’s not guilty of that sometimes?), this is certainly the best quality product I can recommend in stores.

Where to Find Pacific’s New Line of Broths

Many of them are now in your local health food stores.

The new broths, both chicken and turkey, are labeled as, “traditional sipping broths made from organic bones” and come in both 32 ounce and 8 ounce containers, both BPA-free.

I hate to admit that a store-bought broth could be as good as something I could make at home, but these came real close.  The additions of ginger and lemongrass, two of my favorite REAL flavor enhancers in soups, worked beautifully.

If you can’t find them in local stores, you can find them online.  Just click the images or links below to see them on Amazon. 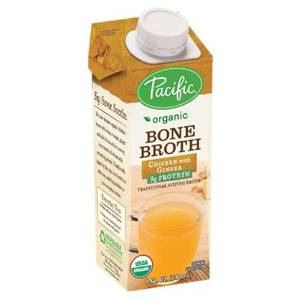 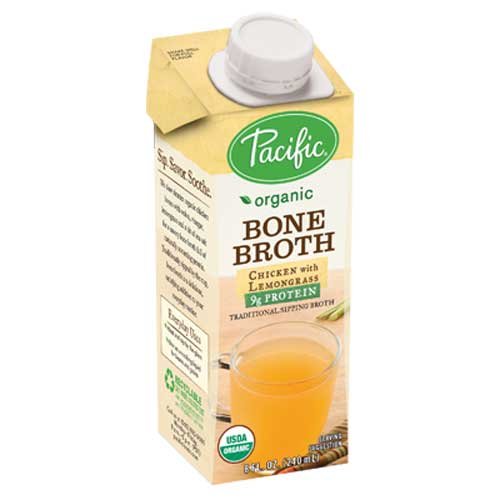 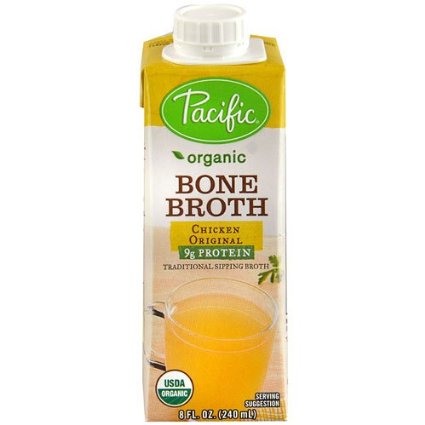 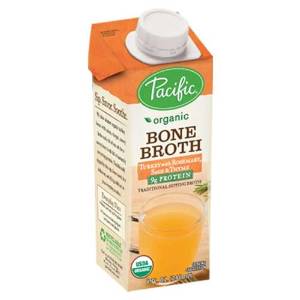 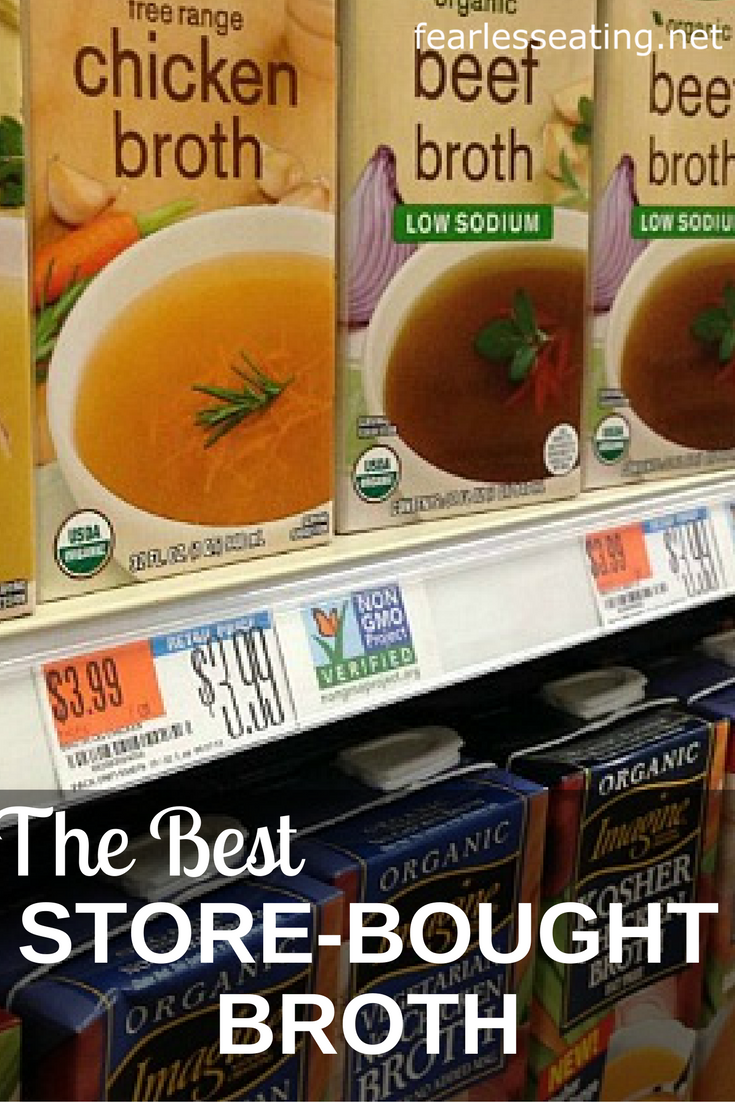