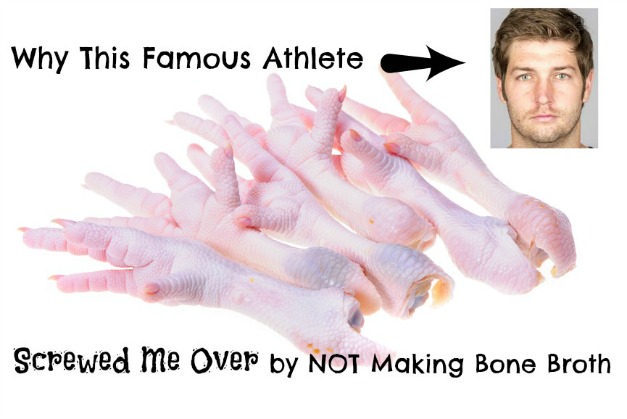 If there’s one day I don’t mind getting snowed in, it’s on a Sunday in mid-December.  It’s the perfect excuse to watch football all day and not feel guilty about it.

However, that’s not the case today.  Despite eight inches of snow here in western MA today, I have very little interest in watching any football today.

And I blame Jay Cutler, the quarterback for the Chicago Bears, for not making bone broth.

A month ago I was at the annual Weston Price conference in Atlanta and I was sitting at a table with some fellow real food bloggers.  One of those bloggers was Tamara Mannelly.  Along with her blogging partner, Kelly Liston, they run the fantastic traditional food blog, Oh Lardy!  This is one of my favorite blogs out there with lots of recipes for fermented foods and bone broths.  Check’ em out over at Oh Lardy’s Real Food blog and be sure to follow their Facebook page as well.

So I’m chatting with Tamara and I come to find out that she’s married to the long snapper for the Chicago Bears, Patrick Mannelly.  Being a huge football fan myself, we start talking football.

Now Jay Cutler had just been injured the previous week so I told her what a bummer that must be for the Bears.  He was having a fantastic season up to that point.   I also mentioned that Jay Cutler was on my fantasy football team so I was also bummed out about it.  She mentioned that she knew Jay and his wife and that was that.

A few days after the conference, Tamara emails me this message:

“Since you are a football fan, and have Jay Cutler on your fantasy team, you might enjoy this. Since he is injured again and doing anything he can to speed healing, his wife emailed me about bone broth. I gave her the low down on how to make it and where they could order it from.  So…today, my husband brought in 2 big bags of frozen chicken feet to give to him at practice. I am laughing thinking about how that might be the first time chicken feet were exchanged in the locker room!”

I was psyched to hear this and had a blog all ready to go in my head.  It was going to be called, “Why Jay Cutler Will Lead Me to Fantasy Football Glory.”

It was going to be a fun blog about the power of bone broths to speed the healing process.  I was certain he’d be back within a few weeks and lead my team to the glory land of a fantasy football championship. In fact, reports were surfacing that Cutler was making good progress and would be back soon.

Why Jay Cutler screwed me over

But CLEARLY Jay Cutler clearly never made bone broth.   Because he missed the next four weeks!   And boy did he screw me over.

Last week was the first week of fantasy football playoffs.  I made it in both of my leagues.

In a cruel twist of fate, my QB replacement for Cutler had to play in a blizzard which destroyed any hopes of passing the ball effectively.  He put up a pathetic stat line and I lost in my high school league.

And in a crueler twist of fate, his back up, Josh McCown, had a monster game, totaling 5 TDs and 350 yards passing.  My opponent in my college league had Josh McCown.  Needless to say, I was spanked out of that league as well.

Cutler plays and I probably win both.  To add insult to injury, this week came the announcement that Jay Cutler is finally returning from his injury.

DAMN YOU FOR NOT MAKING BONE BROTH!!

Why Jay Cutler did not make bone broth

Of course, I’m just having fun.  I don’t know if Jay Cutler made bone broth or not.

But if he didn’t, I think I know why.

As a Nutritional Therapist, I teach people how to make bone broths.  They are a staple of traditional foods and have myriad health benefits.

But not everyone embraces making bone broths right away.

After all, few people grew up making them from scratch.   So when people learn how to make a bone broth and that they have to save bones, find bones, simmer bones for long periods and strain bones from a goopy, often smelly cauldron of animal parts, many find it a little intimidating if not completely gross.

I can’t imagine handing someone who’s never made a broth an entire bag of chicken feet.  Most people I know would freak out!

So if you’re new to it, just start simple.  The place to start is with a basic chicken broth.  And you don’t even have to use chicken feet!  Yes, they’re great to use and will add gelatin to your broth but they’re not absolutely necessary.   Just go get a good quality, whole chicken.

And then click here to read this simple tutorial for how to make chicken broth (with some great pictures) from Tamara!

Some people you just have to wave the white flag.  They’re just not gonna make bone broths no matter how much you explain the benefits and how easy it is to make them.  I’ve had a few clients like this.

If this sounds like you, that’s OK.  Just go for the next best thing.  What I recommend is to supplement with some powdered gelatin.

Gelatin is one of the many benefits of making bone broths.  It’s the waxy substance that forms when broths cool.  I shot a little video of this a few weeks ago so you can get a good visual.

You can also just think of Jello!  Gelatin is what gives it its characteristic jiggle.

Gelatin benefits our hair, skin, nails, joints and bone health, digestive system and immunity.  It’s high in several amino acids, but two in particular, proline and glycine, have profound anti-inflammatory effects on the body. This anti-stress effects can also help promote a good night’s sleep!  I can personally attest to this.  Any time I have a broth-based soup for dinner I always sleep so much better.

The company I recommend is Great Lakes Gelatin.   They make a great gelatin powder from grass-fed animals. 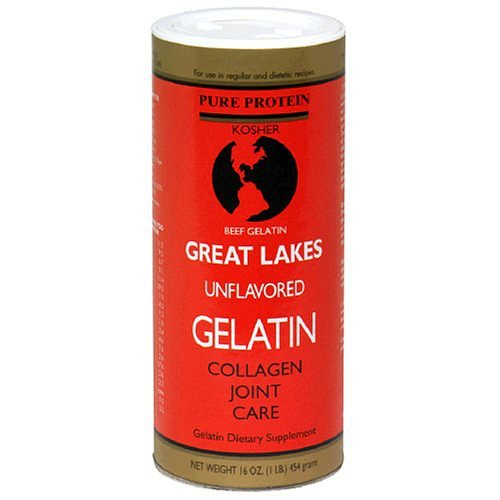 There’s two types they make.  The first is regular gelatin powder (pictured above).   You have to dissolve it in warm water.  A good way to take it is to add a tablespoon to coffee or better yet, tea.  It’s unflavored so you don’t even taste it.  You also add it to soups, stews, gravies and things like hot cereals.

You can find Great Lakes Gelatin here on Amazon.

The other type is collagen hydrolysate which is broken down more in the processing and can thus be easier to digest for those with digestive problems.   It also doesn’t need to be dissolved in hot water and can be easier to use as a supplement.  If you have digestive issues, I’d start with the collagen hydrolysate and start slow.   Start with a half of a tablespoon and add a half tablespoon each week until you’re taking anywhere from 2-3 tablespoons per day.  Along with hot beverages you can also mix it in things like juices, smoothies and yogurt.

You can find Great Lakes Collagen Hydrolysate here on Amazon.

Now I’d like to hear from you!  Do you have a fear of making bone broths?  If not, what types of bone broths do you make?  Any tips you can share to encourage those that feel a bit queasy about making it? 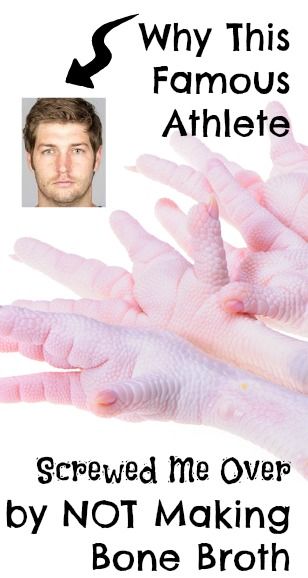 Fearless Eating may receive commissions from purchases made through links in this article. As an Amazon Associate I earn from qualifying purchases. More info here.
Pin156
Share74
Yum
Tweet
Follow