Why the Best Meal I Ever Had Was at Pizza Hut 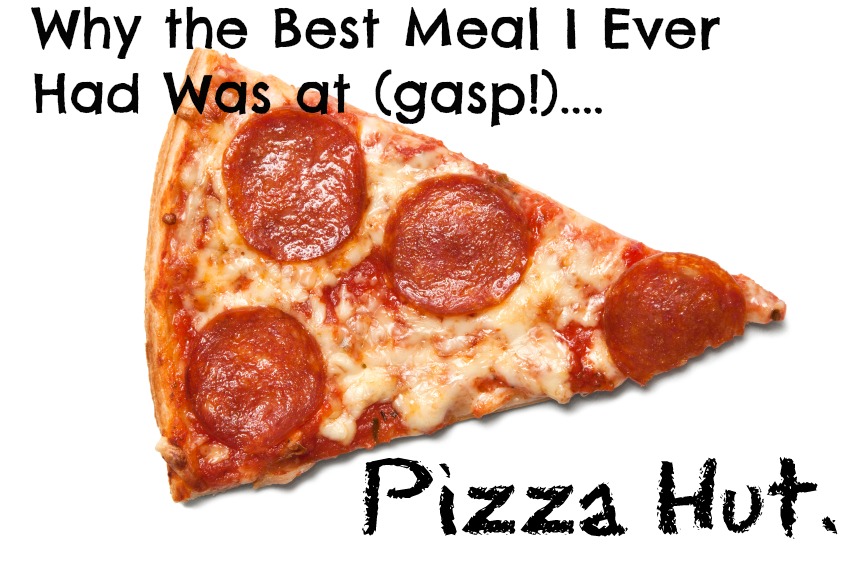 The year was 2000.  I was in Thailand.  I’d spent the previous two weeks in Bangkok and Chang Mai and I wanted to escape the tourists, the crazy traffic and the smog.  So I made my way to Chang Rai, a small city way up north, where I rented a moped and embarked upon a four-day trip exploring the beautiful mountains and countryside of northern Thailand.

I’ll never forget the first day on the moped.  I had to practice on some side streets before venturing into the heavily trafficked main roads.  To accelerate I had to pull back on the right handlebar.  Easy enough.  However, when I was a kid I had a little Quinn bike where pulling back on the handlebar meant STOP.   Even after all those years, my brain still subconsciously equated pulling back with braking.   You can guess what happened next.

After about ten minutes of practicing and feeling comfortable, I approached a curb and went to put on the brakes.  I pulled back on the handlebar.

Before I knew what happening, I was flying over the curb, plowing through a pile of trash and crashing into the side of a house.

The thud of the collision resonated like a thunderclap down the quiet side street.   Residents started coming out of their houses to see what happened.

Somehow I was OK.   There was a metal basket on the front of the bike that cushioned the blow.  The only damage was a dented basket and crack on the plastic guard that protected the front wheel.  Cost me about $20 when I returned the bike four days later.

But I digress.  Back to the point of my story.

The four-day journey was absolutely fantastic and one of the highlights of my trip.

Except for one day.  A day I will never forget.

On the last day I’d planned a half day trip up this mountain just outside of Chang Rai.  I had a  map that looked more like a first grade art project than an actual map.  I should’ve known better.

To make a long story short, I got horribly lost.  The paved road turned into a treacherous dirt road which was totally unfit for my crappy moped.  I came oh-so-close to getting stranded in mud on a few occasions.  There were other times I had to get off the moped and walk it through dangerously steep curves.

As I kept going, off in the distance I’d occasionally see the brown thatched rooves of a traditional hilltribe village set amidst the heavily forested mountainsides.

As it got later and later in the day I thought I might have to find my way in and try to communicate to someone that I was lost.

I had thoughts of being tied up over a fire pit as scantily clad natives danced around me with spears while offering me up as a sacrifice to their gods.

I know that’s a horribly stereotypical thing to say but I guess that’s what happens when you grow up watching movies like Indiana Jones.

Ironically, a few days later I’d be sleeping in one of these hilltribe villages on purpose.

Thousands of westerners embark on guided treks throughout the hills of northern Thailand every year.   For better or worse, tourists bring money and in return the villagers offer a taste of their traditional lifestyle for a few nights.   On my trek the villagers were kind and generous, cooking for us and showing us how they lived and survived.   It was a remarkable experience.

But I hadn’t had that experience yet and even if I had, I did not want to start venturing off into the forest on my own.

Thankfully, I did and I found my way out – twelve hours later, on the opposite side of the mountain and well after sunset.

By the time I made it back to my guest house in Chang Rai, I was absolutely exhausted and my nerves were shot to hell.

For whatever reason, Pizza Hut was one of the more common fast food chains in Thailand back then.   If you’re new to this blog, you should know that Pizza Hut is one of the last places on earth I’d ever promote or recommend.  And in my four months in Thailand I’m proud to say that I avoided it all costs.

Pizza Hut was a short walk from my guest house and it was exactly what I needed.

The cushy, padded booth felt like heaven.  I ordered a Coke and a pizza.  It was the only time in my life that I ate an entire pizza by myself.

It was the best meal I ever had.