Why Sugar Will Raise Your Blood Pressure More Than Salt 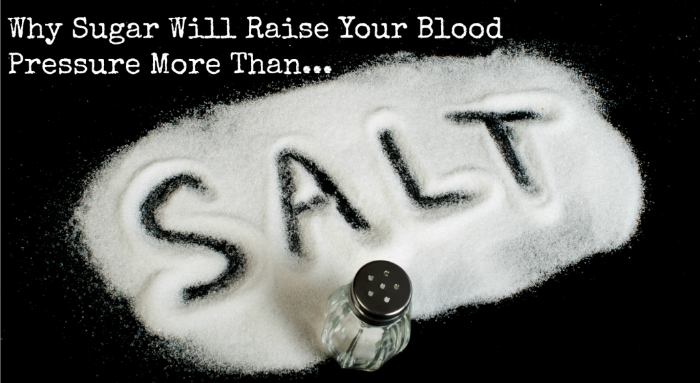 To salt or not to salt, that is the question.

According to your doctor, your government, just about every major health organization, and probably your mother (at least mine) salt will raise your blood pressure.  This thinking is so pervasive that it’s taken as a fact by just about everyone.

It also sells A LOT of drugs.

Contrary to popular belief, there is no connection to salt intake and high blood pressure.

I admit it. There is a connection.

But it’s not nearly as much as you think.

Let me explain why in a somewhat roundabout way.

As part of my nutrition practice I teach a 12 week group weight loss class.  Each week we discuss a different underlying cause of weight gain with steps to correct it.  Class members learn to address their digestive issues.  They learn to identify hidden food sensitivities.  They learn how to correct fatty acid deficiencies, hormonal imbalances, brain chemistry deficiencies and many others.

In week 1 we discuss the science of carbs.  We differentiate between good carbs and bad carbs and the different effects they have on our blood sugar levels.  We see how too many bad/refined carbs result in too much sugar in the blood which is dangerous and how the body then converts and stores sugar as fat as a defense mechanism.

We take a historical look at the evolution of the American diet in the 20th century and see the clear influence of industry with the rise of refined carbohydrates.  We see a clear connection to this trend and the rise of chronic diseases in industrialized countries.

We explore the bad science that has led to the idea that fat is bad.  We dismantle the myth that fat makes us fat and we learn how vital it is to our body’s functioning.  And we learn how fat and protein switch the body’s metabolism from fat storing to fat burning.

“Yeah yeah yeah, so what does this have to do with salt?!” you ask.

Generally speaking most class members lose the most weight in the first two weeks of the 12 week class.  But they’re not really losing fat.  They’re losing water.  Why?

Carbohydrates cause the body to hold on to water.  When the water volume increases in our blood, the pressure in our blood vessels increase.

The same can happen when we consume salt.

However, only one of these will cause chronically elevated blood pressure.  Let’s see which one is the true culprit.

Salt is composed mostly of sodium and chloride.  We can’t live without either.  Our blood, sweat and tears are salty.  Sodium and chloride play vital roles in nerve conduction, muscle contraction (including the heart), digestion and blood pressure, to name a few.

As with everything, our body regulates their concentrations so they don’t get too high or too low.

So when we consume salt, the blood pressure goes up slightly as the kidneys work to maintain the right concentration.  And vice versa.  This has given us the belief that reducing salt in our diet will lower our blood pressure.  Of course it does, but here’s the million dollar question:

And the answer is a resounding NO!

The History of Salt

Before the advent of refrigeration foods were preserved and cured in salt.  Contrary to popular belief salt has dramatically decreased in our diet since WWII.  In fact, ‘sal’ is Latin for the word salt. In Roman times, sal-ad was traditionally meant to be vegetables and salt or a salty dressing.  Similarly the word ‘salary’ also comes from the Latin ‘sal’ as Roman soldiers were paid in salt.

Go to the “history of salt” page on Wikipedia.  Here’s what the first sentence reads:  “Salt’s ability to preserve food was a foundation of civilization.”  If you read further, you’ll see that humans have gone to great lengths throughout history to secure salt.  Empires have risen and fallen due to salt trade routes and salt production.

Furthermore, salt’s use as a healing remedy dates back thousands of years.  Cultures throughout the world have found healing properties to salt water.  Could this possibly be a reason so many of us are drawn to the ocean?

In fact, salt is so vital to your health, that not getting enough can have adverse health consequences including an increase in your likelihood of hypertension and cardiovascular disease, the very conditions we’re told are related to too much salt.

Why Sugar Will Raise Your Blood Pressure More Than Salt

It seems like in everything I write, in all my public talks, in all my discussions about nutrition, I somehow find my way to this statistic:

The average American consumes 150 pounds of refined sugar per year.

We are so used to it in our diet that we don’t realize it’s relatively new historically speaking.  Prior to industrialization, making refined sugar from sugar cane was a long and laborious process.   The sugar industry was built on the back of the slave trade.  Initially, only wealthy Europeans could afford it. This is also the first evidence we see of diabetes.

With the advent of industrialization in the 19th century, industry took over for slave labor and made the manufacturing more efficient.  Throughout the 20th century, sugar became increasingly available to everyone as the food industry put it in everything.

We know that hypertension goes along with obesity, heart disease and diabetes, the so called diseases of civilization.

Again, too many refined carbohydrates increase water in the blood thus increasing blood pressure. Refined carbs have no nutrients. The nutrients are stripped out in the refining process.  As we’ve seen the body must maintain sodium in the bloodstream or significant health problems will ensue.  Consider that an intravenous solution of salt water is the first thing given to ER patients.

So if the body is not getting sodium through the diet it must retain it.  It will do this by retaining water in the blood vessels to maintain the concentration of sodium.  Thus, blood pressure rises and thus we get hypertension.

And this is why most people lose the most weight in the form of water in the first two weeks on carbohydrate-restricted diets.  This is exactly what happens in the weight loss program I teach.

This is just one of the many benefits that come with restricting sugar and processed carbohydrates.  For others cholesterol comes down, creaky joints feel better, mood improves and so on.

What About the Studies?

You would be surprised just how many studies exist that shows no connection to salt and hypertension. So forget the studies.  Study it in yourself.  If you have hypertension, reduce your salt intake for two weeks and do nothing else (you’re probably already doing this). See if that brings down your blood pressure significantly.  If not, eliminate all sugar intake in the form of refined sugar and refined carbs for two weeks.  See what happens.

Please note there are some medical conditions that are can be exacerbated by increased salt intake such as kidney failure and congestive heart failure.  Consult your doctor if you have a serious medical condition.

Of course not all salt is created equal.  Most Americans use processed salt which is stripped of trace minerals and full of anti-caking chemicals such as aluminum which make salt easier to sift.

God forbid we might have to use real salt that doesn’t come out of matching porcelain salt and pepper shakers.  Oh, the inconvenience.

Yes, Nature’s true salt, sea salt, forms clumps.  It is also offers a wonderful supply of trace minerals which the body needs for so many biochemical processes.

There are many healthy sources of sea salt in health food stores.   Many people have favorite brands for different reasons, in particular, Himalayan ses salt or Celtic sea salt.  But I like Redmond Real Salt which is mined from ancient sea beds in Utah. 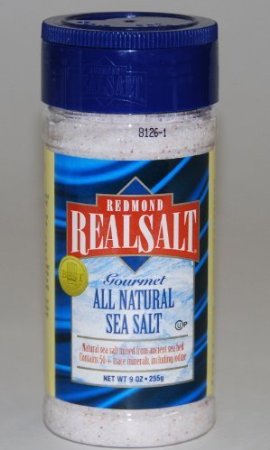 Finally, the last question I get from many people.

How much salt is too much salt?

Dr. David Brownstein, a holistic doctor who specializes in treating thyroid issues and the author of Salt Your Way to Health recommends at least a teaspoon per day of unrefined salt.

If you want to learn more on this subject then I’d highly recommend his fantastic book. 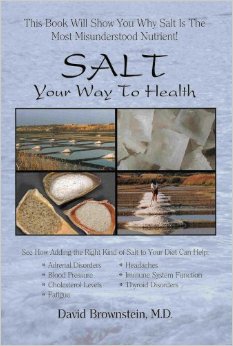 Click here to check out Salt Your Way to Health on Amazon.

Of course, don’t discount your innate intelligence!   Innate intelligence communicates to you through your taste buds.  If you’re craving salt, salt your food.  You’ll know when you’ve overdone it. 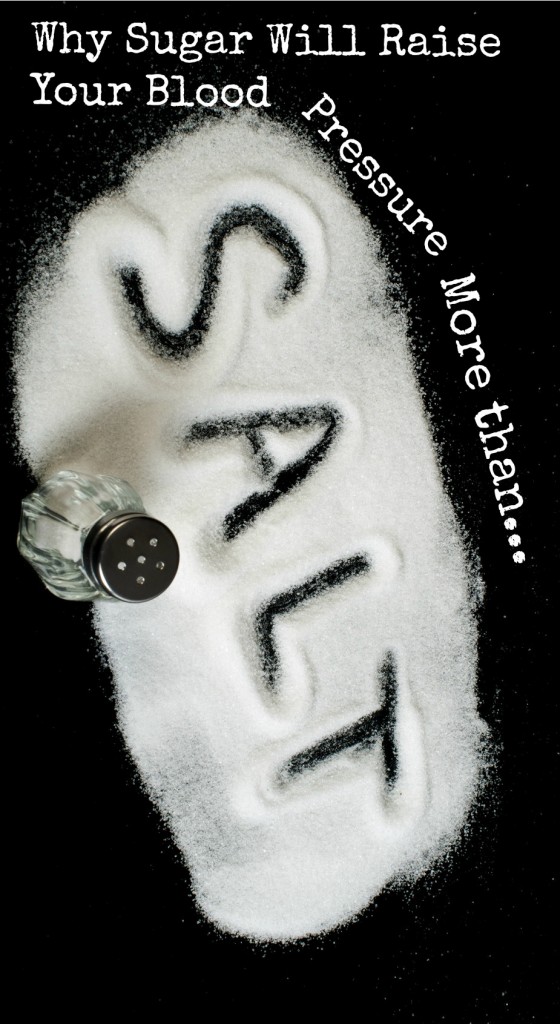 GET YOUR FREE GUIDE TODAY!

Learn how this ancient, simple food is a much healthier and safer option than drugs like acid blockers and antacids.
Includes 12 heartburn-busting recipes. Get it FREE today!

How to Prevent Tommy John Surgery with Bone Broth

Just say NO to reflux drugs and start addressing the REAL cause once and for all!

Long Island Clam Chowder: What It Is and How to Make It

Why and How to Make a Portuguese Squid Stew