Why Skim Milk Effed Me Up 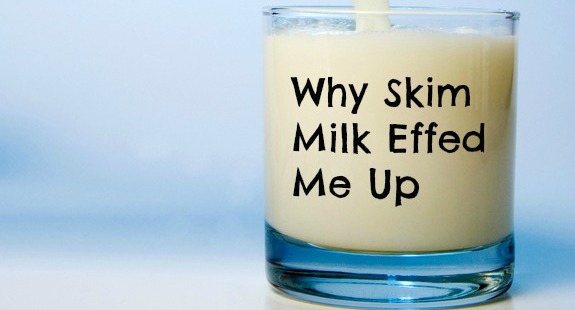 If you follow my blog you know that I have no fear of things like butter, bacon, eggs and whole, raw milk.  You could say I EAT A LOT of fat and protein.  I’ve never counted a calorie in my life.  A normal plate of food for me is what others would certainly call a “generous helping.”  My roommate is constantly amazed at how much I can eat.

But if you were to meet me in person, I guarantee the first thought that would go through your head.

And skinny is an understatement.

Let’s put it this way.  The last person I told what I weighed reacted with such shock that he actually accused me of being anorexic.  Swear to god.  It was a friend and he was genuinely concerned for my health and suggested I seek help.

THAT is how underweight I am.

But it’s ALWAYS been that way.  I could never gain an ounce no matter how much I ate.  For those of you who’d like to lose a few pounds, you don’t have to say it in the comments – I’d LOVE to take some off your hands (or maybe your stomach or hips).

As I got into my teenage years, of course I became more self-conscious about it.  So I started lifting weights.  To make a long story short, I gained about 20 pounds of muscle between my middle teenage years and early 20s.  However, there was a price to pay.  I overdid it at times, never paid attention to correct form and developed some debilitating back pain.

So I quit.  I started doing yoga and pretty soon after, the back pain was gone.  But it didn’t take long to lose the entire 20 pounds of muscle.  Within a year or so that was gone as well.

As I got into my late 20s, I got more into meditation and eastern spirituality and let’s just say that having a muscular physique didn’t seem to matter as much anymore.

But I can’t say I ever became fully free of caring about my appearance.  Living in image-conscious America, it’s almost impossible.

“Craig, you NEED to gain weight.”

“Craig, you are SO skinny dude.  Eat something.”

Regular comments like these have certainly kept me self-conscious about it through the years.  And of course, I see the looks on people faces even when they don’t say anything.  And I see myself in the mirror and can’t help but think the same thing.

“Damn Craig, you NEED to gain some weight,” I often say to myself.

Knowing full well that food will not do it for me no matter what or how much I eat, I have started lifting weights again in the past few years.  But it usually doesn’t last long.  I start.  I stop.  I start again.  Stop again.

These days, an hour spent walking the dog, outside, watching her run around and play with other dogs easily trumps an hour spent inside, in a dark basement, lifting weights by myself.

But the purpose of this post is not to expose all my silly insecurities around my appearance but rather to explore why I’ve inherited the body of what my college friend jokingly-but-not-so jokingly described as a “pre-pubescent member of the US women’s gymnastics team.”

So before I go any further, please don’t tell me that I just need to love my body as it is (unless you want me to vomit all over myself).  It makes my skin scrawl and it makes me think of this sorta stuff.

I’ll never forget this one day in health class during my senior year of high school.  The teacher, Mr. Anacreonte, was discussing different growth patterns in boys and girls and he was saying that some boys naturally develop later than others.  He used me as the obvious example of someone who had not developed as other boys in my class, but that I would in time.  Even though I’d been lifting weights for two years at that point to compensate (at least muscle-wise), I was still clearly in the “not fully developed” category.

It just never happened.   I never filled out.  I always just assumed it was genetics.  That is, until I came across the research of Dr. Weston Price and Dr. Francis Pottenger.

Dr. Price, in his travels around the earth in the 1930s, was one of the first to make the connection between poor nutrition and physical degeneration.  Populations on their native diet maintained robust health and a good indication of that was their bone structure, including their dental presentation.  Populations that started consuming the “foods of commerce” – white flour, white sugar, vegetable oils, etc. – showed more evidence of bone and dental problems.  Succeeding generations showed the most evidence of physical degeneration.

Though my family is small in stature, NOBODY on either side of my family has the thinness in bone structure that I do.  Well, except for one person – my sister.  Growing up in the 70s and 80s, we were the first generation that grew up almost 100% on processed food.

Cheerios, factory farm-raised animal products, junk food snack products, canned soups, junky luncheon meats and refined flour bakery products were the staples.  School lunches were an atrocity (as they still are today).  And I didn’t realize it until years later but I was an absolute sugar fiend.  I could probably write a thesis on the different flavors, textures and bubble gum-blowing potentialities (Bubbalicious was the best) of the chewing gum brands from the 1980s.  I was a total expert.

Of course, anyone age 40 or under would probably tell you similar things.  It’s just what we all grew up on.  At that time, few people knew better and NOBODY was going to farmers markets, buying grass fed meat, taking cod liver oil or making bone stocks.

Still, none of my friends were as thin as I was.

So when I look back, it’s hard for me to say why I stayed so thin when most kids around me seemed to develop some semblance of a normal bone structure.

But I have a theory.

Starting in the mid-1980’s I started drinking a tremendous amount of skim milk and I really mean tremendous.  Just like the rest of America, my family started buying into the Lipid Hypothesis, the theory (thus debunked) that fat and cholesterol cause heart disease, which started to gain mainstream acceptance at that time.  As I got into my teenage years, my skim milk consumption increased dramatically. I could down a quart of skim milk in one day without a problem if not more.  To this day, I really think it contributed to my growth and weight issues, or lack thereof.

The problem with skim milk

For starters, real milk is not skim milk.

Dr. Weston Price, in his travels around the earth in the 1930s, never found any dairy-based cultures consuming skim milk.  In fact, there is no culture on this planet that ever ate a low-fat diet.

And Dr. Pottenger used different types of milk as a variable in his cat studies.  In one group he fed all the cats raw meat but then gave one group raw milk, and then different groups different types of processed milk including pasteurized, evaporated and sweetened, condensed milk.   Only the raw milk-fed group maintained good health in succeeding generations.

Let’s not forget that there is a reason the fat-soluble vitamins, A, D, E and K are called FAT- SOLUBLE.  That means they’re absorbed in the body via fat.

Drink skim milk and you’re not getting any of them.  How many Americans have been shown to be deficient in those vitamins?

A doctor I met a while ago said, “I don’t even test for vitamin D deficiencies anymore.  It’s a waste of time and money.  Everyone is deficient.  I just give everyone a vitamin D supplement.”

I could list about a hundred roles that these vitamins play in our body but for the sake of my argument I’ll just focus on one of them.

The fat soluble vitamins, in particular, vitamin A and D are absolutely critical for the proper growth and development in children.  Perhaps this is why mother’s milk contains an ample supply of fat?  Perhaps this is why cultures used to value animal fats and considered them sacred for fertility and kids health?

In addition, fat-soluble vitamins help us absorb other nutrients that are also important for normal growth and development.  In particular, Vitamin D and K is vital for absorbing and utilizing calcium and is essential for children to develop strong bones.

And vitamin D fortified milk is not the answer either because the type of vitamin D the food manufacturers add is often vitamin D2, which is not a natural form of vitamin D.  In fact, vitamin D2 has been linked with calcium malabsorption.

Another role of fat-soluble vitamins is to assimilate protein.  I’m not the only kid in America who developed poor muscle tone.  Millions more growing up on skim milk and other low fat foods are experiencing the same problems.  Just take a look around.  It’s not hard to see.

Granted, my skim milk theory is just a theory.  I can’t prove it, of course.  I’m sure skim milk was just part of the equation as I wasn’t getting any good sources of fat-soluble vitamins in my crucial growing years.  After all, the best sources of vitamin A and D come from animal foods, in particular butter, egg yolks, organ meats, fish, shellfish and fish oils.  These foods were quickly disappearing from Americans kitchens when I was growing up and my family was certainly no exception.

But if I could single out one food that I consumed more of than any other in my crucial growth and development years, it would definitely be skim milk.

Too bad Parks and Recreation wasn’t on back then. 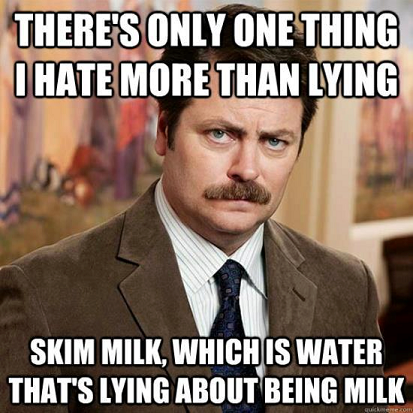 I might’ve listened to Ron Swanson.

Why You Should Listen to Ron

Dr. Ron Schmid, that is.

My story is obviously anecdotal but Dr. Ron (as he’s called) has written a well-researched book on the subject of milk. 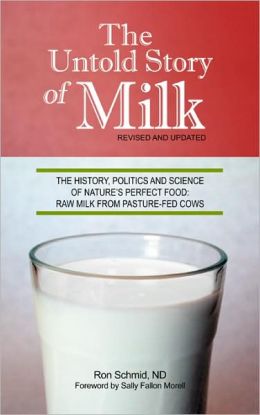 The Untold Story of Milk, provides a thorough overview of the health benefits and nutritional superiority of real, full-fat, raw milk from small, pasture-based farms compared to low-fat milk from large-scale dairy operations.

Dr. Ron also explores the history and politics of milk and details the real reasons behind pasteurization.  Here’s a hint:  it has nothing to do with public safety and everything to do with protecting the interests of Big Dairy.

Actually, that’s not a hint at all.  That’s the damn truth!

If you’re new to this issue and you’re currently drinking skim milk from your supermarket, I would highly encourage you to educate yourself, especially if you’re thinking of conceiving, already pregnant or currently raising kids.

The Untold Story of Milk is a great place to start.

Click here to get the Untold Story of Milk on Amazon 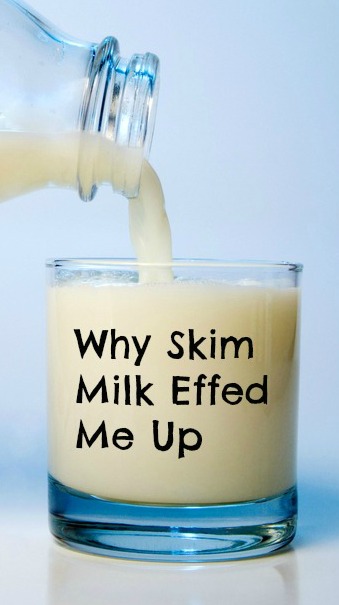