Why It’s Ethical to Eat Meat

Not too long ago the New York Times asked its readers to write essays in no more than 600 words explaining why it’s ethical to eat meat. They wanted to hear how meat-eaters defend themselves against the overwhelming perception that a plant-based diet is best for ourselves and the planet.

This was probably one of the hardest blogs I’ve ever had to write as brevity is not my strong suit. There were a thousand other things I wanted to say.  For example, I wasn’t able to discuss the health benefits of eating meat.

But 600 words is 600 words, so I did the best I could within those guidelines.

Is it ethical to eat meat? Here’s my perspective…

Why It’s Ethical to Eat Meat

Very few in the modern world grow their own food anymore.  We’ve allowed the food industry to oversee food production for us.  For decades this seemed like a good bargain.  I don’t know about you, but I know few people who would trade their modern comforts for the manual labor of farm work.

But what we’re waking up to in recent decades is that this bargain has a cost.  There is a growing awareness of the horrors of the industrial model that prioritizes profit over health, that takes more from the earth than it gives back.  At the pinnacle of these horrors are the abuses of animals in factory farms.  Anyone with a pulse can see this model is destructive and unethical.

This kind of meat production lends weight to the argument that it is unethical to eat meat.

The other common argument is that the very nature of killing animals for food is wrong and that we can survive without animal products.

I’d like to address both arguments by asking a question.

If the world’s supply of fossil fuels were to run out tomorrow, what would you eat?

For starters, you wouldn’t eat anything in a supermarket.

Supermarkets are the realm of industrialized food and at the core of this system are the fossil fuels that power the machinery to allow us to farm on a large scale and transport food long distances.  We know fossil fuels are not sustainable.

Without fossil fuels, you would therefore eat what your local environment provided. For the majority of people on this planet, that would include meat. Plant-based diets are not natural to climates and landscapes that don’t support varied plant life. Just ask the Eskimos.

Furthermore, many animals are efficient converters of scrubby vegetation to a usable form of protein for humans.  This has served countless cultures in areas of the globe without tillable soil.  Sometimes I think we forget this in soil-rich America.

And the other point is that when you look at the issue of growing food sustainably, animals are absolutely necessary.  For example, manure is nature’s fertilizer and promotes soil integrity.  Fossil-fuel-based fertilizers promote soil erosion. They have given us vast fields of corn, soybeans, and wheat, much of which goes into the processed, nutrient-deficient, lifeless food that fills our supermarket shelves.

Joel Salatin says, “There’s no system in nature that does not have an animal component as a recycling agent. Doesn’t exist. Fruits and vegetables do best if there is some animal component with them – chickens or a side shed with rabbits. Manure is magic.”

Historically, this is why we don’t see any traditional cultures that ever voluntarily chose veganism.  Animals have evolved with humans. Cows, chickens, sheep, and pigs would not survive long in the wild.  We provide them life and they give life to us.  It’s a mutually beneficial relationship.

“Meat is murder” is the battle cry of many vegetarians.  But I see more murder in the plastic-wrapped, genetically-modified, chemical-sprayed tofu burger than I do in my local grass-fed burger. How many animals had to die for that soybean field to be planted?  I could say the same about just about every plant-based food in supermarkets which destroys the diversity in ecosystems to grow crops unsustainably.

Nature thrives on diversity and that includes animals.  We need to honor the cycles of life and death in our food.  That means choosing foods that promote sustainability.

Eating meat from farms that promote sustainability promotes life in all forms, including ours. This is not only ethical, it is also necessary. 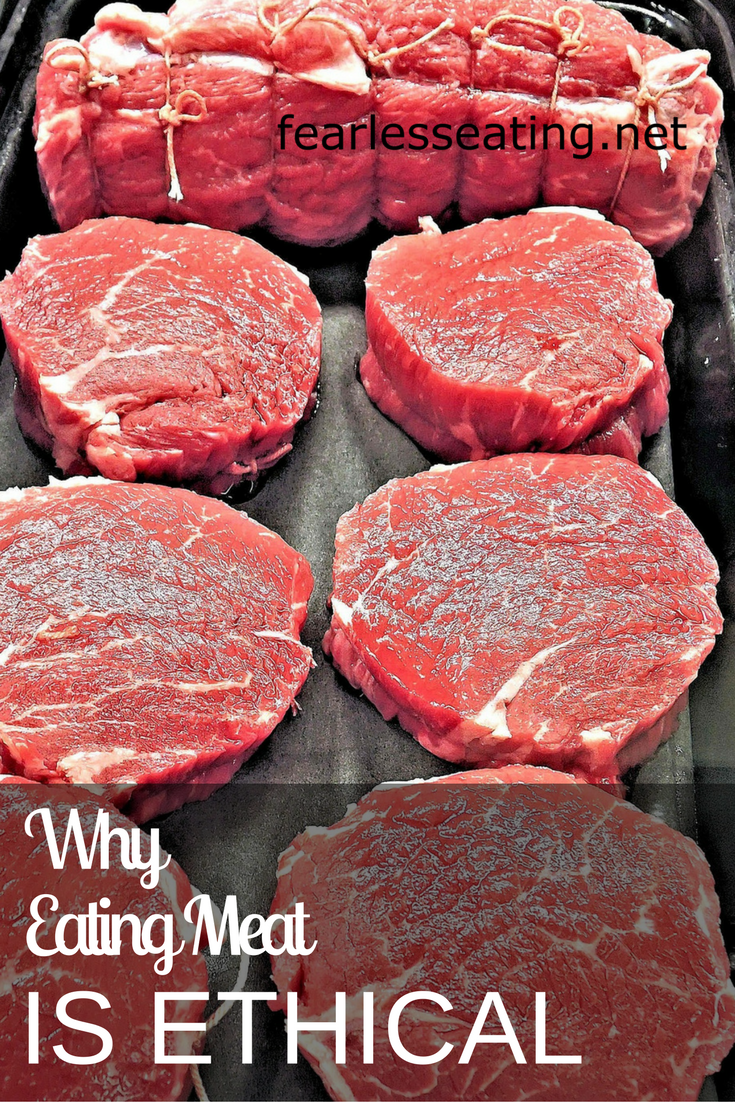