Twenty Things You Don’t Know About Me 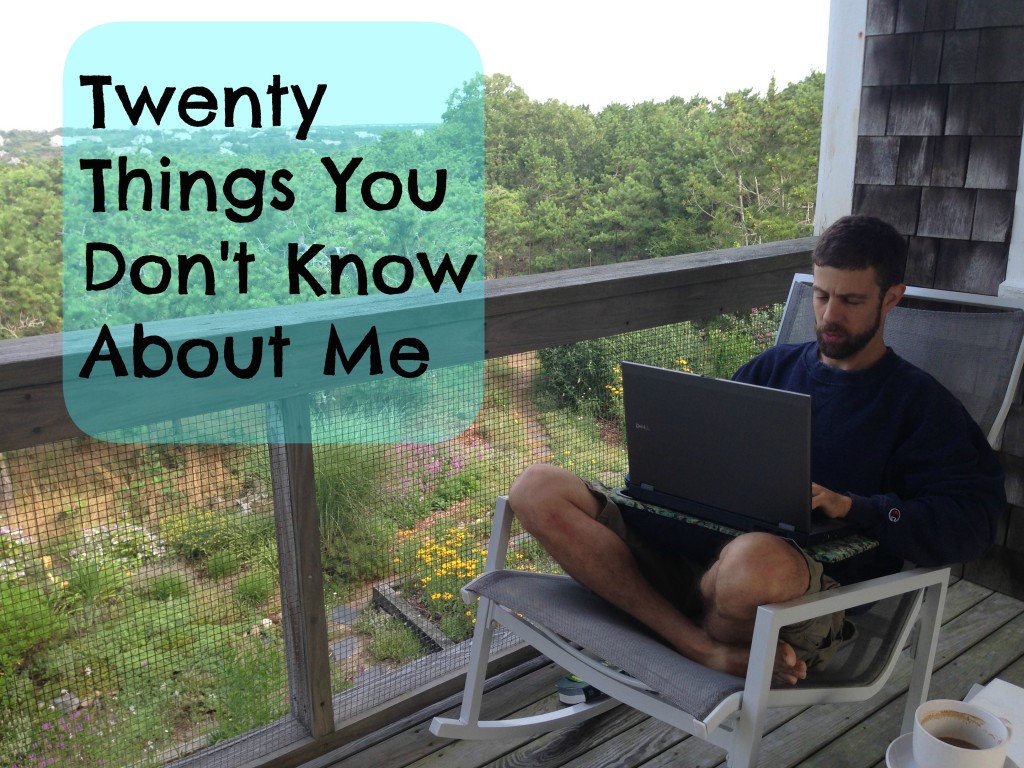 Last week I was on Cape Cod visiting my college friends.  They have a beautiful summer house in North Truro that overlooks Provincetown harbor.

My favorite thing about visiting (besides the seafood and beaches) is to sit on their deck and sip their fantabulous homemade lattes.

Unfortunately, on this trip I was forced to do more of that than usual.

On the first day I sliced my foot open on a rusty nail on their deck.  Luckily I didn’t need stitches but I had to take it easy.

So I hunkered down with my computer and blogged away.  That’s me in the above pic doing exactly that.

But it wasn’t all work.  One day I decided to have some fun and share some things you don’t know about me.

So in no particular order, here they are:

1.  I lived in Homer, Alaska for two years.  I drove there on a cross country trip in the summer of  ‘99 and loved it so much I decided to stay for a while.

2.  I was the spelling bee champ of my school in 5th and 7th grade.

4.  I grew up in Port Jefferson, New York (that should help clarify #3) and my parents still live in the house I grew up in.

6.  I love Thursday night NBC sitcoms and have been watching them since the early 1980s.  My all-time favorite is Cheers (Norm!).  And albeit total genius at times, I think Seinfeld is overrated.

7.  I’ve lived in 5 states plus Washington DC and have had over 80 roommates since college.   I consider my two current roommates among my favorites.  Not too long ago I helped one of them change her diet and she was very grateful.

8.  My favorite musical artists are Led Zeppelin and Joni Mitchell.

9.  I attended a conservatory for classical guitar but a bad case of tendonitis forced me to withdraw after one year.

10.   I attended the longest rain delay in major league baseball history.  Seven and a half hours on August, 12, 1990 at the old Comiskey park in Chicago.

11.  I once sat in complete silence for 20 straight days.

12.  I have a minor fear of driving in cities and have only driven a vehicle into New York City one time.  That vehicle was a limo.

14.  In case you missed my last blog, the best meal I ever had was at a Pizza Hut.

15.  I haven’t traveled to many countries but I’ve spent almost a year of my life in Thailand, Burma and India.

16.  I won a chicken wing eating contest by eating over 80 wings in one sitting.

18.  In a past restaurant job I waited on Barry Williams, more commonly known as Greg Brady.

19.  I graduated from Mary Washington College in Fredericksburg, VA with a degree in biology in 1996.

20.  I just wrote an ebook called The 30 Day Heartburn Solution:  A 3-Step Nutrition Program for Stopping Acid Reflux Without Drugs.

It will be released very soon.  If you know anyone with heartburn or GERD who takes acid blockers like Prilosec, Nexium or Zantac, please let them know.  They probably don’t know it but those meds can cause bone loss, nutrient deficiencies and exacerbate a whole host of other digestive problems.  My book can help them get off those meds with just some simple dietary changes.

“I was a skeptic the first time I went to see Craig…but determined to stop my need for Prilosec.  Three appointments later and I am down to half a Prilosec with no reflux and have lost 5 pounds (an added plus)!! His step by step tutelage has revised my way of thinking and eating…this book is a MUST READ for anyone taking acid-blockers! ”  – Laurie K.

OK, I’ll leave it at that for today.  Thanks for letting me talk about myself (and sneak in a little self-promotion for my book).  And if you’d like to know more about anything on my list (including the book), you can ask in the comments below!

How to Find the Best Prices on Organic Food Online