A New England-style scallop stew is basically in the style of a traditional oyster stew. These old-time New England shellfish “stews” are not really stews but rather brothy soups made with a combination of broth and milk or cream. Oyster stew is by far the most famous because in the late 19th and early 20th centuries oysters were dirt cheap and plentiful. Oyster stew was a wildly popular dish during this era. But other variations existed, including versions that used clams, shrimp, lobster, and scallops. These latter versions are relatively rare today but you can still find recipes floating around in old New England cookbooks.

It’s pretty simple and straightforward. Start out by sauteing something in the onion family. Add your shellfish and saute it for a minute or two. Add some broth and milk or cream. Stir it all together and simmer until everything is cooked through. Add some optional seasonings like cayenne, paprika or celery salt. You could even add a dollop of butter. This was actually not uncommon back in the day.

One of my favorites old-time cookbooks, Clam Shack Cookery, written by fisherman Captain Phil Schwind, includes the following gem in his scallop stew recipe: “Serve in hot bowls in which have been placed chunks of butter as big as walnuts.”

Anyway, that formula is pretty much it. For something so simple you wouldn’t believe how delicious it is. And it’s perhaps the easiest soup you could make outside opening a canned soup and warming it up. In fact I’d say a scallop stew is even easier than making an oyster stew because shucking oysters can be somewhat tedious and as I showed in my oyster stew post, downright dangerous!

The biggest difference is that with an oyster stew you’re using the oyster liquor from the shells to flavor the soup. That intensely briny oyster liquor, which all oyster enthusiasts love, is really the essence of the stew. You really don’t need or even want anything else (wine, extra herbs, citrus) to interfere with that pure and fresh oyster flavor.

But scallops, even though they’re also a bivalve like oysters, don’t have that intensely flavored liquor inside. Even if they did, it wouldn’t matter because they’re shucked before they reach the market. Interestingly, what we all buy as scallops is really only the muscle that holds the shells together. I’ve read that other parts are edible and quite delicious. But scallop shells don’t lock together as tightly as oysters thus making them more prone to spoiling. This is why we can’t purchase whole scallops in the shell, at least here in America.

When making a scallop stew you can simply use clam juice (also called “clam broth”). By far the best tasting clam juice on the market is Bar Harbor clam juice. It’s one of the few bottled broth products I highly recommend.

Finally, because clam broth isn’t quite as intensely flavored as oyster liquor, I recommend adding a little dry white wine to your scallop stew which really enhances and accents the clam broth. 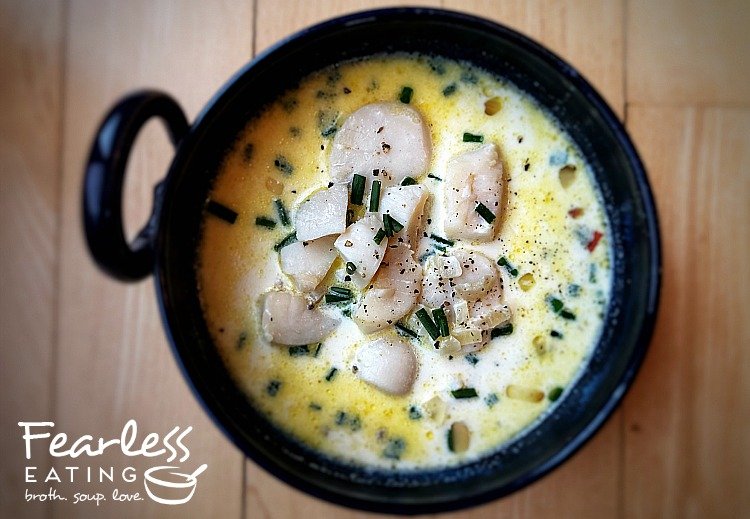 A New England scallop stew is a simple variation of the more well-known oyster stew. 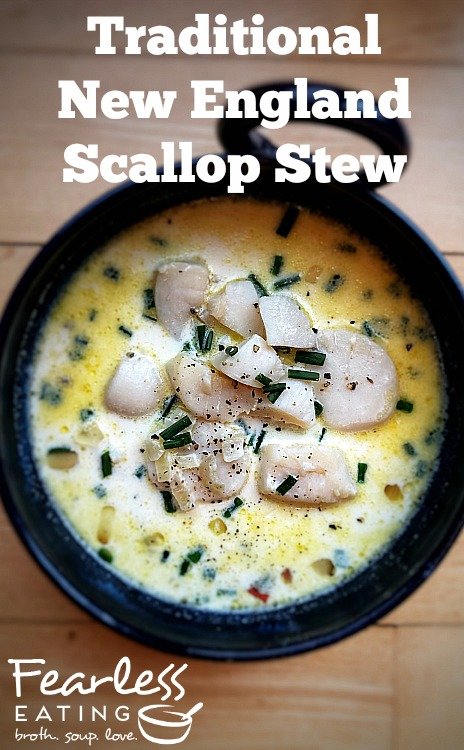