The “Whatever Good Enough” Way to Cook 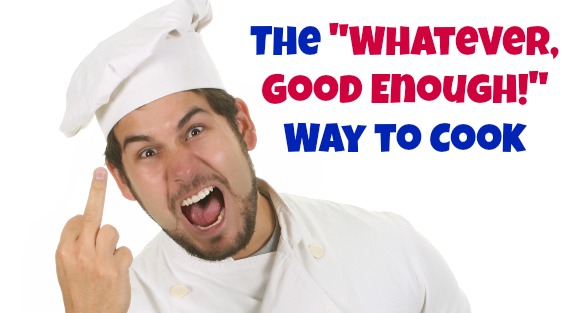 The defrosted stew meat had been sitting in my fridge for five days.  I’d planned on making the stew this past weekend but got sidetracked.  It was now Tuesday and it was now or never.

And by “now” I meant in the next 15 minutes before I had to meet with clients.  After that, this very pricey, grass-fed stew meat would surely rot in my fridge as my schedule was chock full for the rest of the week.

I knew I didn’t have time to pull out a recipe book or be specific with measurements or ingredients.

So I whipped out the old “whatever good enough” method of cooking.

In a mad rush, I chopped up an onion, some potatoes and threw them in the crock pot.  I really wanted more onions but only had one.  And I’m not a big fan of potatoes in stews but didn’t have any other vegetables around.   Whatever good enough.

I wanted garlic but wasn’t sure how many cloves to put in.  I quickly peeled 6 cloves.

I wanted to brown the beef but didn’t have time.   So I threw it in un-browned.

I wanted beef stock but didn’t have any.  So I threw in some frozen chicken stock from the freezer.

Guess what I said?

I wanted a good quality red wine but didn’t have any.  So I threw in a junky pinot noir I had lying around.  I had no idea how much wine to throw in so I went with the “more is better than not enough” philosophy.

I turned the crock pot to “high” and raced out the door.

Four hours later I came home to the most delicious tasting stew I’ve ever made.  Was it luck?  Maybe.

But it doesn’t matter.   The point is that modern life is crazy.  Sometimes we can plan great meals and sometimes we just gotta say, “Whatever good enough” and hope for the best.