In my six years living in western Massachusetts there hasn’t been a single event in Boston that I’ve deemed worthy to spend two hours (and sometimes three to four) driving across the entire state, fighting traffic on the Mass Pike.

Until this past weekend.

Because when I saw the lineup of speakers, exhibitors and events at the Boston Fermentation Festival, I knew I had to go.

At the top of that list was the chance to see Sandor Katz, author of Wild Fermentation and The Art of Fermentation, perhaps the two most widely read books on the topic of fermentation.  Many consider Katz the most influential figure in the fermentation revival movement today.

Because if there’s any evidence there’s a revival going on, The Boston Fermentation Festival was absolute proof.

Thousands of people came out on a beautiful Autumn day to to not only hear Sandor speak but to hear many other great speakers, authors and chefs and to visit the dozens of stalls and exhibits on all things fermentation.

Here’s just a few pics of all the great offerings from the fermentation festival: 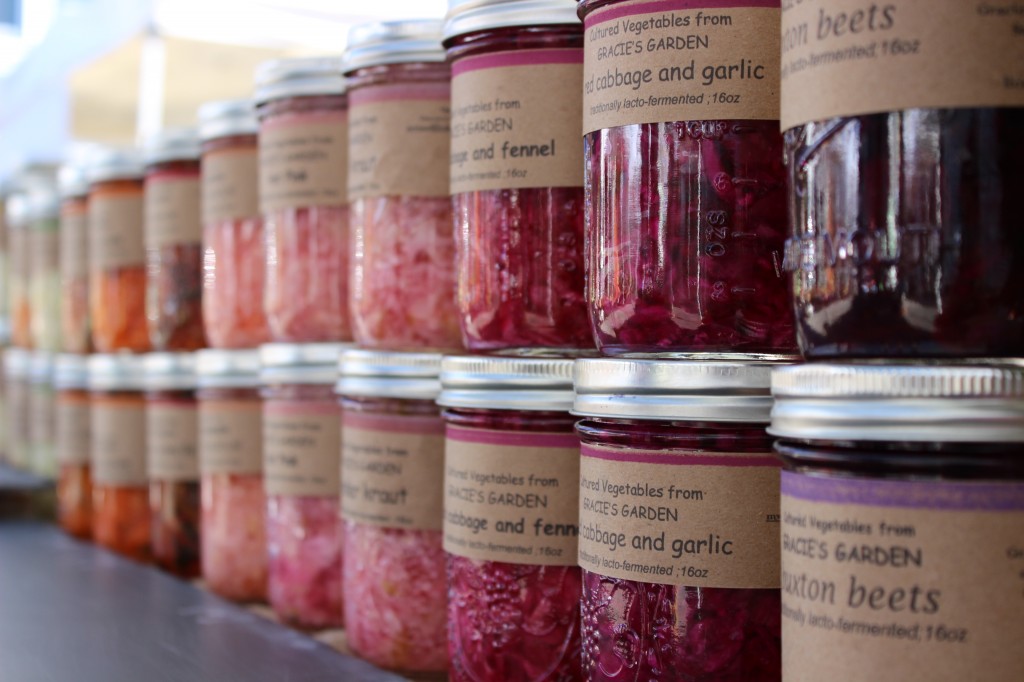 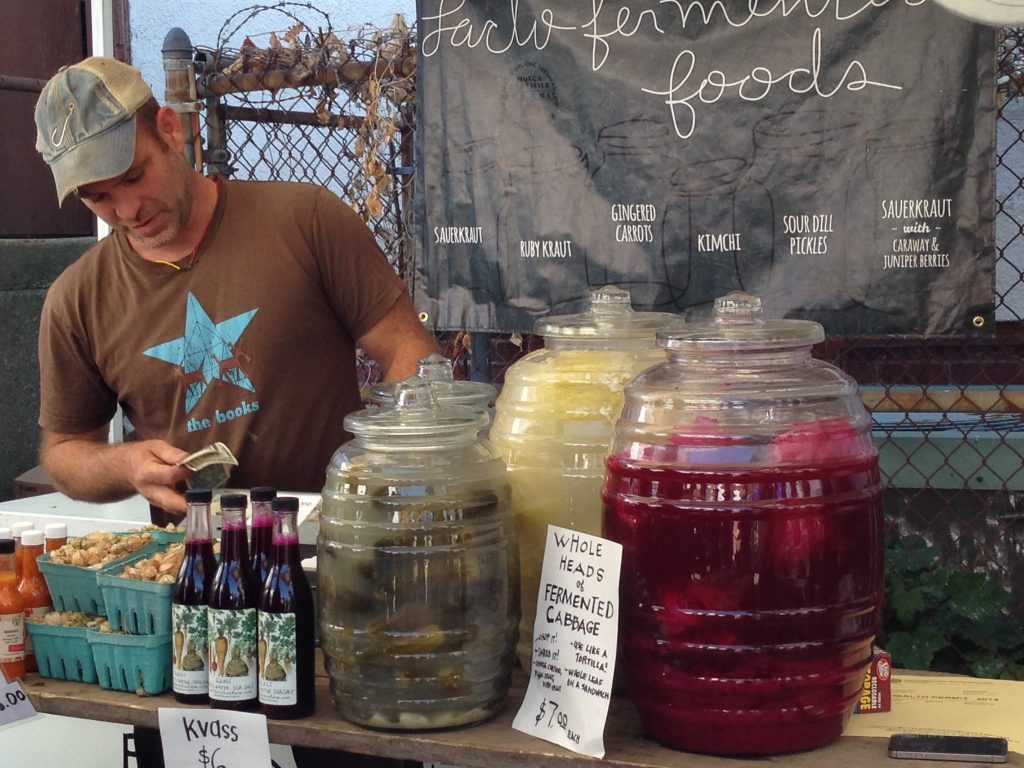 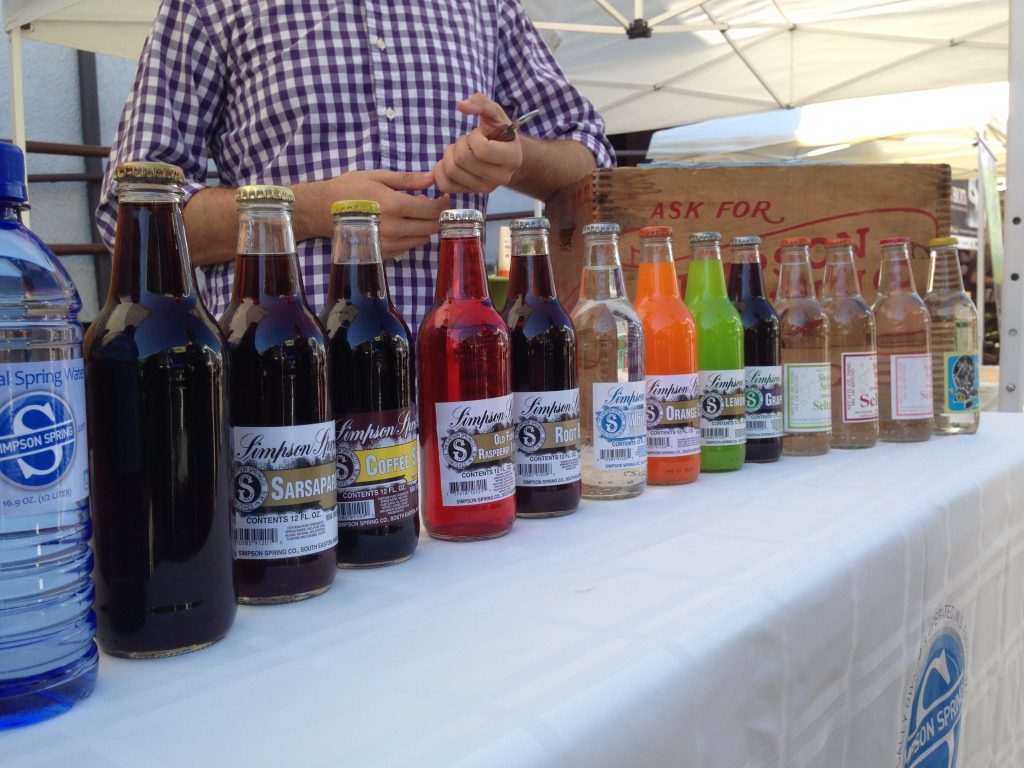 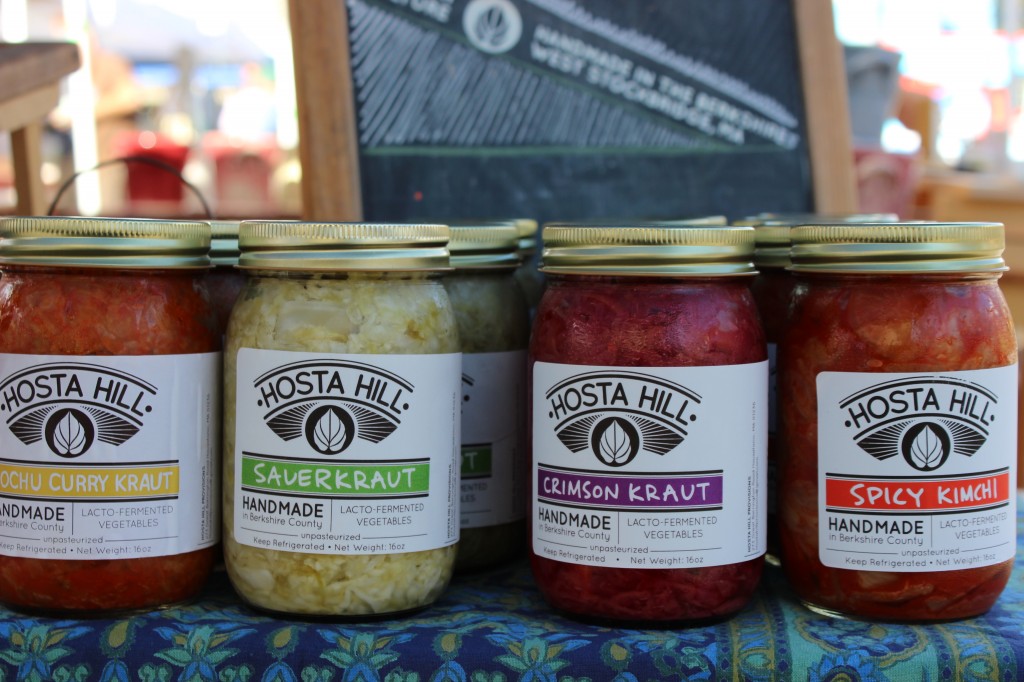 Hosta Hill is located in western MA and their kimchi is my absolute favorite.  You can check them out at www.hostahill.com 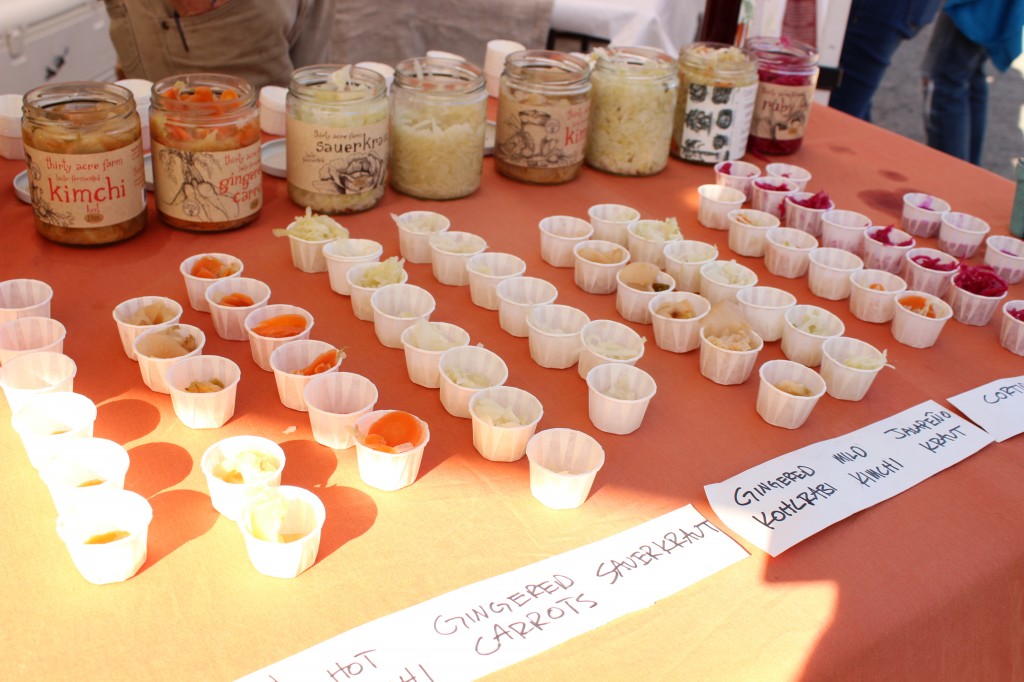 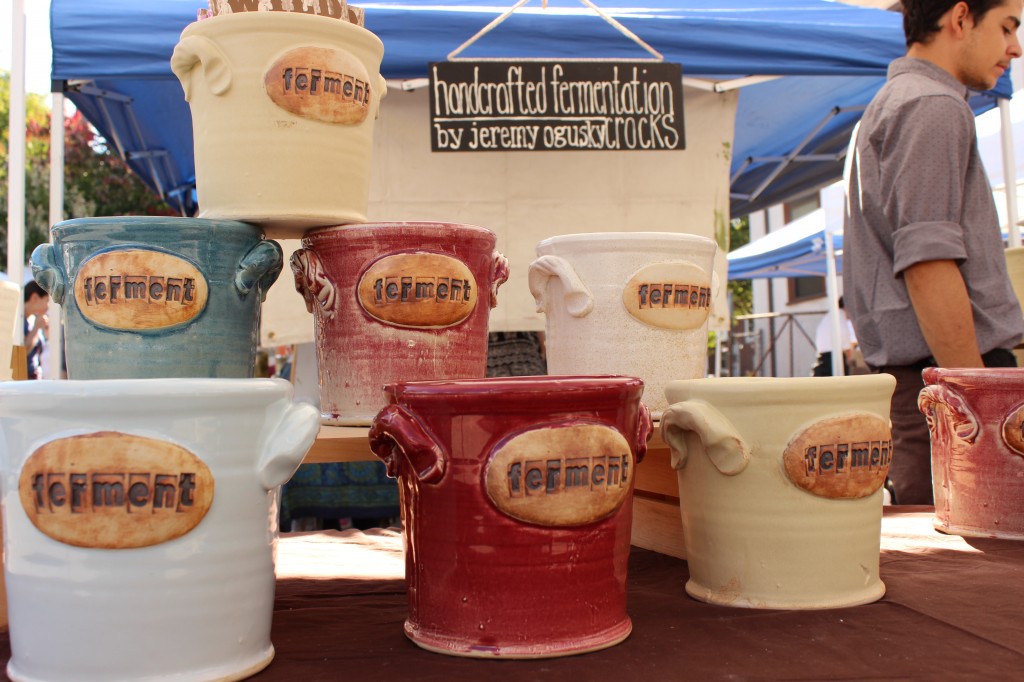 Jeremy Ogusky, one of the fermentation festival event coordinators, is also a potter who makes these beautiful hand-crafted fermentation crocks.  You can see all his work at www.clayrocks.com 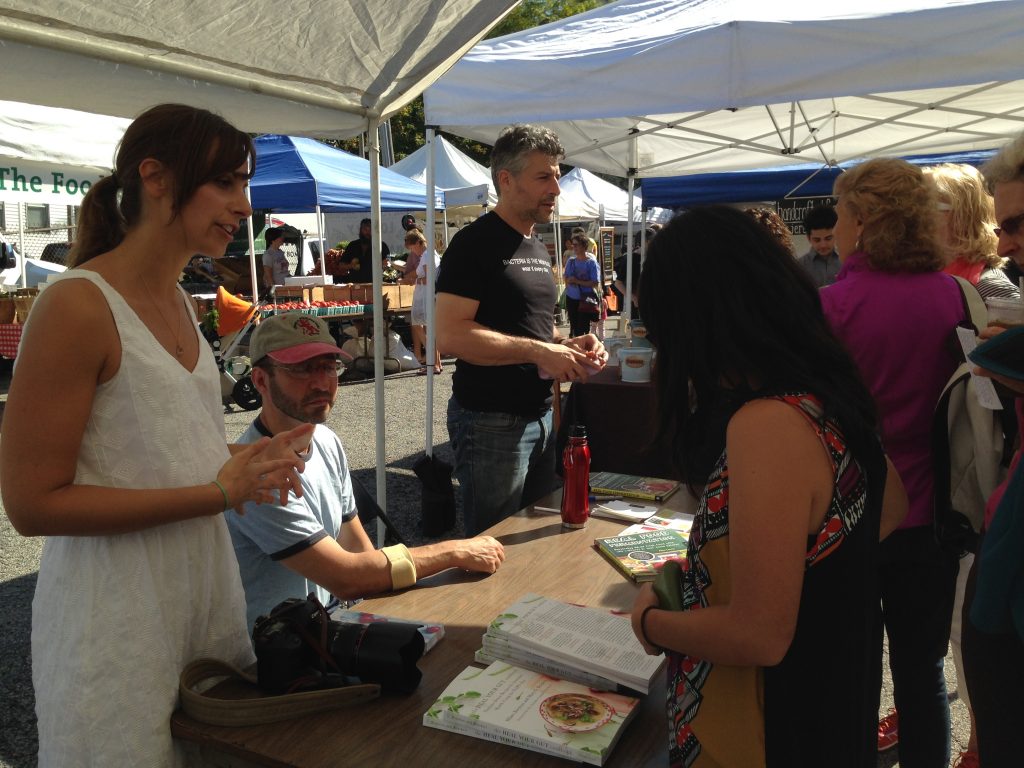 Many of the fermentation festival speakers were also authors and offered to sign their books to the public.  That’s Mary Brackett on the left, co-author of the wonderful new Heal Your Gut Cookbook: Nutrient-Dense Recipes for Intestinal Health Using the GAPS Diet.  And that’s Alex Lewin (on the right in the black t-shirt), author of the fantastic book, Real Food Fermentation. 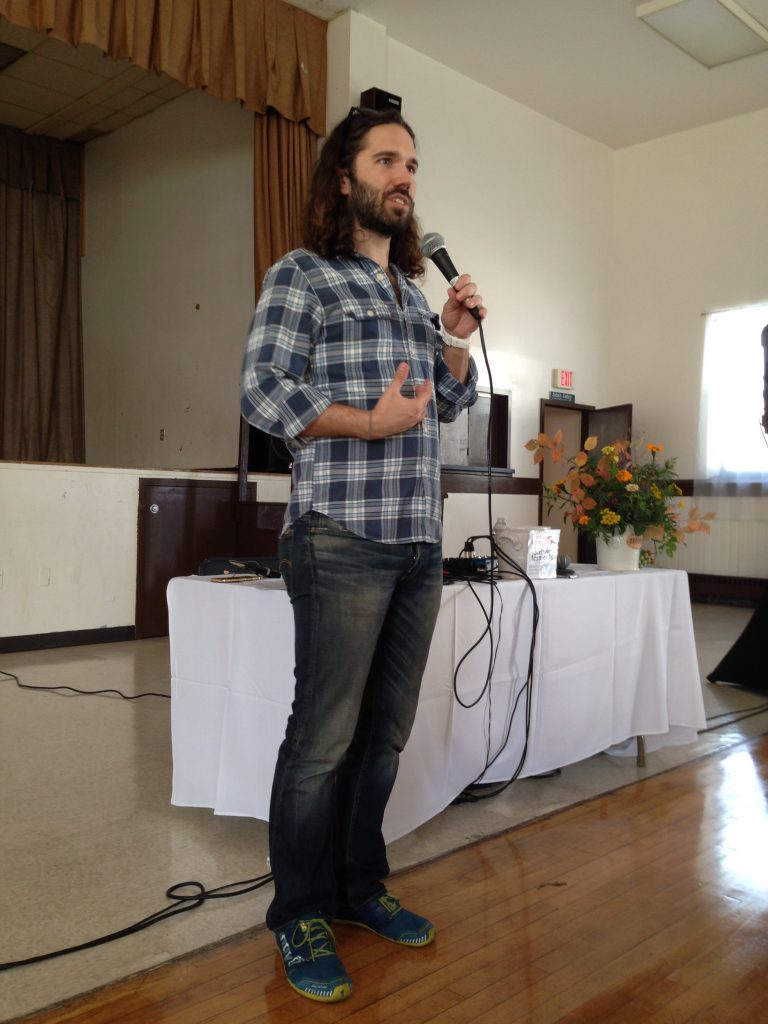 There were about fifteen speakers on a wide variety of fermentation subjects.  That’s John Durant, author of The Paleo Manifesto.  John spoke about the skin microbiome, a relatively unknown but emerging field of science that is just as important to human health as the gut microbiome.

But my favorite event of the fermentation festival (besides hearing Sandor Katz speak) was the Pickle-Off competition, mainly because I was in it!

Truth be told, I had no idea what I was getting in to and had I known the format beforehand, I probably wouldn’t have entered.

Because amidst the professional chefs and professional picklers (who have businesses producing fermented food products) …was little ol’ me.

And little did I know that I’d be judged by a panel of pickling experts (including Sandor Katz) in front of an entire auditorium of hundreds of people.

And little did I know I’d have to announce  my recipe in front of the audience after which both the audience and the judges would then taste my pickle and then comment upon it.

Guess I should’ve read the rules for entering the competition a little more closely.

Rule #1 of Real Fermentation:  No Two Batches are the Same

I decided to enter my fermented Japanese pickles recipe which combines soy sauce, ginger, garlic and a little sesame oil for a classic Japanese flavor.   I created this about a month ago and it was the most fantastic pickle I’d ever tasted.

Yup, the batch I made for the Pickle-Off  didn’t turn out quite as good as the first batch I made.   The fresh, local cucumber pickles from my CSA were no longer in-season so I had to rely on some not-so-fresh organic ones at my local health food store.  And I’m not sure why this batch tasted so different but the pickles clearly absorbed A LOT MORE of the soy sauce than the first batch.

Let’s just say they were salty…to put it mildly.

Such is fermentation.  Results are always unpredictable which is part of the mystery and  fun.

That is, except under one condition: you’re entering a pickling competition with Sandor Katz judging you.

I was sure the entire audience and the judges, upon tasting my entry, would collectively react like so many friends, roommates and family members have in the past.

And that is to say, with definitive shock and sometimes horror (like with my super spicy kimchi).

Yes, to the uninitiated, REAL fermented foods are a lot more sour and pungent than the ones most people purchase in stores and can be a little shocking to the taste buds to say the least.   Now thankfully, most of the audience members were not new to fermented foods.  However, my recipe was certainly the most exotic (and salty) of the ten.

But in the spirit of competition and fun, I decided not to cancel at the last minute and just go with it.

What could be the worst that could happen?  Get humiliated by Sandor Katz in front of a few hundred people?

Judges and audience members each received a sample of each contestants’ entry. 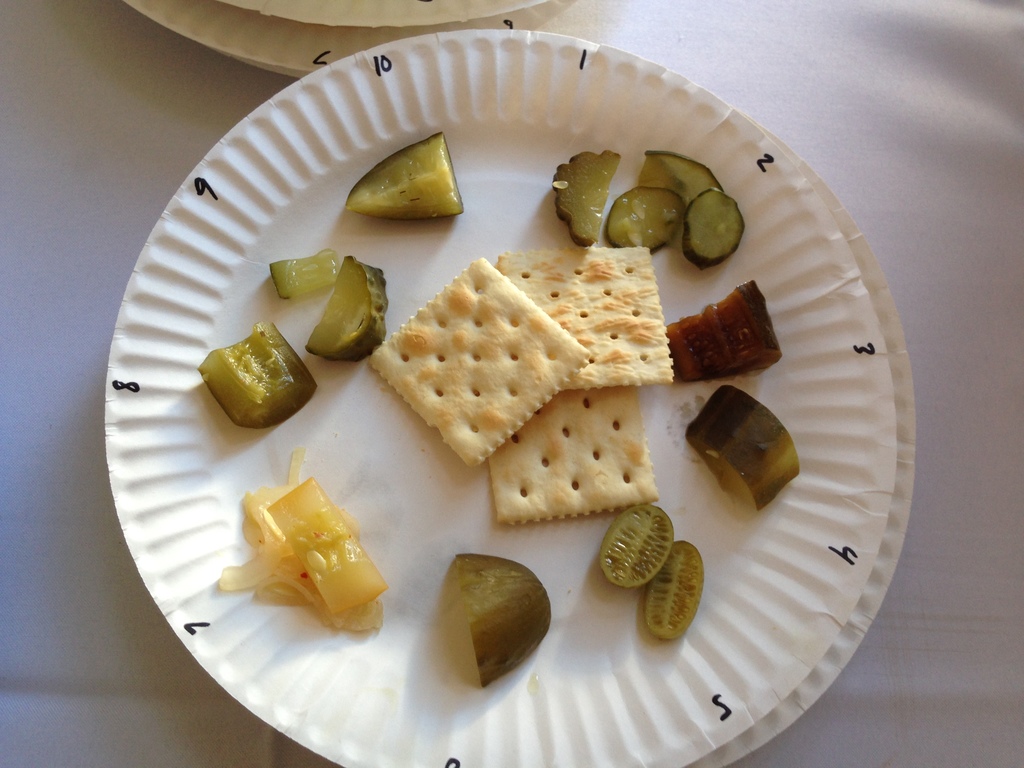 My entry was #3, that dark, funky looking one on the right.

Contestants were seated in the front of the auditorium with the judges seated on the stage. 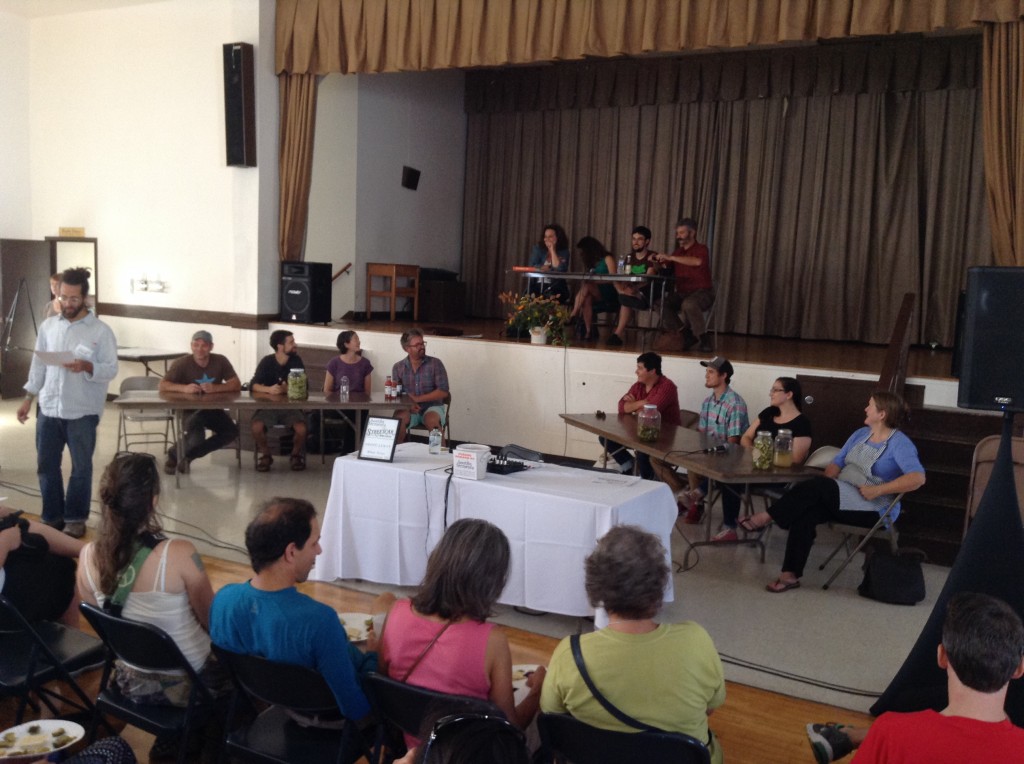 I’m at the table on the left in the black shirt.

The MC for the event, Jeremy Ogulsky, introduced each pickle at a time and then each contestant had to tell the audience about their recipe. 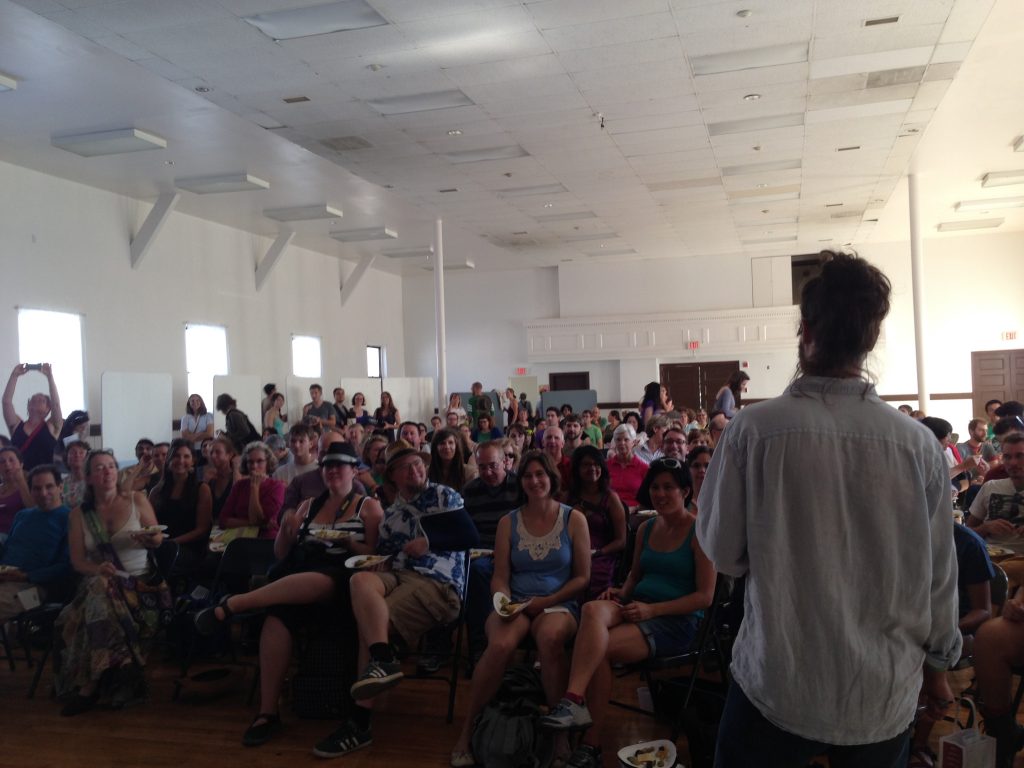 Then everyone tasted their sample at the same time and then the judges gave their opinions.

When it came to my turn, I was so nervous.  I thought for sure I’d hear the collective sounds of people spitting out my pickle, followed by an assortment of groans and giggles.   And while I definitely heard a few surprised reactions, overall it wasn’t too bad.

But now, the real moment of truth. 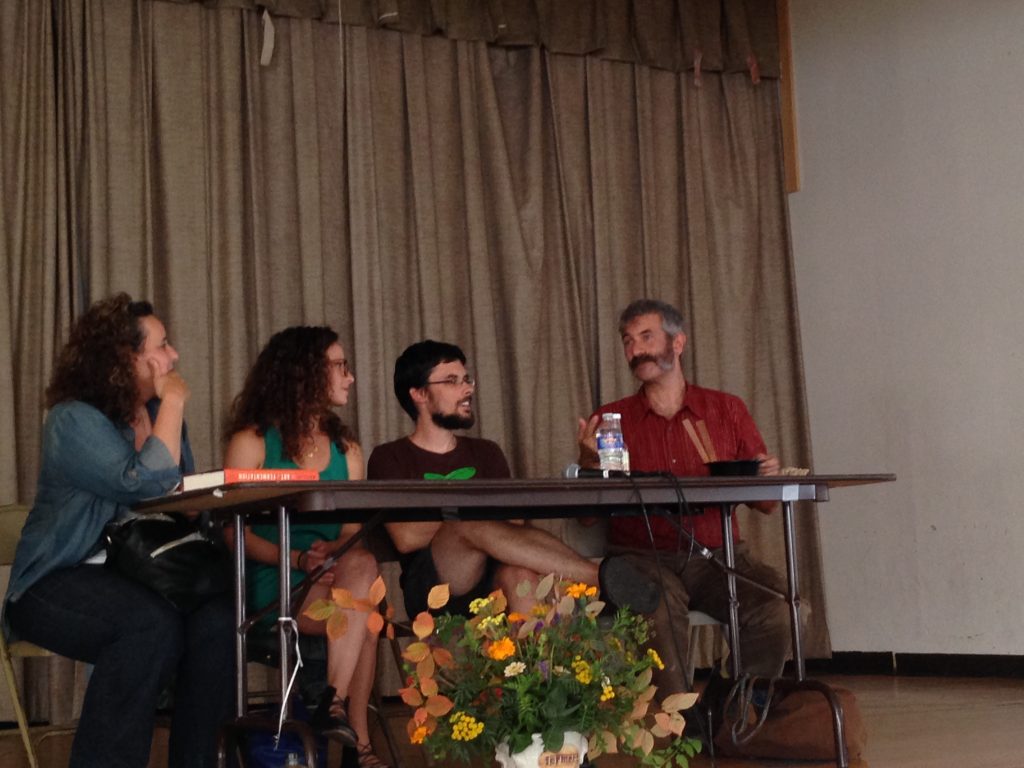 I actually took a video with my iPhone but unfortunately, the sound was horrible.  But here’s what each judge said about my pickle (from left to right in the pic):

Eva Katz, food blogger and contributor at America’s Test Kitchen – “It was intensely Asian for sure!  Big notes of sesame and soy.  A very different but very good pickle.”

Molly Birnbaum, managing editor at America’s Test Kitchen –  “The color turned me off a little bit at first.  It looked a little more like eggplant than a cucumber but I liked the surprising flavor.”

Dan Rosenberg, founder of Real Pickles –  “I think the color is awesome. I like that it’s kind of shriveled and brown and I was like, ‘What this gonna be?!’  But it’s actually really good.”

Sandor Katz –  “Definitely a different pickle and sometimes these more exotic pickles can be really interesting.  I love the sesame oil.  It’s a common flavoring in Asian pickles and sometimes kimchi and so sometimes I think working out of tradition can be really exciting.”

Unfortunately, I didn’t win.  But I didn’t care.  I was just thrilled I didn’t have to seek counseling after Sandor Katz’ critique.

And of course, it really was a lot of fun.

After the Pickle Off, the fermentation festival ended with the featured event – Sandor Katz speaking to a packed auditorium on all aspects of fermentation.  The audience was riveted and the questions seemed to never end. 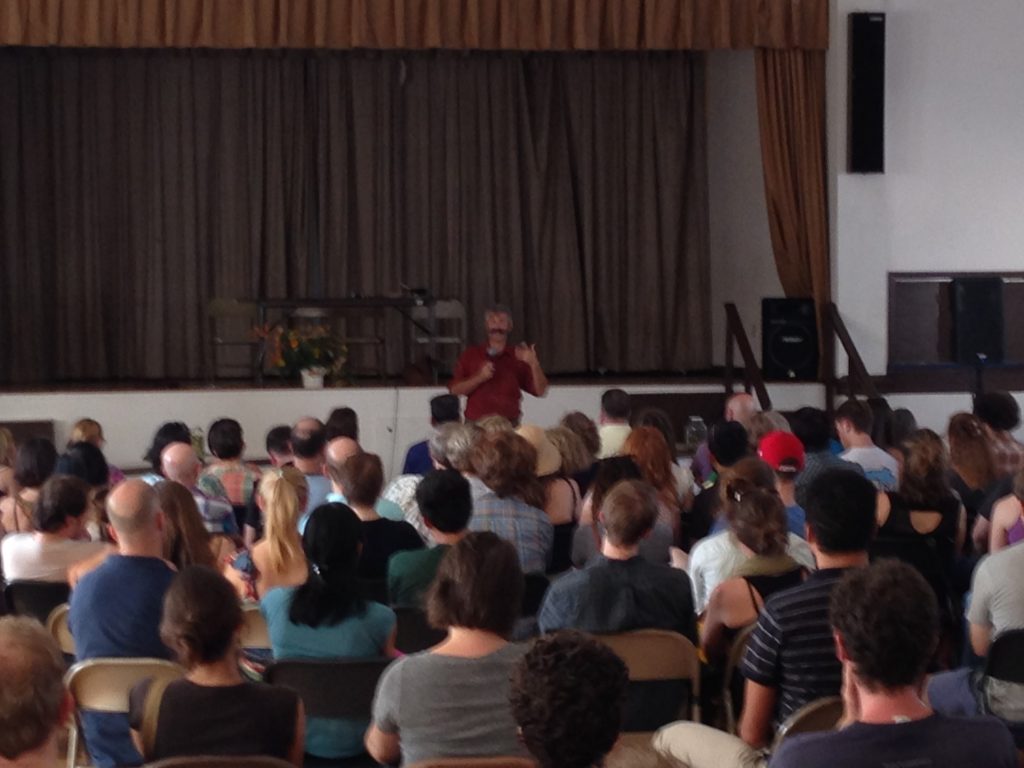 I think the reason Sandor resonates with so many people is that despite the awe-inspiring complexity of the science of fermentation of which Sandor so eloquently writes and speaks, his core message is that practicing fermentation is REALLY SIMPLE.

And that’s why Sandor Katz has become a hero to so many in the real food movement.  You don’t have to be a chef to ferment foods at home.  Nor do you don’t have to own a pickling company.

Essentially, fermentation is something people have been doing for thousands of years in their own kitchens until very recently.  And thanks to Sandor, thousands upon thousands are re-learning the simple art of fermentation at home.

So just start experimenting and have fun!   And if you’re new to home fermentation, there’s no better place to start than Sandor Katz’s own, Wild Fermentation. 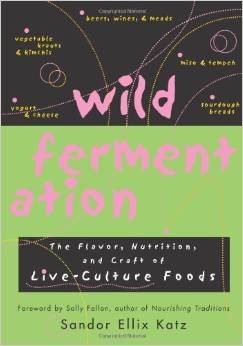 Finally, if you’re in the New England area be sure to head on over to www.bostonferments.com where you can learn about future fermentation-related events, including next year’s Boston Fermentation Festival.

I will be there for sure… no matter how long it takes me to get across that godforsaken Mass Pike.