In my new cookbook, New England Soups from the Sea, I include 7 recipes for different types of seafood stock and seafood broth. That includes two types of fish stock, two types of lobster stock, crab stock, clam broth, and mussels broth. They are the foundation of all the recipe chapters for chowders, bisques, brothy soups, and stews.

But I recognize that making a homemade seafood stock can be intimidating for some. Even for those who are comfortable making their own seafood stock and seafood broth at home, sometimes it’s just not possible. So I also include a section for shortcuts and substitutes. For example, chicken broth can often be substituted for fish broth. So can bottled clam juice.

But what I didn’t do was recommend using any store-bought seafood broths and stocks. Why? Well, the flavors and aromas of seafood are quite delicate. When fresh, they are wonderfully aromatic and flavorful. When packaged, they can easily turn flat and fishy. That’s probably why so few companies make a store-bought version.

Just take a stroll down any supermarket aisle that sells stocks and broths. Here’s what you’ll always find…

Dozens upon dozens of different types of chicken and beef products. Guess how many of them are seafood?

ZERO. Not a single one.

I’m not sure why not even one seafood stock was available. Typically, there are one, maybe two choices in conventional supermarkets. My local health food store actually has four choices.

Regardless, there are only six products you’ll ever find, be it in markets or online.

But first, let’s understand what a seafood stock is and why sometimes you’ll hear it referred to as seafood broth.

What is a Seafood Stock?

Seafood stock is an infusion of fish bones (heads and frames that have been filleted) and/or crustacean carcasses (lobster, crab, or shrimp) that are simmered in water with vegetables and herbs to create a flavorful base for a seafood soup or stew. Sometimes the juices of mollusks (clams, mussels, and oysters) are also added to a seafood stock. Basically, a seafood stock can be from an individual species or a blend of multiple species.

What is a Seafood Broth?

Generally speaking, a seafood broth is the same thing as a seafood stock, especially when we’re referring to store-bought versions. In the culinary world, the word stock is more common when referring to fish, lobster, crab, and shrimp stock. In the health and wellness world, bone broth has become trendy as a digestive tonic and is often used as an umbrella term for all types of broths and stocks. So, for example, fish broth refers to the same thing as fish stock. Note: when it comes to land-based animals, like chicken stock and chicken broth, the differences are starker, but that’s not important for this post.

With all that in mind, let’s dig into the review! Scroll down below the video to find a summary and links for each product.

The Six Store-Bought Options from Worst to First

#6: Avoid at All Costs: Imagine

Imagine Seafood Stock is utterly awful. There was barely any indication of seafood flavor. The best I could describe it is barely salted water. As for an aroma? Zero.

The ingredients explain why this product tastes so poor. It’s full of flavorings. They add “vegetable flavor” and “natural flavors” which are lab-made flavorings that are ubiquitous in the food industry, especially in store-bought stocks and broths. Flavorings are good indications of mass-produced, poorly made products.

The seafood used is “natural dried codfish.” Dried fish is used to make more of a light seafood broth, like dashi broth, than an actual seafood stock. But in this product, not even a light flavor comes through.

For reasons that escape me, this product gets a high rating on Amazon. I have no idea how that’s possible.

#5. Use When You’re in a Pinch: Kitchen Basics

Kitchen Basics Seafood Stock tastes a little better than Imagine. It had at least some seafood flavor, a decent salinity, and some noticeable vegetable and herb flavor. But it certainly did not taste fresh, as a real seafood stock should.

Not surprisingly, once again, the ingredients tell the story. They use fish sauce and fish concentrate for the seafood flavor. So it’s like a fish-flavored seafood stock, not an actual seafood stock.

That’s pretty much the MO of most mass-produced store-bought boxed stocks and broths. The reason it tastes a little better than Imagine is that they include some wine, herbs, spices, and vegetables.

At the very least, it’s not horrible. But I would only use this product if you’re really in a pinch and there are no other choices.

As opposed to the boxed options, Bar Harbor Fish Stock doesn’t use flavorings, and for that, I give it credit. It includes actual vegetables (not vegetable flavoring), herbs, salt, and white wine. The fish is wild-caught Atlantic haddock (and not dried fish or fish concentrate).

Although it’s good that real vegetables are used, by no means is the flavor close to homemade fish stock. It tastes a bit thin but it’s better than the two boxed options above.

Its best use would be a strong-tasting seafood dish that needs a little boost in liquid volume. For example, a seafood stew that has some strong shellfish flavor, like a cioppino, a zarzuela de mariscos, or shrimp mozambique (see links below).

To be clear, this is NOT lobster stock nor should it be used as a replacement for lobster stock (which is made from roasted lobster shells for a deep, complex lobster flavor).

It’s best used as a flavor enhancer in dishes like lobster risotto, seafood pasta like shrimp scampi or lobster ravioli, a seafood sauce, or a seafood stew.

Bar Harbor Seafood Stock tastes like a real seafood stock with rounded and balanced flavors from both seafood and vegetables. It includes wild Atlantic haddock, lobster, and a little clam juice concentrate as well as white wine and some herbs and spices.

It’s cloudier and darker in color than their fish stock which suggests why it tastes better as there are more bits of seafood and vegetables suspended in the stock.

It also has a nice saltiness, not too much but not too little either.

It’s a great choice to boost the seafood flavor of any seafood dish like chowder, paella, or risotto. But it could also stand up well to being used as a base for a seafood soup, like this monkfish soup, or any sort of broth-based seafood soup.

Aneto Fish Broth is really impressive! I was actually shocked by how good this products tastes. It has a very full seafood flavor with a good balance of fish and vegetable flavors. It’s cloudy (as a seafood broth should be) and has nice color. It tastes fresh and also has a noticeable and very pleasant aroma, which is unusual from a boxed product.

The ingredients include monkfish, hake, and cod, as well as an array of vegetables including fennel which adds a nice hint of anise flavor to any seafood stock or seafood broth.

They also understand why their product is a good one. On the back of the box, they state that they do NOT cook with concentrates, powders, dehydrated foods, extracts, added flavorings, yeast extract, or MSG.

This product will cost more than the others but you get what you pay for. It’s without a doubt, the best option for any store-bought seafood broth or seafood stock.

It’s suitable as a base for any seafood soup or stew recipe! 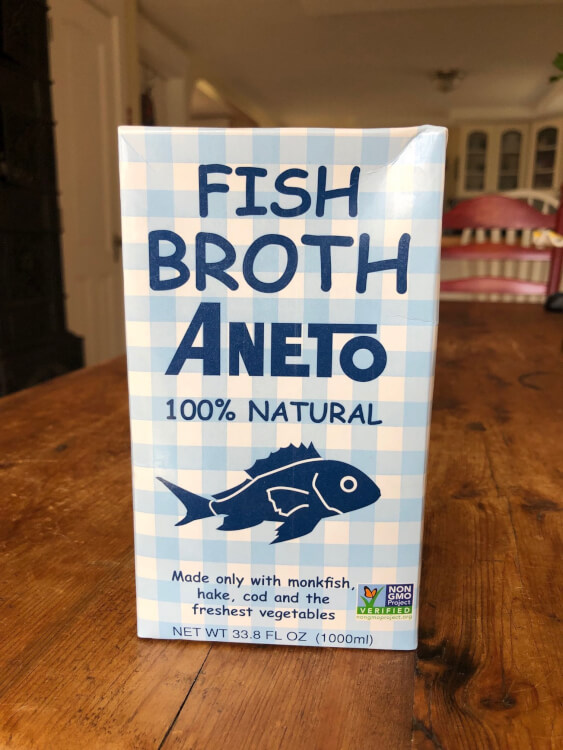