How to Make a Stinging Nettles Congee

So as far as the internet is concerned, you are witnessing the first-ever nettles congee recipe.

Pretty cool when you think about it.

Still, it is a little odd to me. Surely, somewhere in the vast history of humankind, especially in Asia where congee is an everyday food (and where nettles also grow), someone has made a nettles congee.

5 Reasons You Should Make a Nettles Congee

1. You’ve never made a congee.

If you can simmer rice in water, you can make a congee. It’s what’s added to that basic foundation that makes it so versatile and delicious. Learn the basics of how to make congee here.  Or just follow the recipe below!

2. You want to learn to forage for stinging nettles (and other spring edibles).

Wild stinging nettles are one of the most widespread and easily found wild spring edibles. Others include fiddleheads and Japanese knotweed. Two summers ago I wrote a post on how to find, harvest, and cook nettles which includes a bunch of pictures for identifying stinging nettles as well as some foraging resource guides.

3. Nettles are a superfood.

1 cup of white rice simmered in broth will make about 8 servings of congee. Of course, you’ll need to add other ingredients but you can’t get food much more affordable than that!

If you’d like more recipes beyond today’s post, I have an entire chapter in my book, Fearless Broths and Soups, devoted to congee.

It’s also a good resource if…

5. You have chronic digestive issues.

Congee has been a staple medicinal food all around the globe for centuries, but especially in Asian countries where it’s thought to have originated. Besides the benefits of nettles, you’ll also get the many benefits of bone broth. And at the top of that list is its anti-inflammatory effect on the gut.

How to Make a Wild Nettles Congee

All you have to do is simmer white rice in broth for at least an hour. The rice will break down during the extended cooking time and form a porridge-like consistency. Add more broth (or water) during the simmering if needed. Then add your nettles and any other vegetables or meats along with it.  Season it however you want – salt and pepper, soy sauce, chile sauce, etc.

Personally, my favorite congee is this Thai congee which is from my book, The Thai Soup Secret.  I simply adapted that recipe by adding wild nettles which, by the way, I found growing next to a small river right near my house! 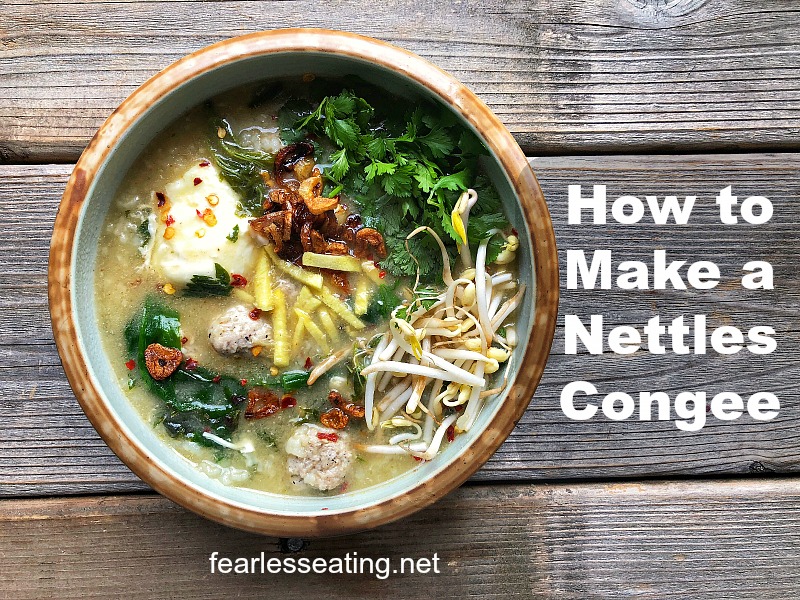 How to Make a Stinging Nettles Congee

Simply make a congee (which is just rice simmered in broth), add in your stinging nettles at the end of the simmering and season it to taste with any of the common congee seasonings listed in the ingredients. Delicious and medicinal!

Common congee seasonings, to be added to individual bowls