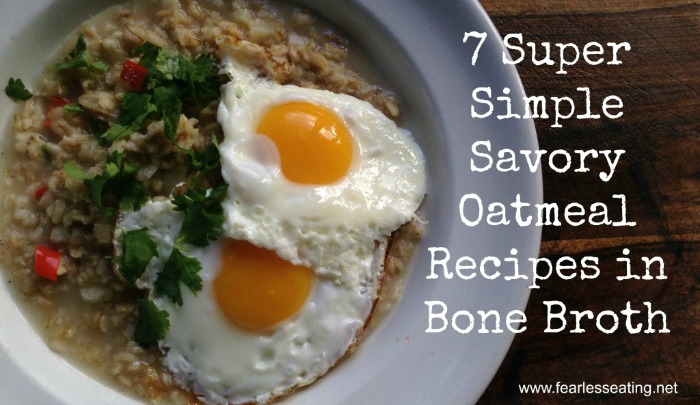 The first time I heard about savory oatmeal I was suspicious, to say the least. A friend of mine emailed me her savory oatmeal recipe, and at first glance, I thought, “Bone broth? In oatmeal? Dear God…NO!”

After all, oatmeal is supposed to be sweet. Everyone knows that. It’s just a law of Nature. Like the sky is up. Like dogs are better than cats.  And like bacon is the greatest food ever.

Then again, who would’ve thought butter and coconut oil go so well in coffee? If you live on Mars and have not heard about this phenomenon, just google it. And then try it. The first time I did I was hooked.

Which is the exact same experience I had with savory oatmeal.

Trust me, you have to experience it to believe it.

Savory oatmeal has now become a regular in my breakfast repertoire, especially in the winter.  And I’ll even have it on occasion for even lunch or dinner. It’s a quick and nourishing meal that can be had at any time of the day.

How to Make Savory Oatmeal

1. Soak one part oatmeal to two parts warm water overnight. Add 1 TSP whey, yogurt or lemon juice. This will make the oatmeal more digestible and it will also cook up very quickly.

2. Drain water and add chicken or beef bone broth and a chopped clove of garlic and simmer for about five minutes.  This will take a little longer if you’re using steel-cut oats.

3. Season to taste with salt or soy sauce and any type of hot sauce you like.  Other possibilities include worcestershire sauce, coconut aminos or fish sauce.

Of course, that’s a little plain (though still delicious).  You can liven things up by adding all sorts of veggies, herbs, spices, and even nuts and different meats.  And eggs ALWAYS work well. Add a hard-boiled egg, a fried egg or poach an egg in the broth while simmering.

Here’s 7 ridiculously simple recipes to take savory oatmeal to the next level.

This is the first recipe I learned from my friend and the one in the photo above (though I forgot to add the sriracha).

Once oatmeal is done simmering, add a dollop of worcestershire sauce and top with a fried egg (or two) and sriracha.

2. Savory Oatmeal with Peas and Peanuts

Add frozen peas when simmering oatmeal or fresh peas towards end.  Top with peanuts and a dollop of sesame oil (optional).  Season to taste with salt.

When I was in Burma, a common breakfast was a simple plate of boiled rice with peas and peanuts.  Sounds a bit dull, I know, but for whatever reason, peas and peanuts complement each other beautifully.

A drizzle of sesame oil and salt rounds this out into pea-nutty perfection.

To simmering oatmeal add mushrooms.  When ready, mix in grated parmesan, season with salt and top with fresh chives.

This is hands down my favorite savory oatmeal recipe of them all.  The addition of the parmesan gives this a faint resemblance to a mushroom risotto.

Saute the bacon and egg separately.  Add with the avocado when oatmeal is done. Season to taste with salt.  Experience an overwhelming desire to send me thank-you gifts.

When oatmeal is done simmering, top with cashews, strips of nori and season to taste with soy sauce.

Add kale while oatmeal is simmering.  Season to taste with soy sauce.

I’m not sure what the big hysteria is with kale these days but I’ll say that kale in a bone broth oatmeal with soy sauce is about as good as kale gets for me.

Chop the sausage, onions and peppers and add at the beginning of simmering until cooked.  This will only take a few minutes.  Alternatively, saute them separately and mix in when oatmeal is done.  Season to taste with salt and pepper.

I swear it works!

How to Make Broths for Savory Oatmeal

Well, I have some good news.

My new book, Fearless Broths and Soups, is now available and will show you how to make REAL bone broths at home!

It includes super simple recipes for basic homemade broths such as chicken, beef and fish.

And it includes an entire section with 4 chapters on simple ways to use broth for breakfast.

Here’s a little more of what you’ll learn:

Click here to see Fearless Broths and Soups on Amazon. 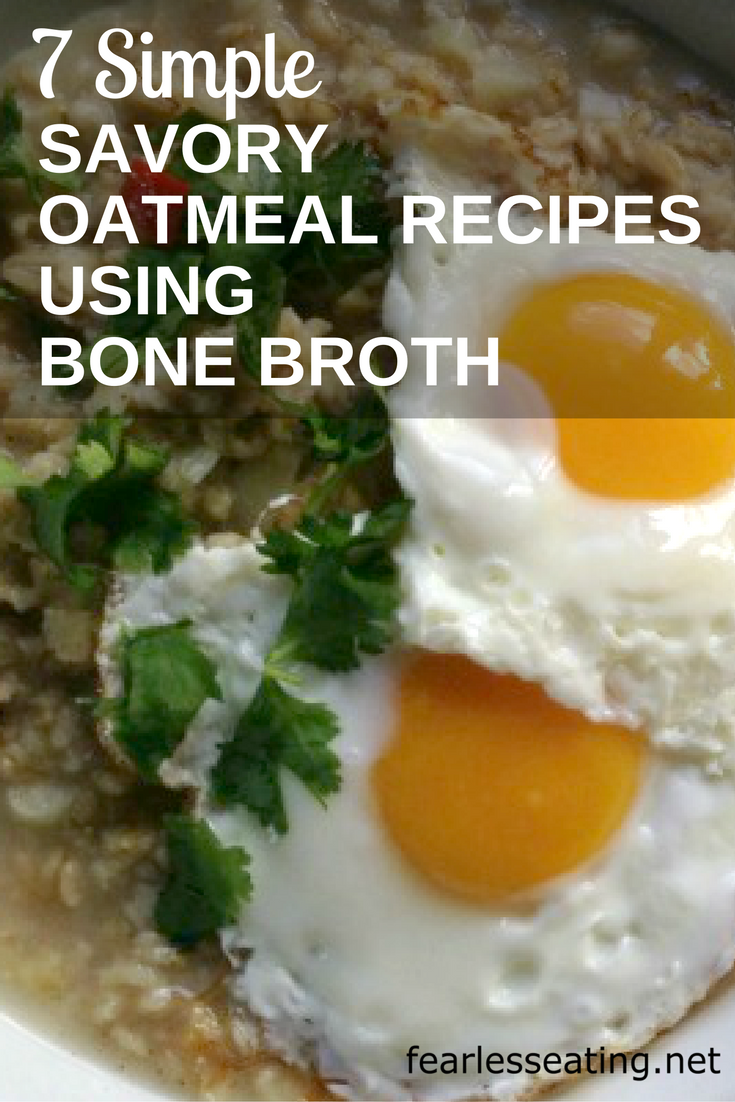