The Real Cause of GERD 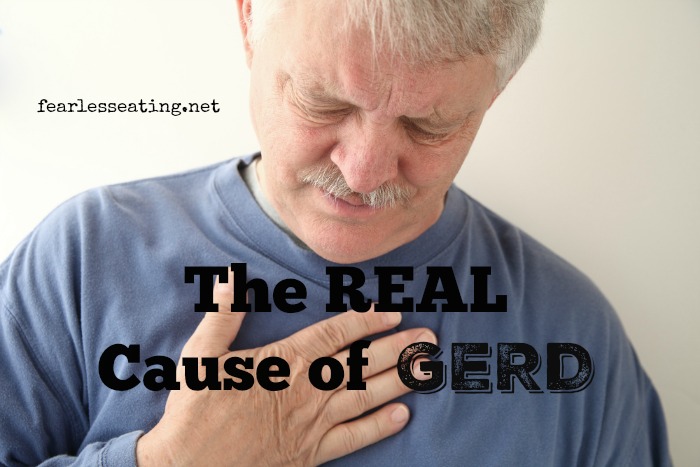 Last week a study was published in JAMA about the real cause of GERD (gastroesophageal reflux disease) and it got a lot of media attention (as studies often do).

It was announced that researchers at the University of Texas Southwestern Medical Center and Dallas VA Medical Center may have found the real cause of GERD.

In a small study of 12 men with severe acid esophageal reflux that was being successfully managed with proton pump inhibitor (PPI) medications, researchers analyzed the changes to the esophageal tissues once the PPIs were stopped.

Not surprisingly, they found reflux returned in 11 of the 12 men. But they found that the damage to the tissues was NOT caused by the chemical exposure of the acid itself (as has long been assumed) but by an inflammatory response in the esophagus to the acid.

Everyone seems to be jumping to the conclusion that all of a sudden, acid reflux is no longer the real cause of GERD but rather, inflammation is now the true culprit.

Researchers Discover Actual Cause of GERD

Inflammation, Not Acid, Cause of GERD, Study Suggests

Inflammation is Direct Cause of Acid Reflux

But these are misleading.  Because when you read the JAMA study, the acid is still refluxing. It says directly in the results, “Two weeks after stopping the PPI medication, esophageal acid exposure increased.”

It’s just that the cause of the damage to the esophagus is an inflammatory response to the acid, not the acid itself.

This challenges the long-held belief that acid is directly damaging the esophagus.

But I don’t see what the big deal is here.

But it’s not acid reflux either.

Of course, those in the pharmaceutical/medical community are now calling for the development of new drugs to target the inflammation.  🙄

But in my mind, this study doesn’t change anything.

Nobody is asking the 10 million dollar question.

WHY IS ACID REFLUXING INTO THE ESOPHAGUS IN THE FIRST PLACE?

That’s the real cause of GERD. Who cares if it’s the acid itself or an inflammatory response to the acid that’s damaging the esophagus?!

It’s as if a stream of gasoline was flowing uphill along a path and igniting a fire at a specific spot on the path. Firefighters (the pharmaceutical companies) are continually putting out the fire without asking why the gasoline is flowing upwards in the first place.

Proton pump inhibitors (such as Prilosec, Prevacid and Nexium), H2 blockers (Zantac, Pepcid) and antacids (Tums, Rolaids) rarely put out the fire for long. When people stop taking them, the fire comes raging back.

Why Low Stomach Acid is the Real Cause of GERD

It is no surprise that the participants in the study experienced intense esophageal reflux when they stopped taking PPIs. This is known as rebound acid hypersecretion.  This occurs when PPI therapy is suddenly stopped and the stomach compensates for the lack of stomach acid by now overproducing acid.

Rebound acid hypersecretion is due to a LACK OF STOMACH ACID.

Those of us in the holistic health community have been saying low stomach acid is the real cause of GERD for decades now.  There’s an actual medical term for low stomach acid which is known as “hypochlorhydia.”  Fellow NTP, Margaret Floyd, wrote an excellent article detailing 13 signs you have hypochlorhydria. Guess what #5 is on her list?  That’s right, acid reflux.

I explained the mechanism for how low stomach acid causes acid reflux in a recent post detailing the many reasons to stop taking acid blockers and I explain it in much more detail in my book, The 30 Day Heartburn Solution.

Poor digestive fire (low acidity) causes food to sit in the stomach too long. Symptoms include bloating, belching, bad breath and undigested food in your stools.  This maldigesting food can expand, ferment and give off gasses that put pressure on the lower esophageal sphincter (LES), the valve that keeps the stomach separate from the esophagus.  Over time, the LES can weaken through this continuous increased pressure and push the acidic contents of the stomach back into the esophagus which burns the lining (or in light of the new research perhaps causes an inflammatory reaction).

Now this is not to say that low stomach acid is always the reason for acid reflux. There can be many reasons including structural changes brought about by a hiatal hernia and of course, pregnancy.

But for millions of people who regularly struggle with acid reflux, there’s hope in dietary changes!

Wouldn’t it be nice if more scientific research studied the influence of food on our digestive system and offered real food solutions instead of more drug therapies?

Maybe because there’s no money in natural therapies.

Why Low Stomach Acid is a Form of Inflammation

More and more doctors believe general inflammation in the body is the root of many common diseases.

Because stomach acid is required to break down our food, a deficiency in the short-term can lead to bloating in the stomach, belching, nausea, bad breath, gas, gastritis and yes, acid reflux.

Over the long-term, chronically low stomach acid from the overuse of PPIs can lead to a greater risk of infection (source), nutrient deficiencies (source), bone loss (source) and hip fractures (source), to name a few.

So what’s the true cause of low stomach acid?

As with all things, there’s rarely a simple answer.  Stress, environmental toxins, infections and hypothyroidism can play a role.

But as a Nutritional Therapist, I think poor diet is the most widespread factor because I’ve seen so many improvements when dietary changes are made.

How to Heal Low Stomach Acid Naturally with Food

First things first, you must remove all pro-inflammatory processed foods.

Because processed food is now so woven into the fabric of our culture, millions of people no longer know the difference between real food and processed food.

Most people today know that foods high in refined sugar are highly processed.  But most people don’t know that most grain-based foods are also highly problematic.  This flies in the face of conventional dietary advice to “eat more whole grains” but there’s a HUGE difference between modern grains, which are not properly prepared for optimal digestion and traditionally prepared grains, which are.

Traditionally, cultures fermented, sprouted and soaked grains to neutralize some of their inflammatory and hard-to-digest characteristics. But few companies do this anymore.

Americans eat A LOT of grain-based foods, to put it mildly.

If this topic is new to you, Sally Fallon does a nice job explaining the difference between modern and traditional grains in this article.

This is why in my book, step 1 of my protocol is to go grain-free for 30 days.

It’s kind of like killing two birds with one stone. Because so many grain-based foods also are high in sugar by going fully grain-free for 30 days, you’ll be restricting the two most inflammatory foods in the modern diet.

Of course, there’s more to it than that.  But that’s a good start.  Here’s a short list of other common pro-inflammatory foods:

The three most important are healthy fats, bone broths and fermented foods.  These are key pillars in every traditional culture on the planet and have many anti-inflammatory properties.

Dairy can be helpful for some, if unpasteurized, but harmful for many. And of course, fresh fruits and vegetables are important too but seriously, who doesn’t know that?

In my book, I detail the many pillars of a real food diet.  All of these are anti-inflammatory and very helpful to restore proper digestive capacity which of course includes proper acid production in the stomach.

If you’d like a more thorough explanation for WHY these foods are so beneficial check out my book, The 30-Day Heartburn Solution, which also includes meal plans and recipes for how to make things like bone broths and fermented foods.

Finally, though this food approach works wonders for most, many who have been on acid blockers for extended periods will often have a very difficult time stopping PPI therapy due to the long-term suppression of stomach acid, which causes the vicious rebound effect explained above.  If that describes you, here’s an approach for how to wean off acid blockers. 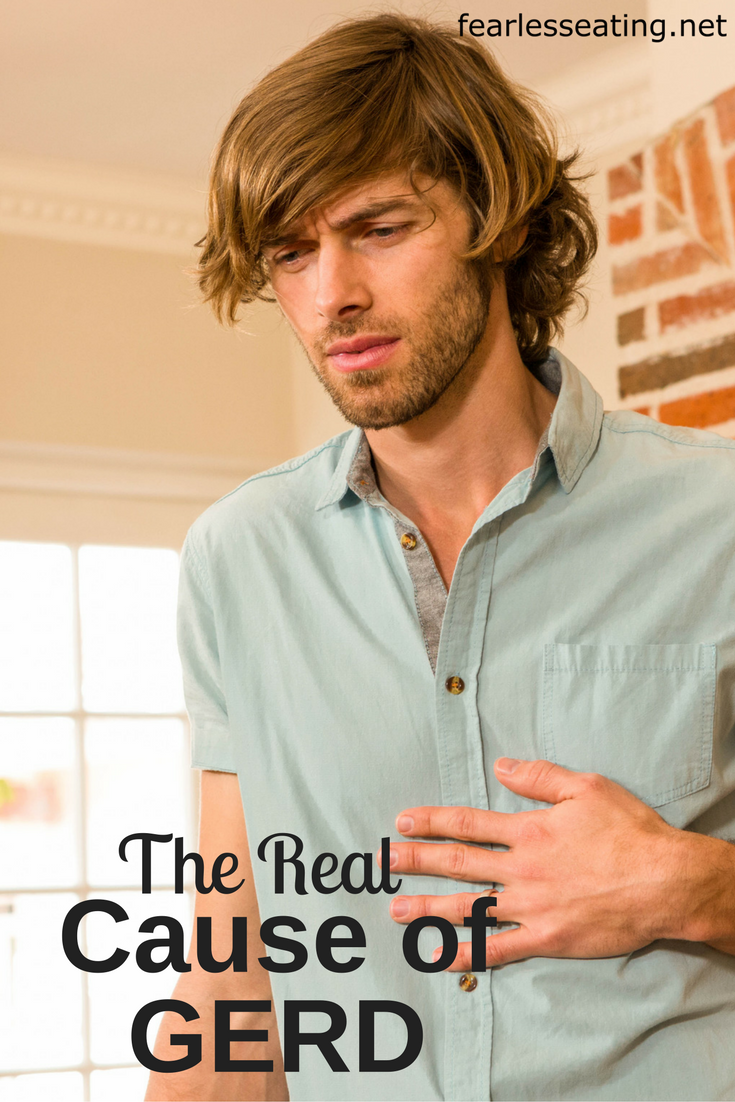