Why You Can’t Get REAL Broths and Soups In Supermarkets 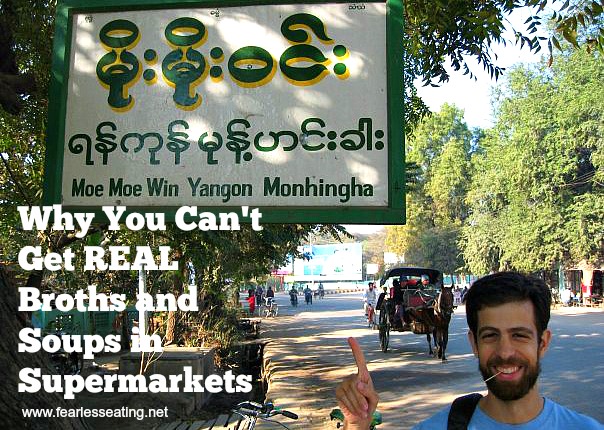 In my last post, I shared a passage (and recipe) from my new book, Fearless Broths and Soups, which was about my love of mohinga, a traditional Burmese noodle soup that I became addicted to when I traveled to Burma back in 2007. And yes, that’s me in the above pic which was taken at a mohinga cafe  Burma.  Kind of a ridiculous picture but somewhat fitting for this post.  Hey, better than a stock photo!

And fearless broths and soups do NOT come from supermarkets.

Sad to say, that includes the organic ones too.

Though most of my new book includes recipes for HOW to make real broths and soups, the first part sets the stage for WHY they are so very different from store-bought versions.  And I use traditionally made mohinga as an example to highlight the crucial differences between the two.

In fact, the title of part I of my book is “The Lessons of Mohinga.”  Some of those lessons include the health benefits, the simplicity and affordability, and the lack of any type of chemical flavorings that are used in REAL broths and soups.  But in this post I want to share with you what I feel is the biggest lesson that I learned from mohinga.

What follows is a passage from my book (slightly edited for the purposes of this post), which is lesson #2 of the five lessons of mohinga.

Besides devouring multiple bowls of mohinga in one sitting, my next favorite thing about Asia was visiting the markets that supplied the raw ingredients for the traditionally prepared broths and soups. It was and still remains the thing I most adored about the places I visited.

Nothing comes in boxes and cans. There are no misleading nutrition labels, no soul-numbing elevator music, no depressing fluorescent lighting and no disgruntled minimum wage workers. Everything is fresh, everything is local and everything feels ALIVE.

Asian markets are often outdoors, operate rain or shine, take over entire city streets, village streets, sidewalks, alleyways and parks. The vivid colors, the succulent smells of herbs and spices, curries and simmering soups, the bizarre and exotic fruits and vegetables, the busy flow of people and animals, carts and mopeds, intersecting, weaving and flowing together sweeps you into an almost trance-like state of sensory stimulation.

Some Pics of Burmese Markets

Now I traveled to Asia before I became a Nutritional Therapist and a food blogger.  I was not focused on exploring food.  I barely knew anything about real broths and soups back then.  And I knew next to nothing about photography.

Had I known then what I know now… OMG the pictures I would have taken.  My lack of photos from the markets is my biggest regret.

But here’s the best of what I took to illustrate my point: 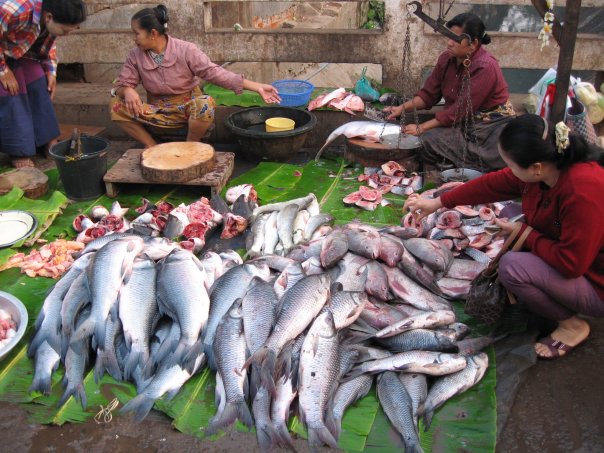 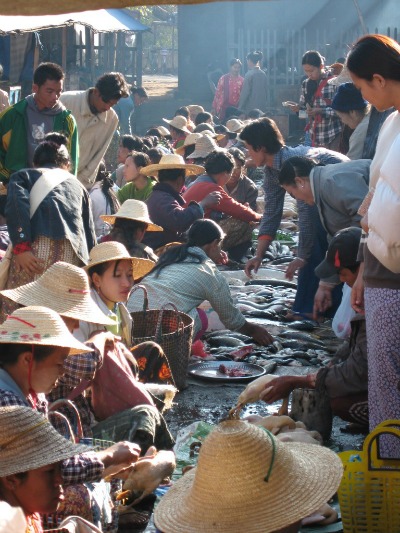 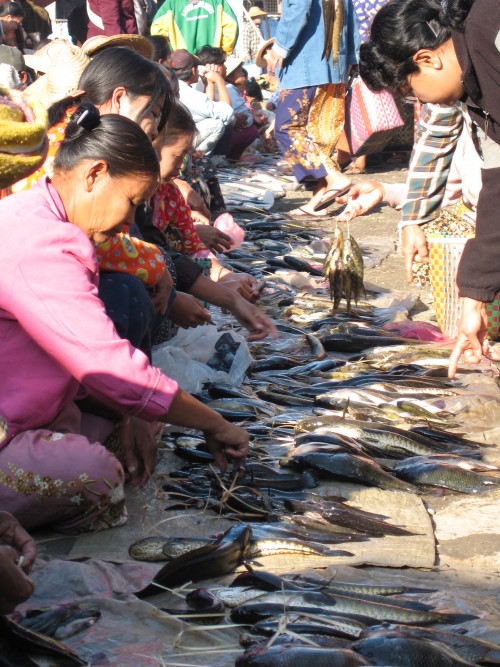 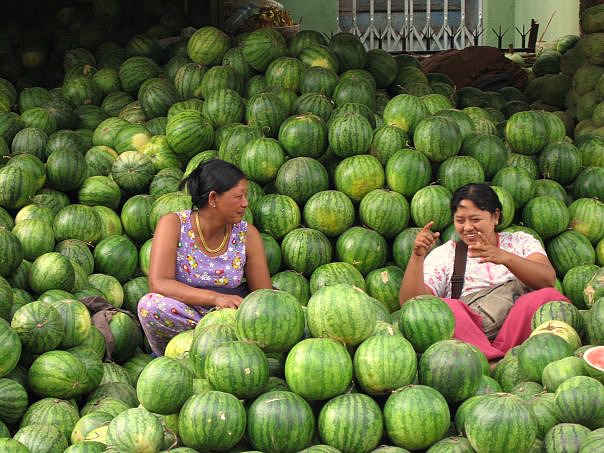 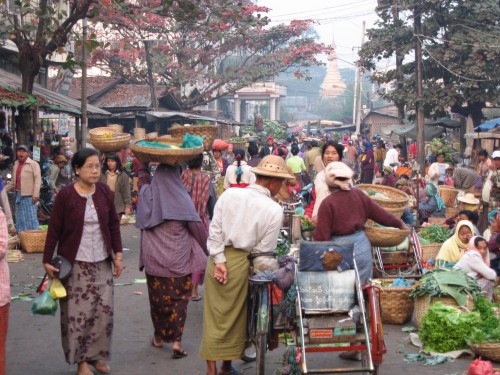 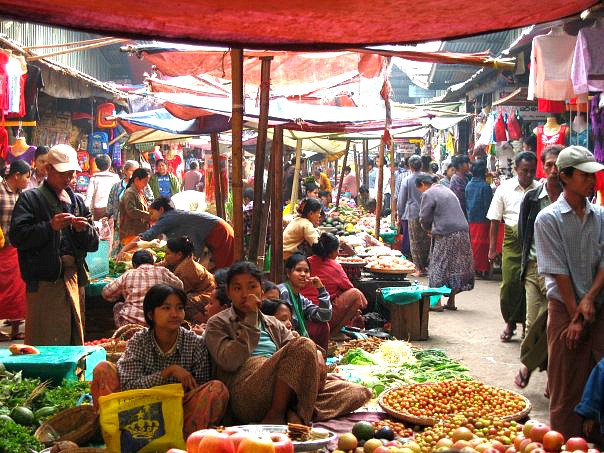 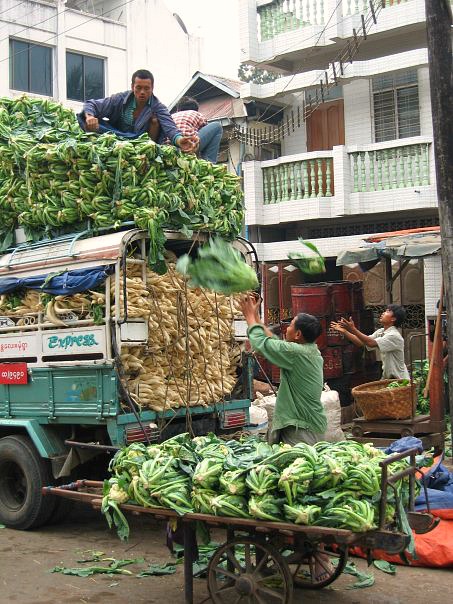 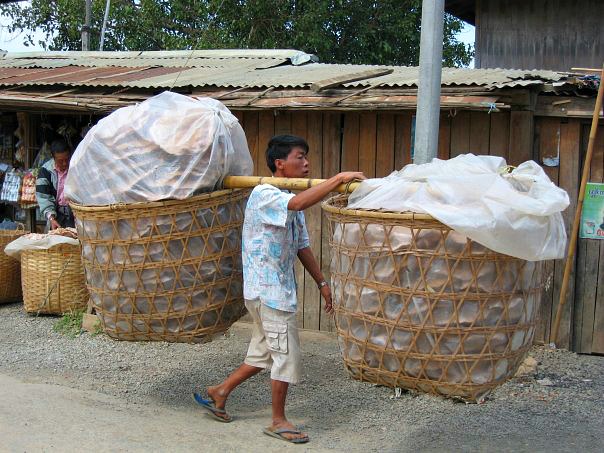 Besides all the vibrant life, there’s also a lot of death.

And it’s right in front of you.

And it can be really shocking. And this is certainly a huge difference compared to American supermarkets.

Fresh-caught seafood – fish, shrimp, eels, shellfish, crabs and squid – is often still squirming and crawling in their buckets. Pigs heads, pigs feet, whole chickens with the heads still on, chicken parts like feet and gizzards, lamb and cow parts including different bones, large cuts of meat, ribs and tails are all on display too. People tell me of similar experiences in the markets of other areas of the world – Europe, South America, Africa, etc.

This is significant because a truly nutrient-rich broth often contains more than just bones but also additional animal parts such as joints, tendons, backs, tails, necks and heads.  Of course, using these parts tends to horrify so many of us in America, especially those of us raised in cities and suburbs. But the reality of death is the same in American supermarkets as it is in Asian markets. It’s just kept hidden from us.

Rarely will you see bones for sale anymore which are an essential component of making a good broth. So many of our meats our deboned, trimmed of fat and packaged as boneless breasts and filets. And rarely do you see the parts of animals that are highly valued and on display in Asian markets – feet, necks, heads, tails, etc. In fact, many of those parts are shipped off to Asia from American processing plants! And something quite bizarre has happened as a result.

Millions of Americans have become afraid of real food.

Why Americans Are Afraid of Food

I see this over and over when I work with my nutritional therapy clients. Because bone broths are so beneficial for many health issues, especially digestive problems, I ask most of my clients to start making bone broths at home. The objections I receive are often shocking and well, sometimes funny. Sometimes I have to bite my lip when one of my adult clients makes a squirmy face like a little child at the sheer mention of making a broth with actual bones.

“Wait, are you saying you want me to use actual BONES?!”

That’s a small sample of some of the more common reactions I get.  People say kids are picky eaters but in my experience, adults can be a lot worse.

And bone broths are just the tip of the iceberg. Jessica Prentice in her wonderful cookbook, Full Moon Feast, writes:

“All too often, modern Americans are like oversized infants when it comes to food. We are used to having it provided for us. We are like baby birds in a nest with our mouths wide open, squawking for more. But we never grow up into the mama bird that goes and hunts and finds food and provides. We never learn how to feed ourselves, because it is so easy and culturally supported not to.

People who cook on a daily basis and who like to prepare food from scratch are considered either foodies or health nuts. Cooking is not seen as a universal skill of self-sufficiency and adulthood, like driving a car. We are surprised when someone doesn’t know how to drive a car, but we are not at all surprised when someone doesn’t know how to cook. Large corporations are more than happy to keep us in this state of helplessness. It creates a huge market for factory-processed products and fast food.”

And it also keeps us afraid of food because we no longer process it ourselves. It wasn’t too long ago when you wouldn’t see this fear of food in America. Before the rise of Campbell’s, Progresso and store-bought broths and soups, we made them ourselves. We butchered our own animals, used all parts of the animals and worked in tight-knit communities to raise food together. I love listening to older folks speak with warmth and fondness for the freshly prepared foods of their parents and grandparents. I often hear a tinge of sadness in their voices as they recall these foods not just for their taste but for their connection to a simpler time.

Of course, our food system has changed dramatically in the past 50 years or so. Now, we let the food industry raise and process our animals for us. Worse, the animal products in most mega-supermarkets come from factory farms.  This is a good reason to start sourcing your food from real farms and real farmers that treat their animals humanely. And that is a truly fearless act in today’s world where convenience and cost usually trump conscience and awareness. Waking up to the horrors of our food system takes commitment.

It also takes a little courage sometimes too.

Learn to Make REAL Broths and Soups at Home

Now don’t worry. Making REAL broths and soups doesn’t mean you have to start butchering your own animals. Nor do you absolutely have to use animal parts like feet and heads. But you will need to start using bones.  It’s kind of like, you know, an essential part of making bone broths.

If it does freak you out, I promise you’ll get over it quick. Because when you start to make properly prepared broths on a regular basis, slowly simmered from real bones, you will be amazed at the incredibly delicious soups you will make from them. Store-bought soups can NEVER compare to the real thing.

Doing it in a way that saves you time and money will help too.

And if you have a chronic health issue, as most of us do today, you’ll probably start feeling better too. For most people, that’s the real game changer. All previous fears of food evaporate in the presence of improved digestion, better sleep, more energy and clearer thinking. I can attest to all the clients I’ve worked with that are amazed at the healing power of broths and soups.

It’s just a matter of learning how to do it, like your grandmother used to.

And my new book will show you how!

I take many traditional soup recipes like simple broth-based soups, creamy vegetable soups and asian noodle soups and pare them down into simple 3-step recipes.

All of the recipes included will emphasize simplicity.

They’re geared to all you stressed out moms and dads, workaholics and non-cooks trying to figure out how to eat well with limited funds and time.

And these days, that’s just about everyone.

Click here to find Fearless Broths and Soups on Amazon 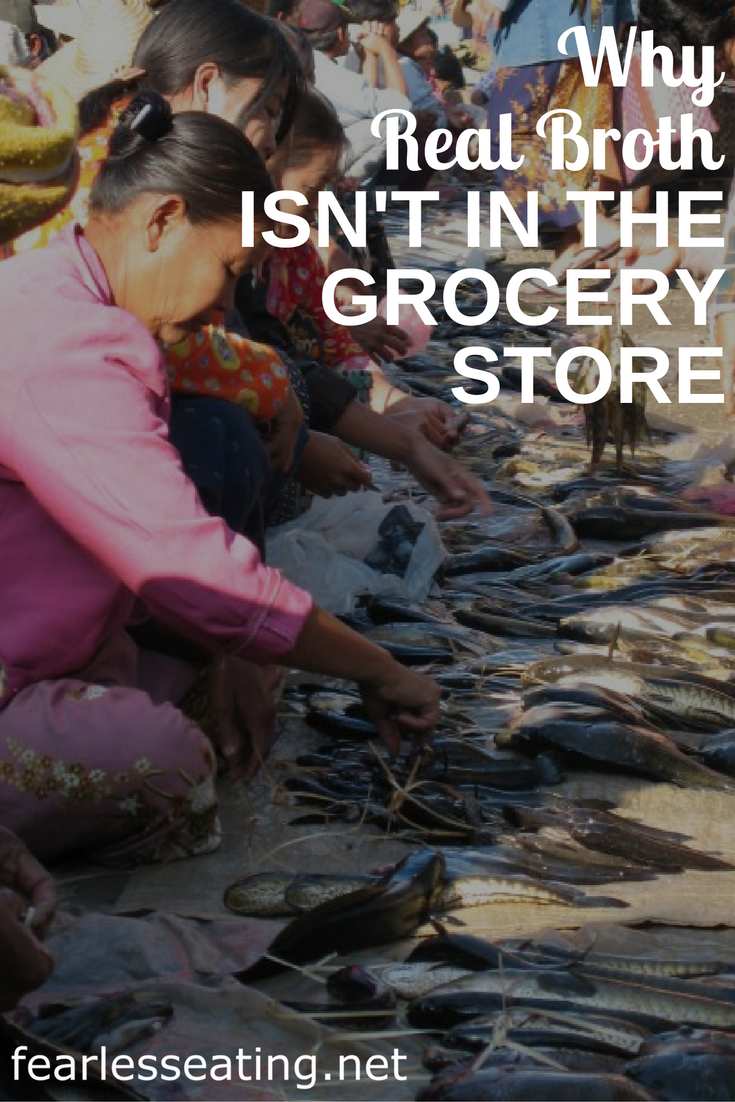