When I first saw Pumpkin Swordfish many years ago, I thought to myself, are you kidding me?! Not even seafood can escape pumpkin marketing in the fall?! Have we sunk so low in our food culture that we’re now going to artificially color and flavor swordfish just to make it look and taste like pumpkin? Is nothing sacred anymore? Thankfully, I quickly learned that pumpkin swordfish has nothing to do with actual pumpkins or gimmicky autumn-themed marketing. Phew!

What is Pumpkin Swordfish?

As you may know, the flesh of swordfish is typically a whitish-gray color. However, there are times when some swordfish consume a diet primarily of shrimp and krill. This turns their flesh into a darker orange-colored hue. Thus, the name pumpkin.

Let me show you the difference!

Where to Find and Buy Pumpkin Swordfish

Because they’re rarely caught, they’re hard to find. Your best option is through a local fishmonger or an online supplier. I bought pumpkin swordfish from The Local Catch in Rhode Island. They’re a great company, committed to sourcing only sustainably-caught seafood from local fishermen.

Besides wild-caught swordfish, you’ll find a wide range of in-season fish and shellfish from the waters of southern New England. They offer a CSF (Community Supported Fisheries) option, sell at local farmers’ markets, and also do home deliveries in the southern New England area. You can regularly check their online offerings but you can also contact them and put a request in for pumpkin swordfish when it shows up.

If you don’t live in southern New England, ask your local fishmonger. Another option is to try to find an online seafood company that ships to your area. Buying direct via online outlets is often a better way to support local small-scale fishermen than purchasing seafood in supermarkets. The quality is often much better and fishermen earn more from your direct purchases than by selling through a middleman. Check out the Seafood Finder here, plug in your zip code, and you can find good quality online seafood suppliers in your area.

Thankfully, it does not taste like pumpkin. Because that would be really weird. Rather, its dark hue from a crustacean-rich diet means it has a higher fat content which results in a rich, buttery flavor. In other words, it tastes exactly like regular white-fleshed swordfish but better. And that’s saying a lot because swordfish is absolutely delicious, pumpkin or not.

For this reason, pumpkin swordfish is considered a delicacy and fetches a higher price than regular swordfish.

It would make a great fit in many of the seafood soup and stew recipes in my next cookbook, New England Soups from the Sea. For example, it would be a fantastic addition to seafood stews such as an Italian Zuppa di Pesce, a Spanish Zarzuela, or my New England-themed Cioppino or Bouillabaisse. You could certainly use it in place of bluefish in my Bluefish Chowder. It would also make a fine addition to any of the fish soups in the Brothy Soups chapter of my cookbook. You might also find a good use for it in one of these seafood soup recipes from around the world.

But to be honest, if you’ve never had it before, it’s best to capture its unique flavor by keeping things simple and grilling or pan searing it. You can never go wrong with butter, lemon, salt, and pepper. A basic spice rub is fine too, like a lemon pepper seasoning or an Old Bay type of seasoning. Here’s a simple pan-seared recipe to show off its incredible, rich flavor. Enjoy! 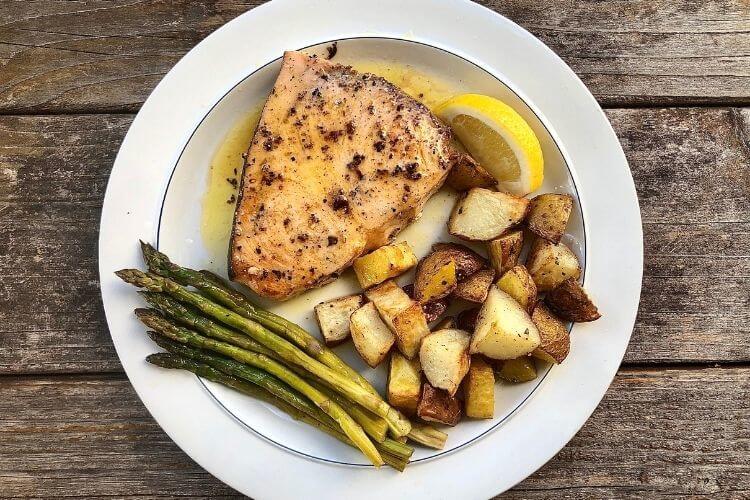 A simple seasoning and a quick pan sear is an ultra-easy but nonetheless delicious method for cooking pumpkin swordfish.

For the pumpkin swordfish steaks

For the lemon butter sauce

Instead of melting the butter, you can simply place butter pats on top of the swordfish when it’s resting. The butter will melt right over the steaks. Season it with lemon juice just before serving.

Add any fresh herbs to the steaks, such as chives, parsley, or basil. 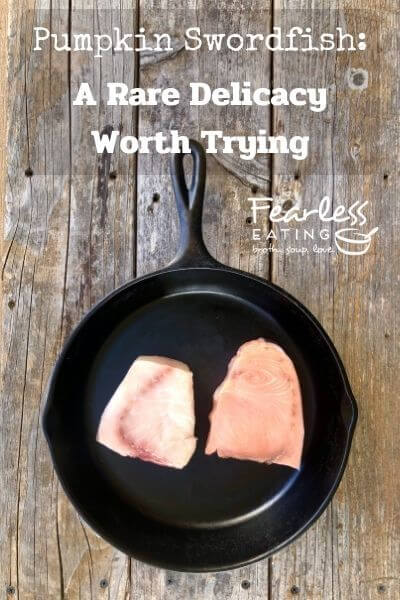