Poor man’s lobster usually refers to one of two things. The first is monkfish. Its dense, firm meat is often compared to the texture of lobster meat. The second is a poor man’s lobster recipe which actually is not made from lobster. The recipe name is a bit of a joke because we all know lobster can be quite expensive. Of course, the irony is that lobster was once considered a poor man’s food. How times and food trends change!

What is a Poor Man’s Lobster Recipe?

Poor man’s lobster is made from whitefish. The fish is cooked in a solution of boiling water, sugar, salt, and lemon which firms and flavors the fish into a lobster-like texture and taste. It’s then served with a side of butter and lemon, the two classic seasonings for lobster.

In a way, it’s really like a mid-Western fish boil recipe. You can serve your Poor Man’s Lobster with classic fish boil sides such as corn on the cob, potatoes, onions, and bread.

To be perfectly honest, it doesn’t taste exactly like lobster. Let’s face it, nothing does. It’s sort of like the imitation crabmeat version of lobster, but healthier! And with the butter and lemon, it really is quite delicious. And super easy and fun.

Why You Should Use Monkfish

Instead of cod, which has been tragically overfished, try a whitefish in the cod family such as Atlantic pollock, hake, or haddock. And instead of halibut, which has been overfished in the Atlantic ocean, try striped bass or dogfish (though this is still rare to find in markets). Pacific halibut is a good choice too. Bluefish, though technically not a whitefish, is another good choice for its full flavor.

Trust me, you want extra butter and lemon in every bite. A fork just won’t cut it here.

Gobs and gobs of glorious butter.

I call it liquid gold.

And please don’t fear the butter. It’s good for you.

The seafood seasoning is optional. (Butter and lemon are not!) You could use a little salt and pepper too. I really like this Frontier Co-op Seafood Seasoning blend. It’s like the organic version of Old Bay seasoning.

How to Make Poor Man’s Lobster

Yes, I shot a video recipe for how to make Poor Man’s Lobster! You can also scroll down below the video for a quick summary of steps and a printable recipe.

Cut your whitefish into approximately bite-sized chunks (about 1-inch by 1-inch).

While the fish is cooking, melt half of a stick of butter in a saucepan and cut a lemon into wedges.

When the fish is done, use a slotted spoon to remove the pieces and place them on a paper towel-lined item.

Plate the fish and serve with the sides of butter and lemon. Sprinkle with any seasoning you want like Old Bay, Frontier Co-Op Seafood Seasoning, or a lemon pepper seasoning.

For a full meal, serve with sides such as rice, potatoes, corn on the cob, onions, and greens. 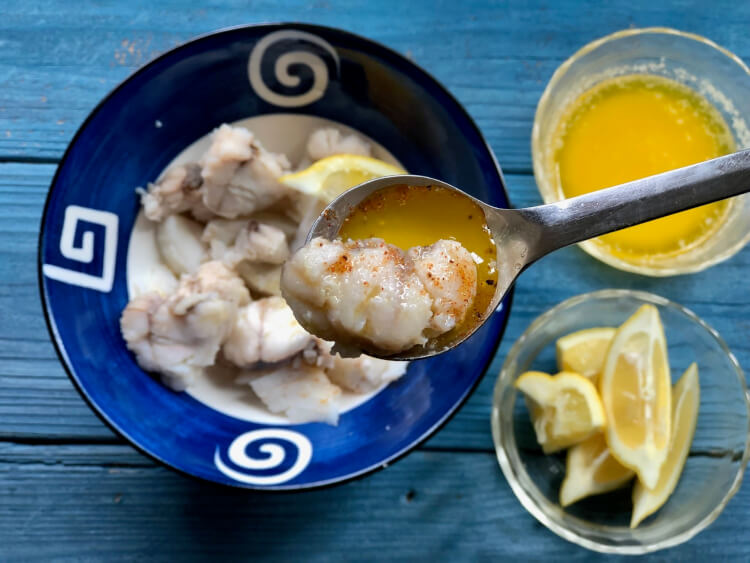 Poor man's lobster is made from whitefish boiled in a solution of sugar, salt, and lemon to give the meat a lobster-like taste and texture. It's super easy and delicious! 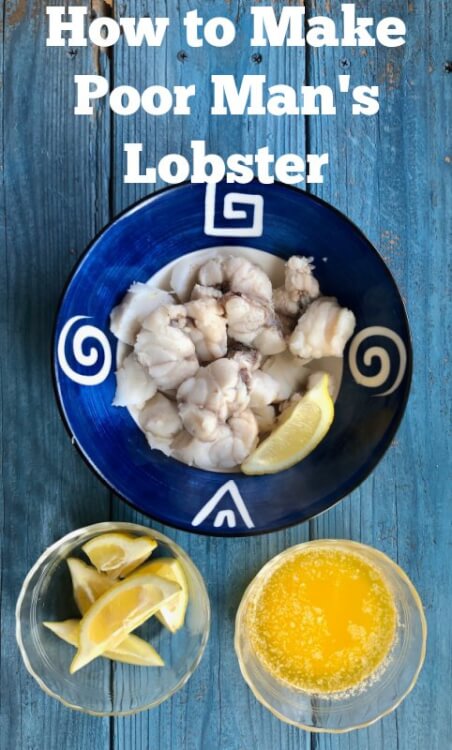