And I found what I was looking for in Maryland.

Maryland and the whole Chesapeake Bay region are famous for their blue crabs and there are dozens of crab-based recipes. But when it comes to soups and stews, there are mostly two different styles – a creamy version, almost like a chowder, enhanced with sherry and Old Bay seasoning, and a brothy tomato-based version with lots of vegetables. Today’s recipe is inspired by the former. I put a New England twist on it by using local New England crabs and making a few other minor changes.

There are two basic steps to make it. But it’s the first step that’s the most important.

A byproduct of making crab stock is that you’ll also get the crab meat that you’ll use in the crab stew. This will save you some moola because canned crabmeat is not exactly cheap.

Most crabs in seafood markets (including the seafood counter at your supermarket) come as pre-cooked and frozen crab legs. In that case, all you need to do is thaw the crab legs and then crack the shells and pick out the meat. You’ll then use the shells and carcasses to make your stock.

If you do have access to fresh whole crabs, you’ll have to cook or steam them first and then pick out the meat.

Now I’m not going to lie. Whether using frozen pre-cooked crab or fresh whole crabs, this is a time-consuming step. Picking out the crab meat from crab shells is tedious, to put it mildly. Make it a group effort, if possible. You’ll probably want to do it a day in advance of making the crab stew. But it is SO WORTH IT.

There are NO bottled crab stocks sold in stores and even if there was, it would pale in comparison to a homemade crab stock. The same goes for any type of bottled or boxed seafood stock. And a homemade crab stock really is the key to this recipe. It adds a depth of flavor that elevates it beyond the legions of seafood soup recipes (including most chowders) that don’t use stock as a base. That background fresh sea essence flavor makes such a difference.

And the crabmeat will taste better too! Most canned crabmeat comes from Asia, especially Indonesia. It not only lacks flavor but do we really need to be importing crab meat from Asia when we have delicious and abundant crabs right here in America?

And yes, that includes New England. Though not historically a region known for its local crabs, that is starting to change. The Jonah crab, New England’s local crab, is a medium-sized crab with meaty claws and a delicious, tender, sweet meat. It’s also quite affordable compared to other types of crabs – blue crab, Dungeness, snow crab, etc. It’s slowly starting to gain recognition and slowly showing up in local markets.

I purchased four pounds of New England Jonah crabs for the crab stew recipe which yielded a good amount of meat. The picked-over shells are pictured on the right and the crabmeat on the left.

I got about a pound and a half of crab meat. That’s pretty good! It took me about an hour to pick out all the meat from the claws.

And then I made the crab stock. Here’s how to make it:

Once you have your crab stock and crabmeat, the crab stew comes together very quickly.

Prepare the Remaining Ingredients and Make the Crab Stew

That’s everything you’ll need in the picture above. Ignore the potato starch. I decided not to use it (see reason below). So we’ve got the crabmeat and stock, an onion, half and half (heavy cream is fine too) and then the rest is seasonings – lemon juice, seafood seasoning (similar to Old Bay), dry sherry, and parsley. The printable crab stew recipe below will detail the steps. It’s VERY easy. And UNBELIEVABLY DELICIOUS. But only when you do (or rather don’t) follow one last thing…

Do NOT use a Thickener

I mean no disrespect to those in the Chesapeake region but I was kind of surprised to find how many online recipes did NOT use crab stock and also thickened it with a roux or cornstarch. I’ve had enough overly pasty, flat-tasting New England chowder in my day to know not to do this.

But of course, I was curious. So I took just a little potato starch (which is similar to corn starch) and thickened a small amount of the crab stew. My instincts were correct – it totally obscured the flavor of the crab stock.

Bottom line: don’t use any type of thickener! Yes, it will have a slightly thinner texture than a thick, chunky style stew but all the flavors will meld together so much better – the crab stock, the cream, the sherry, and the other seasonings as well. Every spoonful will leave you craving more. It sure did for me. I can’t even begin to explain how much I loved this recipe. Maybe one day it will catch on in New England and become a thing! 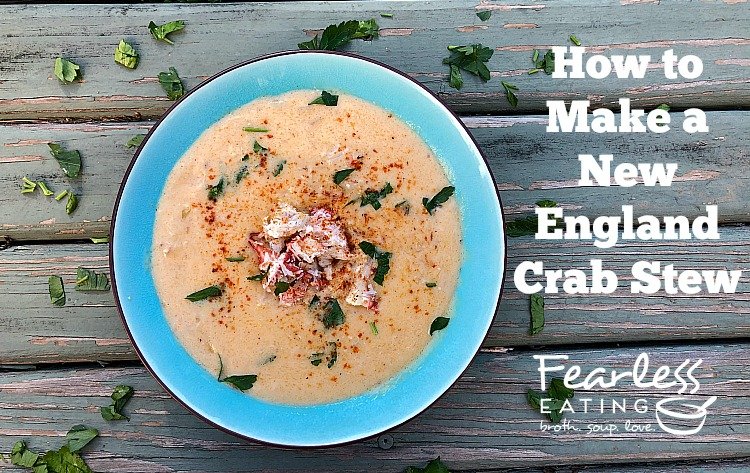 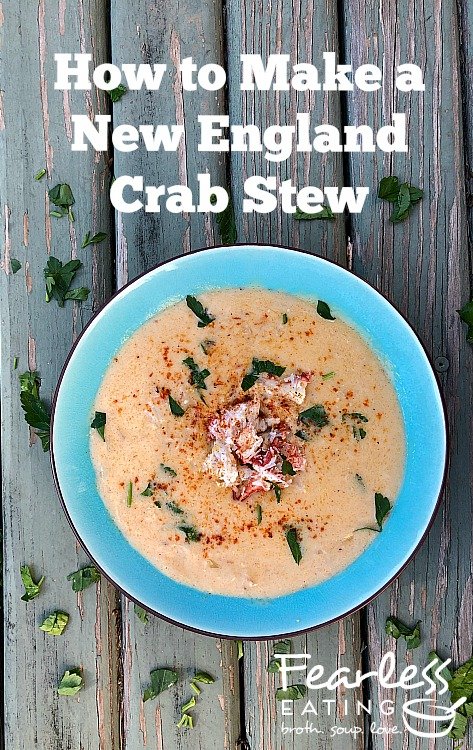