This monkfish soup recipe is inspired by my love of Southeast Asia. The ginger, lemongrass, lime, and cilantro give the broth a southeast Asian-inspired feel without it being a true Southeast Asian soup. Adding fish sauce and chiles (and perhaps galangal instead of ginger) would bring it more into that realm. But I wanted to tone things down a little. Why? Because this monkfish soup recipe is included in my cookbook, New England Soups from the Sea.

Though it’s not a traditional New England soup recipe, it’s included in the Brothy soups chapter, where I feature local New England fish and shellfish in more contemporary recipes.

Certainly, you could choose another whitefish in this monkfish soup recipe. But I chose monkfish because it’s a sustainable fish species here in New England. And part of the mission of my book is to shine the spotlight on more undervalued fish species. These are species that are highly sustainable and abundant in New England waters and yet, don’t have as big a market value as more familiar (and often overfished) species like cod, haddock, and salmon.

I also LOVE the flavor of monkfish. Some say it tastes a little like lobster. In fact, it’s often referred to as poor man’s lobster. Its texture is meaty and firm and for that reason, it makes a great addition to any fish soup or stew. It holds its shape whereas some flakier whitefish will fall apart in the broth. In general, I prefer meatier, stronger flavored fish in brothy soups. Stews and medleys tend to work better with mild, flakier fish. But that’s not a hard and fast rule. Just my personal preference.

If you can’t find monkfish, then halibut and striper would be two excellent choices instead.

How to Make the Fish Broth

Making a homemade fish broth (also called fish stock) for your monkfish soup is the difference between a great fish soup and just a good one. Sure, you can make a good recipe with store-bought fish stock or even a substitute for fish stock (like clam juice). But for a truly memorable, soul-stirring recipe, I’d encourage you to learn to make a homemade fish broth. This is always the best option. For a review of all the different options, including a video for how to make it, check out my post, Fish Broth: How to Make it, Best Brands, and Substitutes.

My recipe serves about 4 to 6 people, depending on appetites. Most of what you’ll need is pictured above with the exception of a little wine, fish broth, olive oil, and salt. The exact ingredients and amounts are in the recipe card below.

As mentioned above, if you can find fresh galangal (also known as Thai ginger), it would make an even better choice than ginger. It has an equally pungent aroma but not as sharp a flavor. Some people describe its scent as a pine forest.

You could also substitute lemon for lime. However, I think the mild sweetness of both the butternut squash and the monkfish make this an even better pairing for lime. And lime tends to go really well with Southeast Asian herbs and spices. I always have both lime and lemon in my fridge so I can taste which one I like better. In this recipe, lime was the clear winner.

Finally, keep in mind, that like any true southeast Asian soup, with its liberal choice of side seasonings and condiments (think Vietnamese pho), YOU decide how much lime you want to add. Start with 2 TBSPs. Taste and add more to your liking or allow each person to add additional lime juice to their bowl. I think a full 4 TBSPs (about the juice of a 1 lime) in the full recipe is just about right. 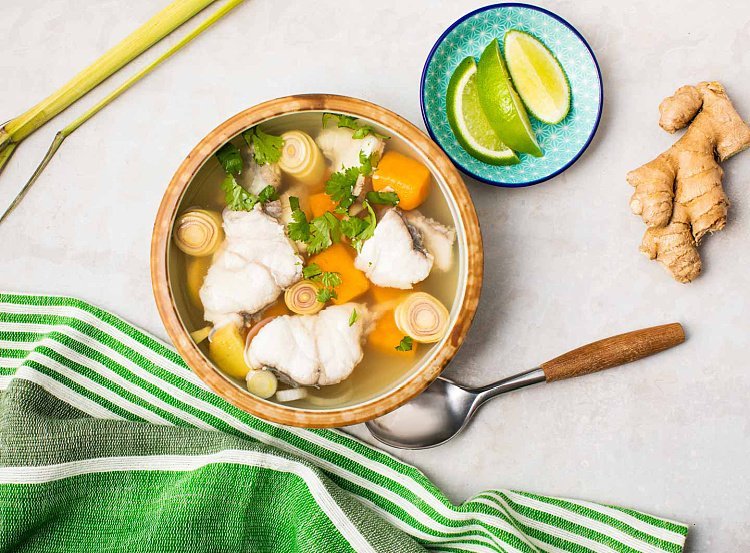 More Soup and Stew Recipes to Try with Monkfish 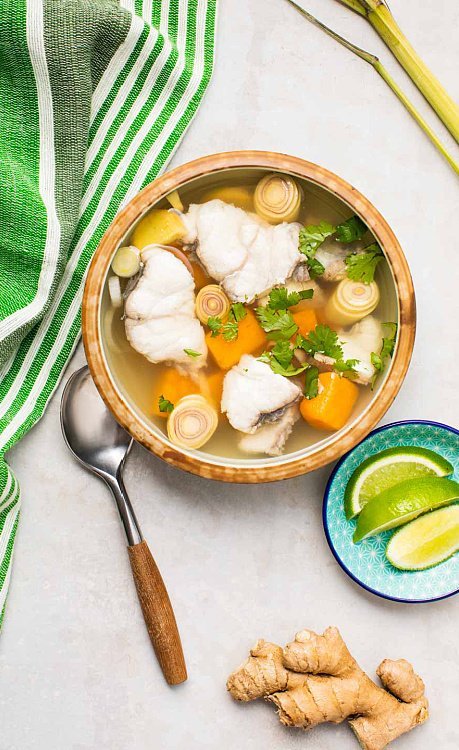