How to Make Flavorful Broths in Only 45 Minutes

If you’ve been caught up in the bone broth craze (as I have) you might think that in order to make really flavorful broths that you have to simmer them for hours on end. 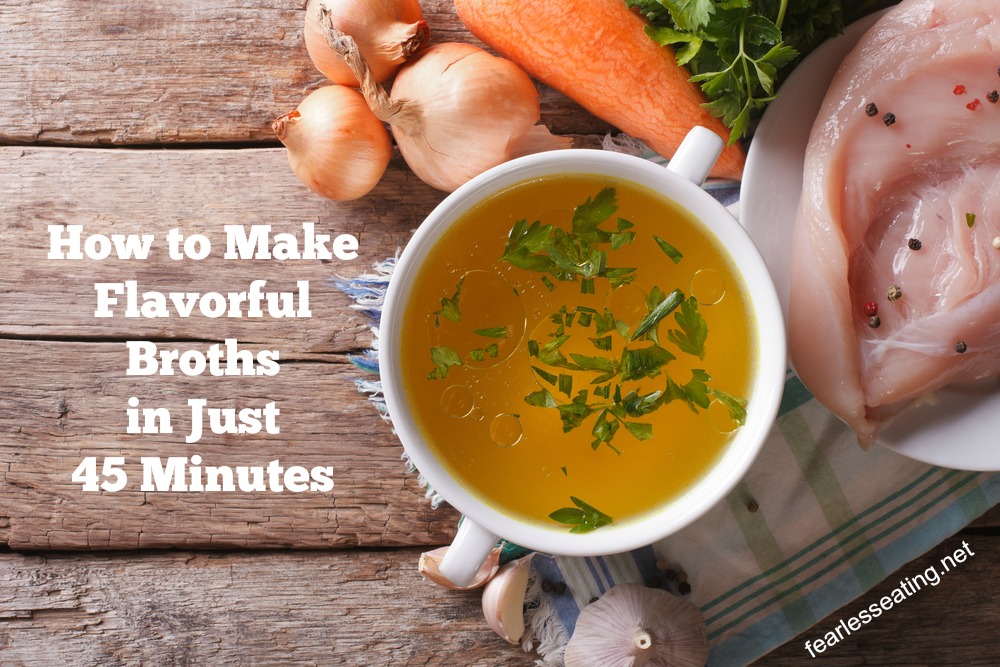 I used to think this too when I was first learning to make broths. I was following a lot of the information in Nourishing Traditions by Sally Fallon.

Stocks are Not Broths

First published in 1999, many cite this cookbook as a major influence in the farm-to-table movement. I think it also ignited much of the current bone broth trend and for good reason. Fallon focused on bone broths not just for their culinary importance in cultures all over the world but for their valuable health benefits too.

But her chapter on bone broths is titled “Stocks.” And the recipes really are stocks and not broths. Yes, there’s a difference, though definitions differ slightly depending on who you talk to.

In the culinary world stocks are simmered for longer periods than broths and contain bones with more tendons, joints and collagen-rich parts like tails, heads and feet. During the simmering process the collagen breaks down into gelatin and creates a richer, thicker liquid. Stocks are not meant to be consumed on their own but are used as a foundation for other dishes like rich sauces, gravies and aspics.

Broths however are simmered for much shorter periods and contain more meat than bones. A typical simmer time for a broth is between 45 minutes and two hours.

Rachel Mamane, in her new book Mastering Stocks and Broths, writes, “Technically, broth also refers to a stock made with meat instead of bones. Since meat does not contain binding agents, such as collagen, it requires less simmering time than bones to extract its essence. As such, broths made with meat and no bones remain fluid due to the lack of gelatin content.”

This is good news if you’re a home cook and are looking to make short-cooked broths as opposed to long-cooked stocks.

Why Broths and Stocks are Grouped Together

There’s another use for stocks that most chefs don’t know about. A long-cooked stock is rich in many nutrients that are great for many health issues, especially gut issues.

Fallon hit on these health benefits and made the connection to their almost universal use in traditional cuisines and folk medicine. Because Fallon’s book was so influential I’m guessing that her long simmering times sort of caught on as the “right” thing to do, especially in health and wellness circles.

Because gut issues have become so epidemic in recent decades, many health practitioners, writers and bloggers started gravitating towards these longer cooked stocks and calling them “bone broths.” It’s caught on and now the term “bone broth” has become sort of an umbrella term for both short-cooked broths and long-cooked stocks.

I’ve used the term “bone broth” myself as I’ve mostly been coming at it from the perspective of a Nutritional Therapist. In my book, Fearless Broths and Soups, I recommend the longer simmer times for their nutritional value and gut health benefits.

But I’ve also been learning a lot about stocks and broths outside nutrition circles, especially via my travels in Asia where shorter cooked broths are more common, and in the culinary world where a clearer distinction is made between stocks and broths.

In Mastering Stocks and Broths, which is based off the techniques used in traditional French cuisine, Mamane says, that “bone broths have recently emerged as a stand-alone category, referring to a gelatin-dense stock that is sipped like a broth.” She also says that “guidelines often contradict culinary intuition” which includes the extremely long simmer times.

In Nourishing Traditions, Fallon recommends chicken stock be cooked for 6 to 24 hours, fish stock for 4 to 24 hours and beef stock for a minimum of 12 hours and as long as 72 hours. Classically trained chefs never simmer broths that long, especially fish stocks!

The recommendation to simmer bone broths for these ultra-long periods has become so commonplace that sometimes people don’t realize there’s a place for much shorter cooked broths too. If you’re working on gut healing, keep simmering your bone broths for long periods! But if you’re more of a home cook who’s more interested in flavor and efficiency, you can make equally amazing tasting broths in a fraction of the time.

Sometimes, all it really takes is 45 minutes.

Also, to be clear, I’m talking about making flavorful broths on the stove top, not in a pressure cooker like the Instant Pot. I know people love their Instant Pots for making broths but I’m not a big fan of them.

So on that note here’s some tips to make really flavorful broths followed by an actual recipe!

1. Use more meat than bones

Or use a bunch of meaty bones too. But the meat will be adding most of the flavor, not the bones. Marrow bones or other types of bones that have been picked clean are better used for your longer cooked stocks and bone broths.

For chicken (or other types of poultry), previously roasted carcasses with lots of meat on them are great. But if you don’t have a carcass, you can used chicken legs, breasts or thighs. For beef and pork any meaty cut will do like a piece of a roast, neck bones, a shank or ribs.

Roasting brings out a wonderful depth of flavor to your broths. It’s optional and will add a little time to the process, but it’s totally worth it. To roast bones, turn your oven to 425 degrees, set the bones on a roasting pan, brush with a little oil and roast until they’re good and browned but not charred, about 40 minutes.

That said, there are some cases where you might not want to roast bones. See tip #7 below.

This is especially important for shorter-cooked broths. Aromatics contribute additional flavors in short time periods and can come from vegetables, herbs or spices. In fact, even if you’re making a longer-cooked broth, you only want to add aromatics at the end of the simmering process. Cooking them for too long can give some off flavors.

For vegetables, the most common addition is the classic trifecta (sometimes called a “mirepoix”) of onions, celery and carrots. They work well to add different depth of flavors. Onions add earthy flavors while carrots add sweetness. Garlic, leeks, parsnips, and mushrooms are other common additions.

But if you’re new to making broths, I’d encourage you to try one vegetable in particular…

I’ve been using fennel more and more in my broths and stocks and I’m really digging the delicate anise flavor. In Mastering Stocks and Broths, all of the recipes use fennel in place of celery. According to Mamane, “celery tends to add bitterness to the liquid” but fennel helps to “balance the sweetness of carrots and pungency of onions.”

It’s often recommended when making longer cooked stocks and bone broths to keep the liquid at such a gentle simmer that you can barely see evidence of it. Sometimes this is called making your broth “smile.” The purpose of this to keep your broths from getting cloudy and for keeping them gelatinous. But for shorter cooked broths, this isn’t really necessary. A light boil is fine. I find this will bring out more flavors in a shorter time period. In Asia, they often aggressively boil their short-cooked broths.

6. Make your broth and your soup together

We typically make our broths separate from our soups here in America. But in Asia, it’s commonplace to simmer a few meaty pieces with other aromatics and herbs at the same time, thus creating your soup all in one shot.

7. Make soups whose main flavors are not dependent on the broth

One time I made a beautiful chicken broth that was heavy on the chicken flavor. I roasted the bones, simmered it quite a while, cooked it down and just made a divine tasting broth.

I used it as a base for a tom yum soup (a Thai hot and sour soup) and was surprised at the results.

The chicken flavor totally overwhelmed the lemongrass, galangal, kaffir lime and other ingredients that are essential to tom yum. Tom yum requires a very lightly cooked broth so that the aromatics, the lime, chiles and the fish sauce meld and balance together. In this case, and in the case of many similar soups you don’t want overly flavorful broths.

Knowing what you’re going to use your broth for ahead of time will help you dictate how to prepare it. So in this case, I would NOT have roasted the bones.

Most people new to making broths start with a chicken and/or beef broth. Totally fine! But few people think of fish broth. It’s actually the easiest broth to make because you never want to simmer fish bones for more than an hour otherwise it tastes too fishy. It’s also the cheapest broth to make as most fishmongers will practically give away fish bones/carcasses for free.

You can even make a somewhat gelatinous fish broth in short time periods if you include fish heads, as the collagen in fish will leach out more quickly than in large bones from land-based animals.

See my post for making fish broth which includes a how-to video.

9. Taste as you go and cook that baby down!

You may find that all you need is 45 minutes to develop a nice, light flavor. You may need a little more time, maybe as long as two hours. Always taste your broth as you go until you’re happy with it. If you find it’s not quite developing enough flavor, even after a few hours, it may be because you’ve added too much water. Continue to cook it down. The flavors will condense as the water evaporates.

I’ve had so many people tell me that their broths don’t taste very good and when I ask them if they’ve salted the broth the almost universally say “no.”  Salt is magic!

Longer cooked broths will take on a natural salinity but for shorter cooked ones you’ll almost certainly need to add some seasoning for more flavorful broths and soups. In the case of many Asian broths and soups, this could certainly include salty seasonings like fish sauce or soy sauce. 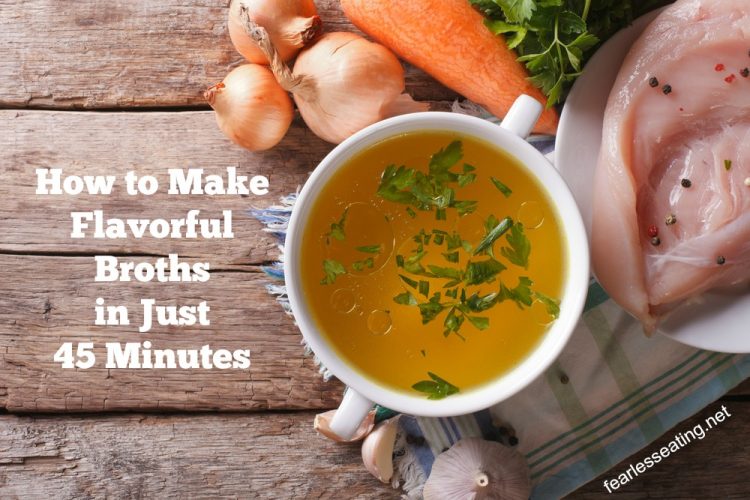 A short-cooked broth with lots of flavor. 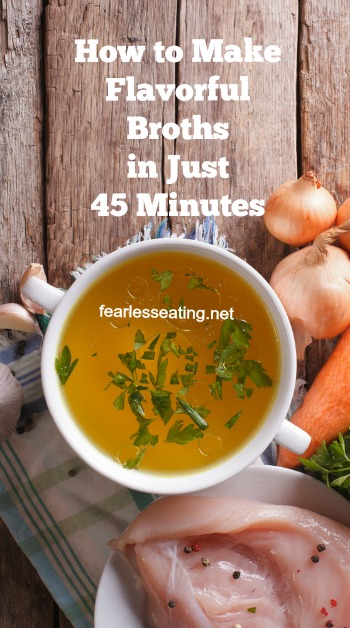 Fearless Eating may receive commissions from purchases made through links in this article. As an Amazon Associate I earn from qualifying purchases. More info here.
Pin424
Share17
Yum
Tweet
Follow