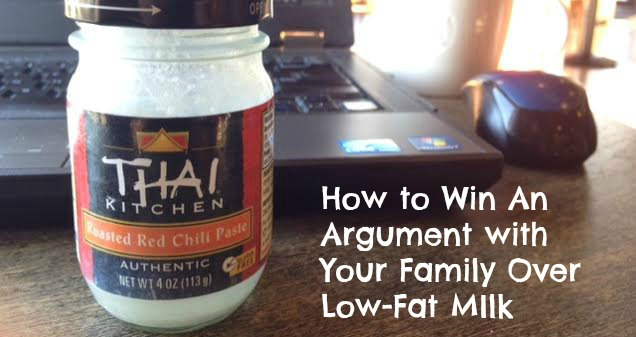 I know, that’s a strange photo.

What in god’s name does a vial of Thai Kitchen roasted red chili paste have to do with a family argument over low-fat milk?

Well let me tell you!

So I’m visiting my family here on Long Island for Thanksgiving weekend.   It’s been nice to get away but of course, I can never get away from my computer for too long these days.

I’m nestled in this Starbucks (chillax you Starbucks haters, there was no other options) having an overly bitter coffee trying to catch up on things.

Now regardless if I’m in a Starbucks on Long Island or some local, independent coffee shop in Northampton (feel better Starbucks haters?), you’ll ALWAYS see me with a small jar like that Thai Kitchen one.

I save little glass jars like that one and fill ’em up with raw cream to add to my coffee.

But I SO LOVE my coffee with real, raw cream.

Of course, that means I had to bring my raw cream (and milk) with me from Massachusetts and as usual, that created a little stir at the dinner table last night.

One thing leads to another in conversation and all of a sudden my family is accusing me (as usual) that my love of butter and cream and bacon is going to clog my arteries and that I should see a doctor and get my cholesterol tested and blah blah blah blah blah.

So I try to explain (uselessly as usual) that these are the foods people used to eat before the 20th century and that no one died of heart attacks and that there wasn’t the obesity epidemic of today and that the Lipid Hypothesis has been thoroughly disproven and of course, like clockwork, another family member utters the ultimate generic response to that:

Seeing as how I was not going to win the argument, I went for a different angle.

The Days of the Milk Man

I remember my mother saying that when she was a kid growing up in Westbury, Long Island, that the milk was delivered by a milk man.

I asked her and everyone at the table (which included my aunt, uncle and father) if they remember the cream at the top.

They all said yes.

So I run out to the refrigerator, bring back my glass jar of raw milk and smack it down in the center of the table.

I point to the cream at the top.

“You all see that!” I obnoxiously proclaim.

I then tried to explain why that cream is so healthful – that that’s where the fat-soluble vitamins are located, that the fats help absorb the calcium and minerals, that there are healthy probiotics in that milk, that there are enzymes and amino acids and conjugated linoleic acid (which has been shown to promote weight loss) and so on and so forth.

Think I won the argument?

Out came the “yeah buts” in full force.

So I made my last stand.

I poured out a little of the milk and asked everyone to taste it.

Here were a few of the reactions:

“Mmmm, that IS good” said my aunt.

Of course it was good!

Now do you think I finally convinced anyone?

Has anyone in the history of the world ever won an argument with a fellow family member?

I wasn’t about to be the first… unfortunately.

But even though no one could admit it, I’m still declaring myself the victor.   I don’t care what anyone says, I WON.

If food tasted good, it was Nature’s way of saying it was good for us.

My family would never say it, but when they admitted that the milk tasted good, they declared me the winner.

At least that’s how I’m interpreting it.

Actually, that’s not the point at all.

The point is that contrary to popular belief, full-fat raw milk can work wonders for your health.

The Problems with Low-Fat Milk

Here’s a short summary of my argument:

So did I convince you that low-fat milk is not a health food?

I know, probably not.  Three minutes is not enough time to cover all the problems with modern-day low-fat milk.

How Milk Can Stop Heartburn

But I do discuss it in detail in my ebook, The 30-Day Heartburn Solution, and explain how you can use raw milk to stop an episode of acid reflux (as well as other digestive problems).

In fact, before the age of Tums and acid blockers, it was actually a common folk remedy.  That’s just one of the many reasons I consider real, raw milk from grass-fed cows one of the five pillars of traditional foods.

So let me win the argument for you.  It’s called the Oprah effect.  No matter how much wisdom we have to share with our loved ones, they won’t listen until they hear the same exact advice from an outside source (which is often a famous TV personality).

Oh the tangled web of family dynamics!  We all got ’em, self included. 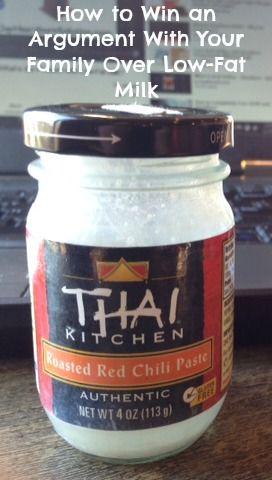