It’s not hard to make a lobster ravioli sauce. There are many suitable choices from tomato-based sauces to pesto to alfredo to a brown butter sauce. But I think a light garlicky cream sauce with hints of wine, herbs, and lemon is the perfect choice for lobster ravioli.

It’s quite easy to make and most recipes for this type of light cream sauce are good. But I’ve noticed that they tend to skip out on a few key ingredients. One of my favorite all-time quotes about cooking sums it up…

Remember this caveat for all cooking:  Whenever you save money, time, labor or unpleasant emotions, it almost always comes at a cost of flavor.

All you have to do is one thing.

Buy a fresh, whole lobster! Preferably the American lobster species from New England (most come from Maine). This is where the extra time, money, and labor come in. But it’s nothing crazy. The price of a lobster fluctuates a lot depending on the time of the year. But if you get them in season, they should cost around $12-$15 per pound. And making a lobster ravioli sauce with a whole lobster will only add about an extra half hour from start to finish.

A whole lobster will contribute three things to the sauce that creates a deep lobster flavor.

First, and most obvious, the lobster meat. Second, the carcass can be used to make a lobster stock (though clam juice is a suitable substitute). And third…

If you’ve ever had a whole lobster, you’ve probably seen a pasty green substance in the cavity. It’s called the tomalley. It’s a digestive substance and it’s not the most appetizing-looking food in the world, to put it mildly. It will most likely cause some unpleasant emotions. Perhaps even shock and horror. Most people are completely grossed out by it and don’t dare to eat it. It can frighten small children.

But some hardcore lobster-loving New Englanders view it as a delicious delicacy. I happen to be one of them (the name of this blog is not just about my last name ). It has an intensely concentrated lobster flavor. It’s often added to soups and sauces for an extra kick of lobster flavor (see my Maine Lobster Stew recipe for a good example).

Of course, that includes a lobster ravioli sauce! The tomalley can elevate the sauce to a realm where it tastes so darn good that it can literally quiet the mind and deepen the appreciation and enjoyment of the meal. Great food is like that.

But again, the tomalley is not for the faint of heart. Here’s what it looks like in the cavity of a fully cooked lobster…

You’ll see the tomalley when you remove the lobster tail from the body. It’s usually more of a greenish color but sometimes it’s a greenish-yellowish color. Simply scoop it out. You’ll get a few tablespoons.

Or just ignore the tomalley. You can still make a fine-tasting lobster ravioli sauce without it. Just not the best ever.

Finally, if you are lucky enough to get a lobster with the coral inside (the roe of a female lobster) you can include that in the sauce too. It’s a fairly dense, dark red substance that you’ll also find in the cavity of a cooked lobster. It’s not nearly as off-putting in appearance as the tomalley. Unfortunately, I did not get any coral in my lobster or this recipe.

First, I’d highly recommend making a lobster broth (also called lobster stock) from the lobster carcass. It will take a little extra time. But it’s really not that essential because only a small amount is included in the recipe. In this case, some bottled clam juice is a suitable substitute.

Second, I used white wine but I really wanted to use a little brandy or sherry (which I forgot to pick up). They both contribute a bright acidity but the liqueurs add a deeper, sweeter flavor. Brandy and sherry are common additions to seafood soups like lobster bisque. I’d recommend either one over white wine.

Like soups, sauces will often taste better the next day as the flavors are allowed to sit and integrate. It’s called aging or curing. That is certainly true of a lobster ravioli sauce made with real lobster meat, stock (or even clam juice), and the tomalley.

Here’s everything you’ll need. Ingredient amounts are listed in the recipe card below.

To prepare the lobster:

Step 1. Boil or steam the whole lobster for about 7-8 minutes. Remove and place in an ice bath to quickly cool it down.

Step 2. Twist and remove the lobster tail from the body. You should see the tomalley inside the cavity of the body. Remove it with a small spoon and set it aside.

Step 3. Slice open the tail with a pair of kitchen scissors and remove the tail meat. Using a pair of lobster crackers, remove the claw meat from the claws.

Step 4. Dice the lobster meat fine and set it aside.

To Make the Sauce:

Step 1. Heat the butter in a saute pan over medium heat. Add the shallots and saute for a few minutes.

Step 2. Add the garlic and thyme and saute one more minute.

Step 3. Add the white wine (or brandy or sherry), raise the heat to high and simmer until it’s reduced by half, about 3 to 4 minutes.

Step 4. Reduce the heat to medium. Add the lobster broth (or clam juice) and simmer for another minute. Add the cream and tomalley (and coral, if your lobster has it). Stir and simmer for 30 seconds.

Step 5. Add the parmesan cheese and stir in. Add the lobster.

What to Do If You Can’t Find A Whole Lobster

If whole lobsters are not available where you live, you can actually order a fresh whole lobster, delivered right to your door. Lobster Anywhere sources sustainably caught live lobsters from small-scale Maine lobstermen and lobsterwomen. They then pack the live lobsters in a special container to keep them fresh and they can ship them overnight to anywhere in the country.

It’s a great service to use for any special occasion where you want to make a lobster dish using a guaranteed fresh, high quality lobster from Maine (unfortunately, not all lobsters sold in supermarkets are super fresh). 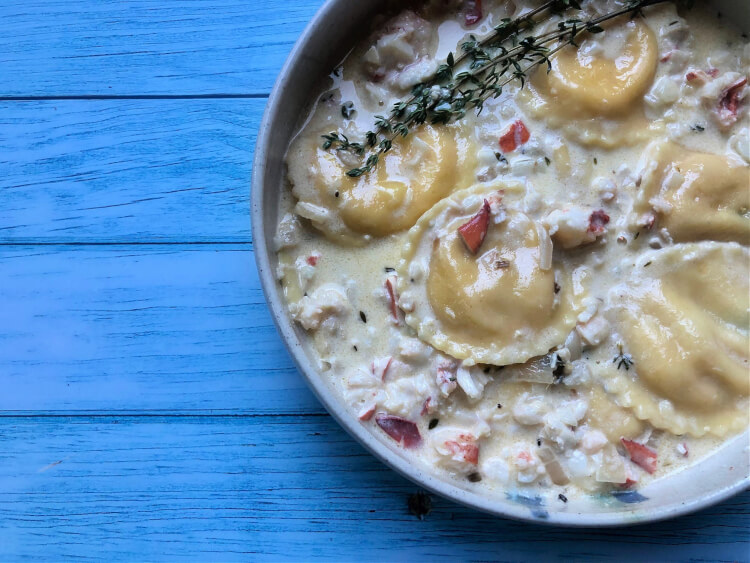 This homemade lobster ravioli sauce is the perfect complement to lobster ravioli. It's made with a few key ingredients that gives the sauce a pronounced lobster flavor.

For the whole lobster: 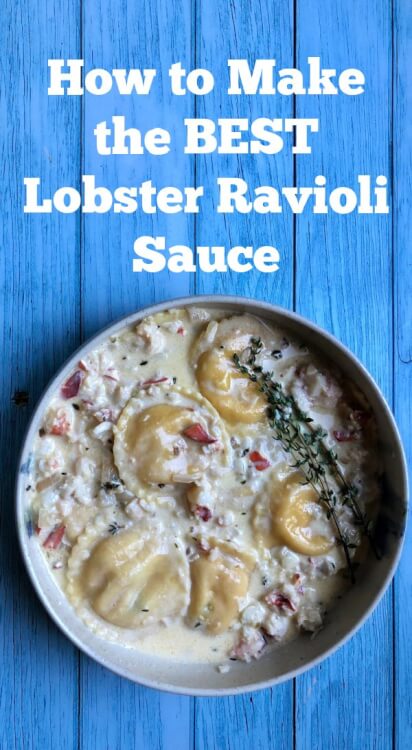