Learning how to make lard at home is so easy it’s unbelievable. In my last post, I gave you seven reasons you should eat lard. And in this post, I’m going to show you how to make it. Because chances are, making lard at home is not something your mother did growing up. Well, at least if you’re my age.

I was born in 1974 and never once growing up did my mother cook with it. Nor do I think my grandparents cooked with it much either.  In fact, I asked my father recently if my grandmother used lard when he was growing up and he said, “You mean Crisco?  Yeah, she used a lot of that.”

Why we stopped eating lard

Lard was quickly disappearing from most American households following World War II due to many reasons – the increasing reliance on supermarkets as our primary food source, competition and clever marketing from the vegetable oil industry, and increasing health concerns over the use of traditional animal fats.

By the time my generation was growing up in the 1980s and 90s, lard had become an almost unspeakable four-letter word.  To this day, just uttering the word “lard” evokes thoughts and images of obesity and clogged arteries.

However, as the dust settles on our massive industrial food experiment, the truth is slowly revealing itself.  And what we are learning is that the true cause of heart disease and obesity has nothing to do with traditional fats like lard and everything to do with processed foods and processed fats like corn, cottonseed, canola, and soybean oils.

I refer to those four fats as the “quadruple bypass” not only due to their association with heart disease but also because anytime you see them on a label, bypass them!

Crisco, by the way, is hydrogenated cottonseed oil.

If you are new to this perspective, I’d recommend you check out The Oiling of America which details why traditional fats like lard went out of fashion and why the vegetable oil industry took over.

A Re-Birth of Healthy Fats

However, the good news is that slowly but surely, traditional fats are coming back into fashion.  Margarine sales are steadily declining and even the FDA is considering banning trans fats.  Butter is back.  Coconut oil sales are skyrocketing.

In fact, lard has so thoroughly disappeared from our kitchens and supermarkets that you may not even know what lard is!  That’s OK.  I didn’t know until several years ago either.

And now I make it myself.  Go figure.

Though I’ve seen some duck fat and some strange hydrogenated lard (don’t buy that!) product, I’ve never seen a truly good quality source in stores… yet. I say “yet” because, with the resurgence in traditional fats like butter and coconut oil, I think it’s only a matter of time.

But for now, you still have to make it yourself.

Ideally, you’ll want to contact local farmers who are raising pastured pigs. Check out the website www.eatwild.com to find farmers in your area that are raising their animals on pasture.

I paid five dollars for a pound from a local farm and rendered that into about twelve ounces.  Pretty cheap!

If you can’t find a local source, you can order lard online from various places.   The Weston A. Price Foundation puts together a great annual shopping guide of nutrient-dense foods and will surely have a list of farms that you can order from.  The guide only costs a few bucks but is included free when you become a member.

Here’s my piece of back fat that I got from my local farmers’ market.

1. Cut the fat into small cubes

2. Place cubes into a stockpot and mix in a half teaspoon of baking soda

The baking soda will ensure the lard turns a nice white color.

3.  Turn heat to the lowest setting and simmer gently for 1-2 hours.

Stir every 30 minutes or so. The fat will slowly start to melt.

If you’re working with a larger batch, this will take more like 3-4 hours.  Be careful not to boil or cook at too high a heat otherwise, the fat will burn.  You could also use a crockpot if your stove’s lowest setting is too high to ensure a very slow simmer.  Put a lid on but leave it slightly ajar to allow water to escape.

The fat will then start to turn brown and browned bits of fat (cracklings) will rise to the surface.  This is your signal that it’s done.  Remove from heat and let cool for 10-15 minutes

4. Cover a strainer with a piece of cheesecloth and strain out the lard into a glass bowl or container.

Transfer to mason jars. The cracklings can be salted and saved as a tasty treat!

The liquid lard will appear golden brown in color.

The golden brown color will fade to white and the liquid to a solid but creamy texture.

Of course, once you make lard you’ll need to use it!  I shared the book below in my last post but I’ll share it again here because it’s such a gem.  It is the only book I’ve ever found devoted just to cooking with lard:

Lard: The Lost Art of Cooking with Your Grandmother’s Secret Ingredient.

Have you ever made lard before?  Any tips or suggestions you’d like to add?  Feel free to share in the comments below. 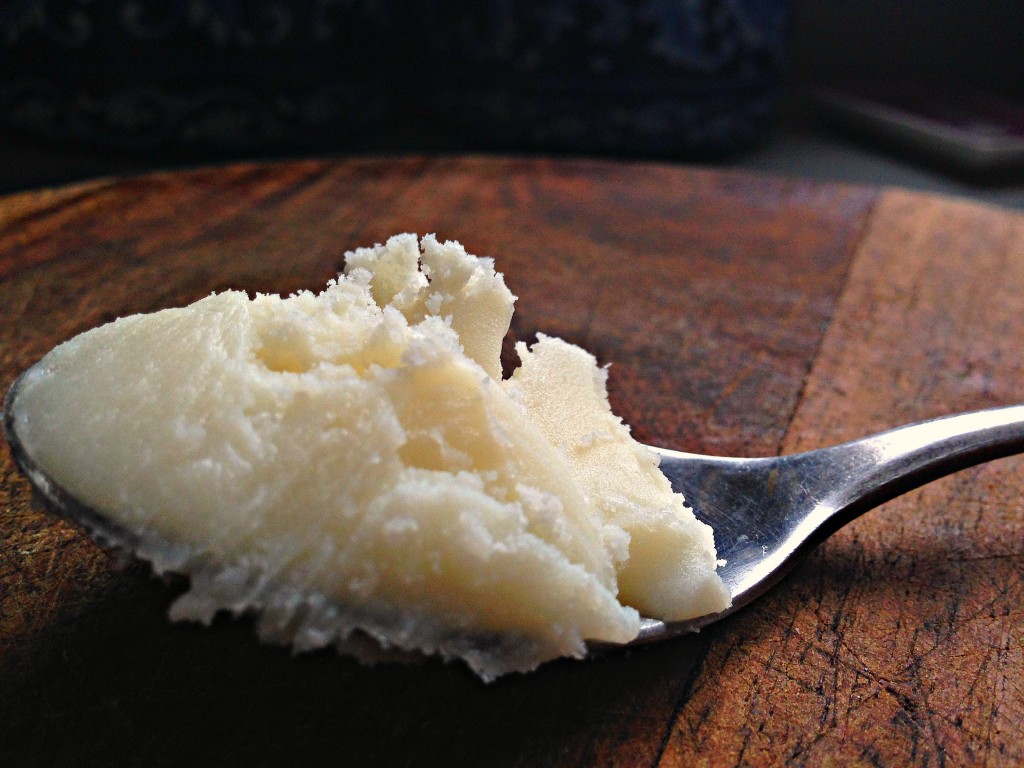 Making lard is as simple as cooking pig fat over low heat, straining it, and cooling it. That's it! 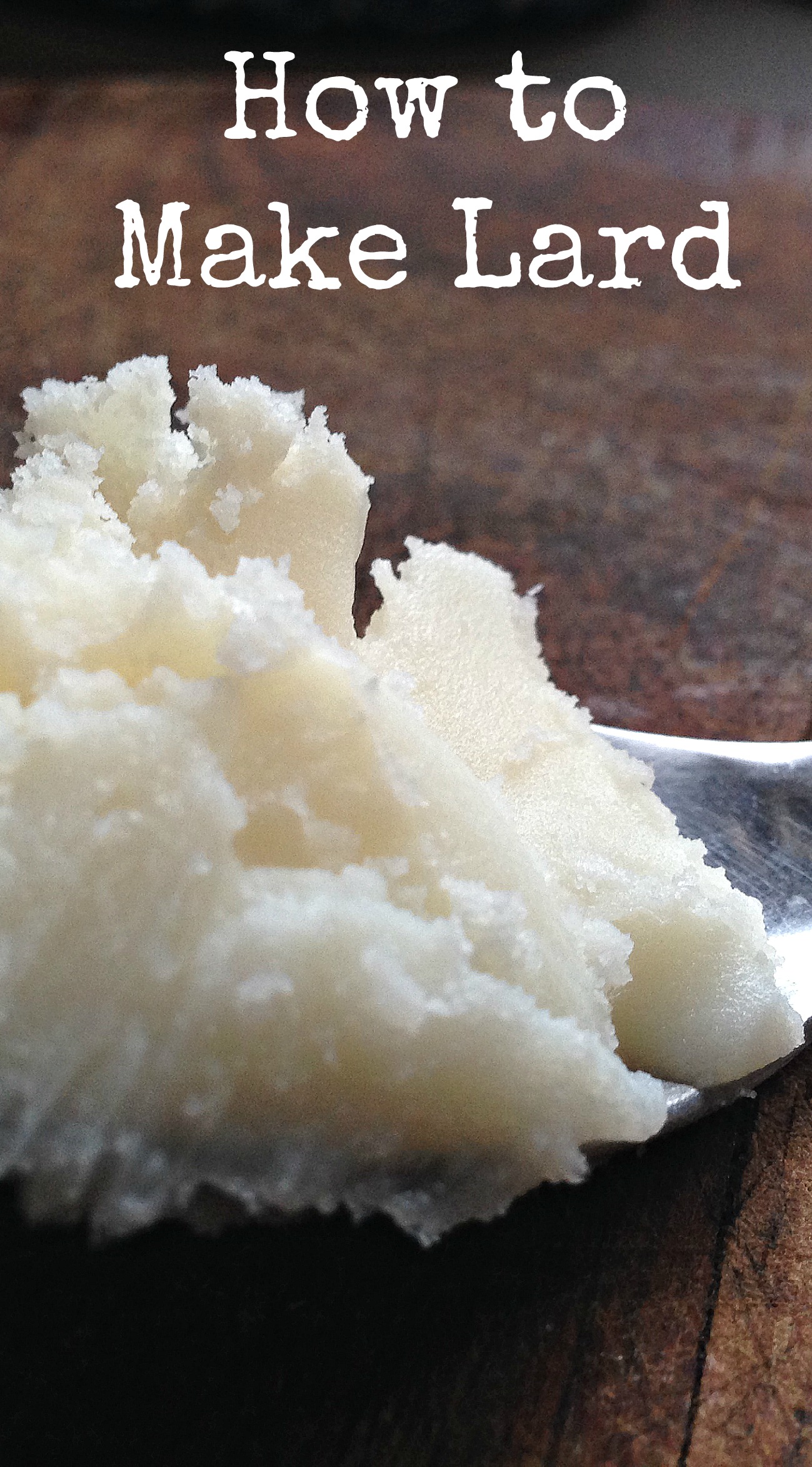