Why Michael Pollan is Wrong 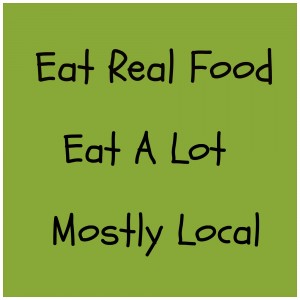 If you could encapsulate what you believe about food in three statements of three words or less, what would it be?

I’m prompted to ask this question for two reasons:  1) It’s fun and 2) Michael Pollan is wrong!

That’s right, I said it.  Michael Pollan got me thinking about this because everyone seems to love and quote his mini-tidbits of nutritional wisdom.   They’re becoming so commonly quoted that most people are unaware they stem from his writings.  Here’s a few you’ve probably heard:

“Don’t eat anything your great grandmother wouldn’t recognize as food.”

“Shop the perimeters of the supermarket and stay out of the middle aisles.”

I love them and quote them myself all the time!  And here’s probably the most popular one of all:

Truth be told…I hate it.

Don’t get me wrong.  I love Michael Pollan as much as the next real food enthusiast.  His book, Omnivore’s Dilemma, is the Silent Spring of this generation.  It raised the red flag on industrialized agriculture and it made us look harder than ever at where our food is coming from.  In so doing he has given a voice to small farms, to sustainably grown food and to everything that is good and noble and important about our food system.

His follow up to that book, In Defense of Food, condensed the message in Omnivore’s Dilemma into a more direct look at the controversial events and studies that led to our modern-day ideas about nutrition, which he wryly calls “nutritionism.”

Pollan cleverly describes the inherently flawed nature of all nutritional studies, especially those that have led to the lipid hypothesis, the theory that fat causes disease.   He attacks the forty-year government-pharmaceutical-medical-promoted war on fat, which he correctly points out has done nothing to improve our collective health.  Pollan blows apart the lipid hypothesis with sheer venom and wit:

At this point you’re probably saying to yourself, ‘Hold on just a minute.  Are you really saying the whole low-fat deal was bogus?  But my supermarket is still packed with low-fat this and no-cholesterol that!  My doctor is still on me about my cholesterol and telling me to switch to low-fat everything.’ I was flabbergasted at the news too, because no one in charge–not in the government, not in the public health community–has dared to come out and announce: ‘Um, you know everything we’ve been telling you for the last thirty years about the links between dietary fat and heart disease?  And fat and cancer?  And fat and fat? Well, this just in: It now appears that none of it was true.  We sincerely regret the error.’

No, the admissions of error have been muffled, and the recent mea culpas impossible to find.  But read around the recent scientific literature and you will find a great many scientists beating a quiet retreat from the main tenets of the lipid hypothesis.

The Elephant in the Room

Pollan contrasts the low fat mantra with nutritionism’s greatest enemy:  the almighty Common Sense.  In a chapter from In Defense of Food titled “The Elephant in the Room,” Pollan discusses the life and research of Dr. Weston Price.  Price traveled the world in the 1930s studying the diets of cultures untouched by civilization.  He found a wide variety of diets but nowhere did he find cultures eating low-fat or low cholesterol.  He found that most cultures relied heavily on animal foods be they milk, meat, or eggs and found that these foods were considered sacred for good health, child development, and fertility.  And nowhere did Dr. Price find type II diabetes, heart disease, or any of the other major epidemics that plague us today.

Of course Dr. Price didn’t find processed foods either, and processed foods are certainly the biggest culprit in our national health crises.   And that is exactly Pollan’s point, which he conveys beautifully.  It is not high-fat foods, which cultures have subsisted on for thousands of years, that are causing our health problems.  It’s processed, industrialized food, plain and simple.  As Dr. Price showed, wherever the foods of civilization go, so go their diseases–heart disease, cancer, type II diabetes, digestive disorders, etc.  None of the foods in our supermarket, especially those in the middle aisles, resemble anything that traditional people ate.  Nor anything our great grandmothers ate.  And as our health epidemics escalate, it’s getting harder and harder to escape the elephant in the room.

So then what’s my problem with Michael Pollan?

After tearing down the lipid hypothesis, after tearing down the nutritional fads of the past forty years, after celebrating the wonderful diversity in traditional diets, he reaffirms the one-size-fits-all USDA low-fat-low calorie food pyramid by saying, “Eat food. Not a lot. Mostly plants.”  This is not what Dr. Price found!  And it’s not what other researchers, missionaries, explorers, colonialists and scientists found when the Western world started coming in contact with so called non-civilized cultures.

So I think I can say it better.  Ready?  Here goes:

First off, I realize what Pollan meant by “Eat Food” was exactly to eat real food.  This is really the essence of what he writes about.  But I think “eat real food” says it a little better and a little clearer.   But that’s where the similarities end.  The last two, “Not a lot” and “Mostly plants,”  I take issue with and believe I can make a much clearer distinction about what we should eat and why.

So let’s look at his second statement. “Not a lot.”  Of course we should not overeat.  And of course Americans overeat.  I get it.  Everyone gets that.  But again this statement is reaffirming this idea that’s been conditioned into us which is that for good long term health we should not eat a lot of calories.  We have weight-loss programs, books, and marketing schemes making millions off this idea.

I say this all the time, and I can’t emphasize it enough:  It’s not how much you eat, it’s WHAT you eat that really matters.

In his groundbreaking book, Good Calories, Bad Calories, researcher Gary Taubes shows how subjects on long-term low-calorie diets do lose weight but how a heavy price is paid.  Subjects consistently report constant hunger, cravings, cold body temperatures, reduced energy, decreased blood pressure, anemia, inability to concentrate, and a decrease in sexual interest.  Upon completion of the diets, the subjects almost always overindulged and put the weight back on and more.

The Importance of Animal Foods

And finally, “Mostly plants.”  This is the one that really makes my eyes roll.  If I had a dime for every time I heard someone say that all you have to do is eat more fruits and vegetables, I’d be a very rich man.  Of course plants are an important part of most diets!  Everybody knows that.  They deliver essential nutrients in the form of minerals, vitamins, fiber, antioxidants and so forth.  But, let’s get back to common sense for a minute.

In his decade-long study of traditional peoples, Dr. Price did not find many cultures eating primarily plant-based diets.    Generally speaking if you were to take the USDA food pyramid and reverse it, you would find a much better representation of traditional diets.  Fat and protein formed the foundation.  Carbohydrate foods formed the middle and top.

Again, this is just common sense.  Humans have adapted to a wide range of habitats, many of which do not have fertile farmland.  In fact, there are more regions on planet Earth not suitable for farmland than those that are.  In those regions, humans fish, or they domesticate animals, or hunt, or do a combination of these things depending on the ecosystem.

A Complete Source of Protein and Cholesterol

There are a lot more reasons why animal food-based diets are a better model for health.   Unlike plant foods, animal foods represent a complete source of protein.  They also contain cholesterol, which plays dozens of essential roles in the body including the inflammation process.  If you have surgery or a dental procedure, your cholesterol will temporarily skyrocket.  Once the body heals itself, the high cholesterol comes down.  Likewise, remove inflammatory foods such as sugar, grains, and trans fats, and watch your high cholesterol come down.

Vitamin A and D

Finally, many plants have anti-nutrients in them that are difficult on the human digestive system.  Grains, even whole ones, are not always the nutritious foods that they’re made out to be.  Gluten, the main protein in wheat, barley, and rye, is causing widespread problems in our culture right now.  It’s a very difficult protein for the body to break down.  Grains, as well as beans, nuts and seeds also contain naturally occurring substances called phytates, which block the absorption of a number of vitamins and minerals.  Sprouting, soaking, and fermenting neutralizes phytates at the same time it increases nutrient concentration.  However, few people do this anymore.   And don’t count on Kellogg’s to do it anytime soon.

So when it comes to saying what we should mostly eat, I think “mostly local” says it so much better.  Saying we should eat “mostly plants” immediately gets bogged down in the controversial science of fats, carbs and protein–the very “nutritionism” ideas that Pollan is trying to escape from in the first place.  And “mostly local” is just common sense.  It’s large-scale agricultural practices and the corporate policies that promote them that are destroying our environment, destroying our health, and are in turn creating food shortages around the planet.   It is clear beyond a shadow of a doubt that these large-scale practices are NOT sustainable.

The answer lies in small-scale, sustainable food systems.  These can feed the planet, even in cities.  In fact, just today I came across this article about a UN report that refutes the notion that only industrialized agriculture can feed the world:  http://news.change.org/stories/we-dont-need-industrial-agriculture-to-feed-the-world-un-report-says

What Asia taught me about eating local

I have traveled extensively in Asia and my favorite part of Asia is the urban food markets.  These bustling, colorful markets are present every day, on the streets, on the sidewalks, in the alleys, at all times of the day.  The food is always fresh and, of course, always local.  It feeds entire cities.  This model may not be adaptable to the US urban landscape quite yet but even rooftops, balconies, lawns, and small backyards can yield a surprisingly diverse and large amount of food.  Sooner or later (and probably sooner), we’re all going to have to re-learn some of the ways our great grandparents went about raising food.

Finally, local, sustainably grown foods are healthier for you and for your children.  They’re better for the health of the animals.  They’re better for the health of our communities.  They keep farms alive and support local farmers. They promote biodiversity and prevent over development.   And they are less dependent on oil as industrial foods (including organic ones) must travel long distances from farm to fork.  To put it simply, local foods are just better for our planet.  Period.  Ironically, this is the essence of what Michael Pollan has so eloquently taught us.  I just think I outdid him at his own game.

So there you have it.

Think you can do better?  Try it!  It’s fun.  Leave a comment below with your own version.