So many seafood books and seafood cookbooks, so little time. If you’re a seafood lover like myself, you understand.

Now while I’m on the topic of seafood books, let me take this opportunity to announce for the first time that I will be adding my own seafood cookbook to the mix. I’ve just started the initial phase of research for my next cookbook, New England Soups from the Sea.

UPDATE: it is now available! See below for details.

I could not be more excited about this project.

Briny seafood stocks, brothy shellfish soups, rich chowders (such as mussel chowder), elegant bisques (like crab bisque), succulent seafood stews (like Zuppa di Pesce) and so many other beautiful soups from the sea will all be included. These are the soups that truly stir my soul. Ever since I was a kid, when my parents first took me to Red Lobster and I had my first bowl of lobster bisque, I’ve had a love of seafood soups. In the process of doing research, I’ve discovered some incredible seafood books that will live in my kitchen until the day I die.

And I want to share them with you today.

Now they’re not all seafood cookbooks. One is actually an amazing work of nonfiction! But what they all have in common is a love and passion for all things seafood. If you also love seafood I’m confident you’ll find at least one book that appeals to you.

These are what I consider the best seafood books you can find today.

I’m not shy to put my own seafood cookbook first. I spent 3 years researching the history of New England seafood soups and developing recipes. I’m darn proud of it and I want the world to know about it.

It includes detailed info on how to support local fishermen and fisherwomen and how to avoid the global seafood trade that is damaging our oceans. It also includes 39 profiles of local New England fish and shellfish.

I promise you there is a lot more to New England soups than just clam chowder and lobster bisque!

Click here to see New England Soups from the Sea.

In alphabetical order starting with abalone and ending with wreckfish, American Seafood by Barton Seaver catalogs every species of fish and shellfish in American waters, with comments on their social, historical, and culinary qualities. This includes all the lesser-known species, many of which Seaver advocates for consumption to help diversify and sustain our national fisheries.

Beautifully photographed, encyclopedic in scope, ecologically conscious, rich in the history and culture of seafaring communities, and sprinkled with great recipes and cooking tips, this is one of the most thorough seafood books ever written. A must-have for any seafood lover.

Want to know how to prepare and cook any type of fish? Fish and Shellfish by chef James Peterson has it all covered. There are chapters on baking, braising, deep-frying, grilling and boiling, poaching, pan frying, marinating, curing, smoking, steaming, microwaving, and even preparing raw fish, all with tons of awesome recipes included.

Want to know how to prepare and cook shellfish a certain way? Again, it’s all covered here. There are chapters on mussels, clams, oysters, scallops, lobster, shrimp, crab, crayfish, squid, and octopus, each one chock full of both common and creative recipes.

The Provincetown Seafood Cookbook by Howard Mitchum is my absolute favorite seafood cookbook. A moving foreword by Anthony Bourdain sets the tone for just an awesome cookbook that is enriched throughout with Mitchum’s personal stories, his knowledge of the cultural history of Ptown, and his sheer enthusiasm for the recipes.

Every fish and shellfish is given its own chapter with dozens of traditional recipes. But my favorite chapter is, of course, Beautiful Soups and Stews, which includes dozens of mouth-watering recipes such as Quahog Chowder, Portuguese Clam Chowder, Fish Head Chowder, Squid Stew, Provincetown Paella, Cape Cod Gumbo, and Cape Cod Cioppino.

This book isn’t specific to just seafood but the seafood chapters are so fantastic that I feel the need to include it here. Published in 1949, The Soup Book by renowned chef Louis P. De Gouy, showcases traditional soup recipes with a fascinating array of fish and shellfish species. Though from a bygone era, I feel these recipes are important to rediscover if we are to reinvigorate and reestablish our coastal seafood economies.

This book would make a great companion to Seaver’s American Seafood because it has recipes for the lesser-known species of fish that Seaver advocates for consumption. In particular, the chapter on chowder is chock full of fascinating old-time recipes including Flounder Chowder, Perch Chowder, Sturgeon Chowder, and get this… even a Turtle Chowder. Yikes! But most of the recipes include more familiar chowders such as clam, mussel, fish, and lobster.

Another historical gem of a book, the Long Island Seafood Cookbook by George Frederick was published in 1939 and documents a hyper-local seafood culture that has long since disappeared. It’s a fascinating example of the native seafood dishes that were common to coastal communities prior to the widespread industrialization and homogenization of our food supply.

For example, there are recipes for Bayside Clam and Corn Chowder, Stony Brook Oyster Chowder, Manhasset Stuffed Clams, Hauppauge Broiled Mackerel, Smithtown Bay Mussel Soup, and my favorite, Port Jefferson Scalloped Oysters (because that’s my hometown). If you are a Long Island native like myself, it’s a rare and precious book as there are few if any cookbooks specific to Long Island.

Two If By Sea

Barton Seaver’s seafood books are so great that I had to include one more from him. The first one above, American Seafood, is more of a compendium on all things seafood. But Two If By Sea is a pure cookbook with tons of amazing recipes, insights, and tips from an acclaimed chef.

Of course, my favorite chapter is “Fish Stocks, Soups and Stews” which includes doozies such as a Spiced Coconut Broth with Shellfish, Portuguese-style Clam Chowder, Fish Pho (the whole book is worth it just for this recipe!), as well as creative takes on favorites such as cioppino, bouillabaisse, oyster stew, and lobster bisque. You’ll also find great chapters on appetizers, seafood salads and sandwiches, and seafood pasta and rice.

50 Chowders includes recipes for different types of fish chowder, shellfish chowders such as mussel, scallop, shrimp, and lobster, and farmhouse chowders made from a variety of vegetables.

All recipes are accompanied by insightful “Cook’s Notes” that offer helpful tips and variations.

Although a fictional account of a friendship between a fisherman and a stranger, Blues by John Hersey is really about the age-old relationship between mankind and the sea.

The story is told via the life cycle of the bluefish, one of the more resilient, voracious, and mysterious fish in the sea, and an old fisherman’s incredible insights for catching them based on observing (and respecting) the rhythms and patterns of the sea.

It’s a wonderful tale about the joy of fishing and yet a stern warning of the ecological impact of overfishing. It also includes some wonderful bluefish recipes at the end of each chapter!

Written in 1987, Blues is one of the more fascinating fictional seafood books ever written. It has stood the test of time and is widely considered a classic.

It’s hard to imagine that a nonfiction book about a single species of fish could be a page-turner. But there’s a reason Cod was given the prestigious James Beard Foundation Book Award for Writing on Food.

Cod is about more than just the fish itself. It’s the story of how it changed human civilization, altered the economies of Europe for a thousand years, sustained epic seafaring journeys across the Atlantic, and contributed to America’s independence from Britain.

It’s also a story of greed, overfishing, and the shocking collapse of the cod stock in the 20th century, a stock that was once so abundant that it was thought impossible it could ever be depleted.  A brilliantly written book and a truly fascinating read.

A wonderful little cookbook, Simmering the Sea: Diversifying Cookery to Sustain Our Fisheries, showcases the lesser-known fish of New England that are just as delicious as their more famous counterparts. This includes species such as mackerel, herring, squid, butterfish, rock crabs, flounder, sea bass, porgy, bluefish, and skate.

Buying these fish helps to support small-scale sustainable fisheries. And because these fish are no longer in demand they often command quite affordable prices compared to fish like cod, salmon, and tuna.  For example, I got an entire pound of mackerel recently for $5.99. That fed me for three meals. And it was insanely delicious.

This is a remarkable one-of-a-kind cookbook that can help restore our relationship with a more balanced, diversified, and sustainable, and local way of eating seafood.

Did you know that 90% of all seafood Americans eat is now imported? This is absurd when you consider how much seafood is readily available from our own shores.

In American Catch: The Fight for Our Local Seafood, author Paul Greenberg details the shifting economic and environmental landscape of three previously prolific American fisheries – oysters, shrimp, and Alaskan salmon. For example, Americans now choose cheap, ecologically damaging farm-raised shrimp from Asia over healthier, more sustainable shrimp from our own waters. But it’s not all gloom and doom. There are also stories of hope, with fisherman and environmental activists joining together to renew and sustain our fisheries in unique and heartwarming ways.

Well, there you have it! I always loved seafood since childhood and whenever I go outside to eat, seafood is always my first choice. Let it be Red Lobster or any other seafood restaurant, I always enjoy eating lobster and shrimp. 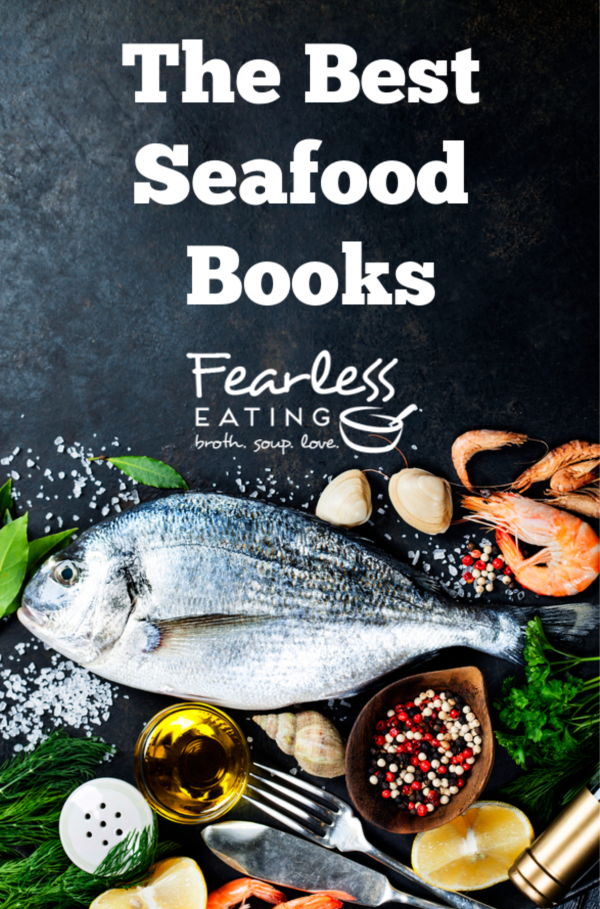