How and Why to Make Pork Broth

Pork broth, also called pork stock, is a common bone broth in many parts of the world. For example, in many countries throughout Asia, pork broth is used as a base in countless varieties of noodle soups, congees, curries, and stews. But here in America, you don’t see it as often. In fact, as far as I know, I’ve never seen a store-bought pork broth or pork stock product.

I find that a little odd as there are just as many uses for pork broth as there are for chicken and beef broth. Furthermore, with the increased interest in making REAL homemade bone broths, I’ve noticed the price of bones rising in recent years. The beef bones in my local health food store are no longer the steal they were a few years ago. And of course, pastured chicken isn’t cheap either. And that’s just one of several reasons you should consider making pork broth!

1. Pork broth is the cheapest broth to make at home

Hardly anyone makes pork broth/pork stock anymore!  For that reason, pork bones are often considerably cheaper than other types of bones (with the exception of fish bones).  In fact, it can be difficult to even find pork bones for sale in supermarkets.  They’re rarely on display.  However, if you ask your local butcher they’ll probably be happy to give you some at a very reasonable price.

2. Pork broth has a similar flavor to chicken broth

Broth purists and trained chefs will surely disagree with that statement.  But I’m neither and most people I know aren’t either. In my experience, they’re not that different AND they’re totally interchangeable.  If I’m making a recipe that calls for chicken broth but all I have is pork stock, I’ll use it instead and vice versa.

3. If you use pigs feet, you’ll get a super gelatinous broth

So many people tell me they struggle to make a gelatinous broth from chicken.  There can be several reasons for this.  One of the more common ones is that if they’re just using bones, there may be very little collagen attached to those bones.  Well, there’s tons of collagen in pigs’ feet. Like so…

I picked those feet up from my local butcher for just a few bucks each.  Look at all the collagen in there!

Collagen is the strong but pliable connective tissue that keeps animals (including us) glued together such as tendons, ligaments, cartilage, joints, and skin.  And when you simmer all that in a broth, it breaks down into gelatin.

That’s why we want to use not just bones but other collagen-rich animal parts in a good homemade bone broth. The more gelatin, the more nutrients.

4. Pork broth is easy to make

If you’ve made chicken broth, well, you know how to make pork broth.  The process is just about the same.

How to Make Pork Broth

To make about 4 quarts of pork broth, get about 4-5 pounds of pork bones from your local butcher or even better, your local farmer.  A variety of different types of bones is good – leg, neck, hip, and rib bones.  Like so…

Roasting will develop more flavor.  You can always skip this step if you’re short on time.

If you have a dog, give them a few RAW pork bones first.  Otherwise, they’ll be begging you for the roasted ones (which dogs shouldn’t have), like so…

Needless to say, Lipton was not happy when I told her that I forgot to save a few raw pork bones for her (but I made it up to her by making some homemade dog treats from the scraps of the broth).

Next, place the bones in an 8-12 quart stockpot, add in the vegetables, cover the bones with water and bring it to a boil.

Skim the scum that forms on the surface for a few minutes and then reduce the heat to a very gentle simmer for 4-24 hours.

Strain the broth and transfer it to storage containers.

5. Because you can make so many fantastic pork soups!

As mentioned above, almost any recipe that uses chicken broth can use pork broth as a substitute. But I love using pork broth in Asian soup recipes. My cookbook, The Thai Soup Secret, contains dozens of recipes that use pork stock, including one of my favorites for a Thai pork noodle soup.

Recipes That Use Pork Broth 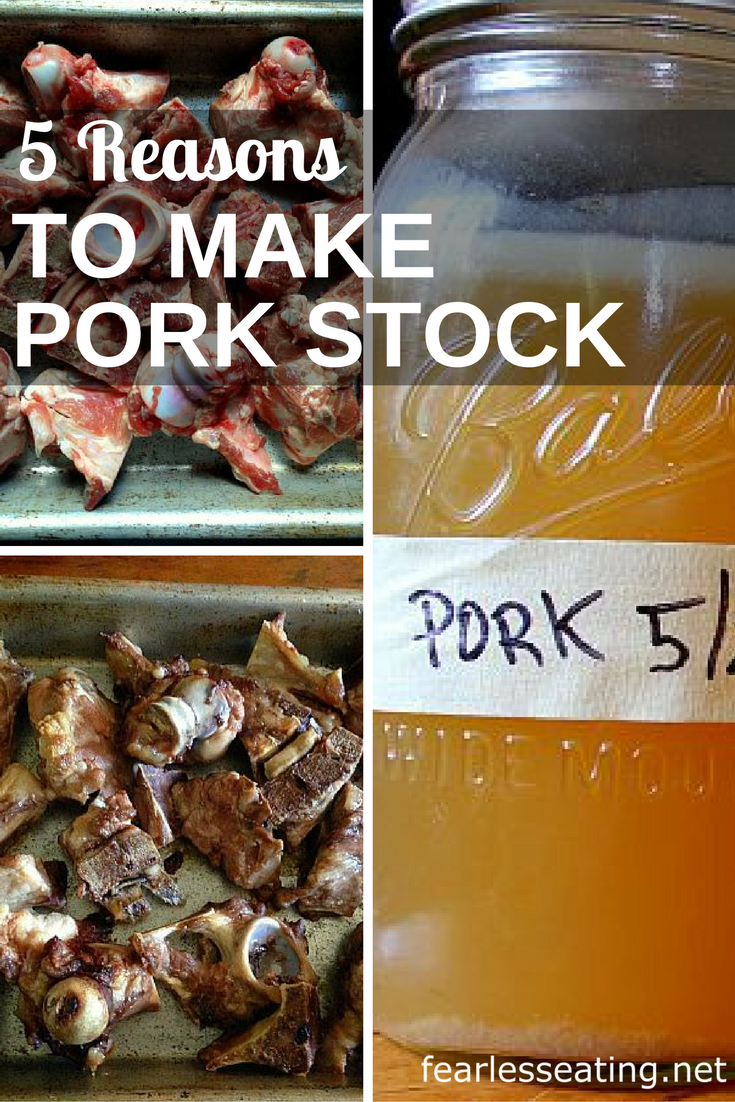